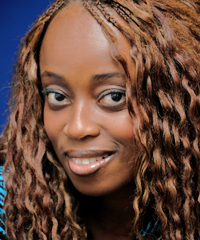 Alert! Authors Marié Heese and Adaobi Tricia Nwaubani have won the Commonwealth Writers Prize – Africa region awards, for their novels The Double Crown: Secret Writings of the Female Pharaoh, which took the Best Book gong, and I Do Not Come to You by Chance, which was acknowledged as Best First Book. Heese and Nwaubani each win £1 000, and go on to compete for the overall prizes of Best Book (£10 000) and Best First Book (£5 000) in May.

The works were each selected from shortlists of seven. The announcement was made in Johannesburg this morning, at the SABC’s Radio Park campus, where Lebo Mashile – a Noma Award winner – presided over addresses by the British High Commissioner, Nicola Brewer, Commonwealth Writers’ Prize Africa Region judge Dan Ojwang, chairperson of the Africa Region prize, Elinor Sisulu and the SABC’s Phil Molefe. Brewer and the Acting High Commissioner of India, Shri Shambhu Kumaran, announced the winners.

Heese hails from Stilbaai in South Africa’s Western Cape, and is previously best-known for her children’s books. She publishes in both Afrikaans and English, and is the daughter of the revered Afrikaans author Audrey Blignaut (see her book on her mother, Audrey Blignault: uit die dagboek van ‘n vrou). The Double Crown has emerged as the winner from an extremely strong field, which included the likes of Chimamanda Ngozi Adichie, Mark Behr, Zakes Mda and Andrew Brown.

Nwaubani keeps Nigeria’s “Best First Book” winning streak alive, following as she does in the footsteps of a certain Uwem Akpan, who rose to the heights of world literature after winning the prize last year and going on to become an Oprah Book Club choice. “I was born in Enugu, Nigeria,”, she tells African Writing in a comprehensive 2009 interview, “A year later, my parents moved to my hometown, Umuahia. I spent the first part of my childhood years in Umuahia Town—in the GRA, close to the railway station, amongst the expatriates and the Rotary Club members.” In a refreshing development for Nigerian letters, Nwaubani remains based in her home country. Her fellow shortlistees included the likes of Ghana’s Ayesha Harruna Attah and South Africa’s Alistair Morgan.

It is noteworthy that of the 14 books that made it onto the shortlists this year 10 are by women, which is unprecedented in the history of the CWP, Africa Region.

Given the exceptional depth and variety of books submitted for the prize, it is not possible to reflect at length about every single highpoint. However, there are a few interesting trends about which the panel of judges would wish to comment. These broad trends can be seen in the thematic content of the books, elements of interesting formal innovation and also areas of glaring problems.

One of the remarkable aspects of the entries was the high number that concentrated on human trafficking and migration. The most striking of such novels were Eyo by Abidemi Sanusi (Nigeria), On Black Sisters’ Street by Chika Unigwe (Nigeria) and Refuge by Andrew Brown (South Africa). Reading these entries, the panel of judges was struck by the way slavery, in new guises, has come to speak powerfully of the plight of a generation of Africans who have come of age at a time of destitution, political repression and out-migration—a time when home is all too often quite unhomely. Yet, in spite of the harrowing experiences presented in these novels, none of them resort to the neat endings that readers may expect after being shown so much suffering.

Here are condensed blurbs for both books:

“I am the chosen of the Gods. I have always known that. This knowledge has been the source of my strength and power, and it is the reason why I know that those who now seek my death and desire to usurp my throne shall not succeed.” Marié Heese breathes literary life into the bare historical bones of ancient Egypt’s female pharaoh, Hatshepsut, with breathtaking success. She recuperates ancient Egypt for contemporary gender politics while also providing a highly imaginative account of how life may have been lived in the ancient world. A female leader who realizes her political ambitions in a male world, constantly confronting the challenges of wielding state power at an enormous personal cost, Hatshepsut provides a wonderful protagonist for a modern feminist readership. Hatshepsut’s voice is compelling, direct, insistent and totally believable.

I Do Not Come to You by Chance

“I do not come to you by chance. Upon my quest for a trusted and reliable foreign businessman or company, I was given your contact by the Nigerian Chamber of Commerce and Industry ….” There are few e-mail users around the world who have not received a ‘419’ letter promising them a large share of an equally obscene amount of money. We have all wondered about the people behind these scams. Adaobi Tricia Nwaubani’s novel provides some of the answers. Taking its title from the opening line of an e-mail scam letter, I Do Not Come to You by Chance provides a behind-the-scenes look at the 419 phenomenon, which takes its name from the section of the Nigerian Criminal Code which deals with advance-fee fraud.

You can read the first chapter of Heese’s The Double Crown via the Little White Bakkie preview service below (click here if it doesn’t load). Nwaubani’s UK publisher, Orion, has made chapter twelve of her book available online: click here to read an excerpt from I Do Not Come to You by Chance.

Heese has also compiled “reading notes” on her novel; take a look:

Readers Guide to The Double Crown by Marié Heese

Congratulations to both winners, who now go on to compete with other regional winners for the overall “Best Book” and “Best First Book” awards, to be announced at a ceremony held in Dehli, India, just a few weeks from now.

Best of luck to Heese and Nwaubani!.