Michael Stanley Wins a Barry Award for Death of the Mantis 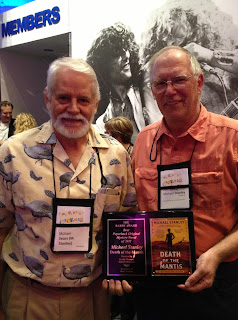 Alert! Michael Stanley, the crime fiction-writing duo made up of Michael Sears and Stanley Trollip, have won a Barry Award in the “Best Paperback Original” category for Death of the Mantis.

The Barry is awarded by the USA’s crime/thriller fan magazine Deadly Pleasures, and was announced last week at the Bouchercon mystery writing conference in Cleveland, Ohio.

Last year, Deon Meyer was awarded the Barry in the “Best Thriller” category for Thirteen Hours.

The opening ceremony and reception has taken place at Bouchercon on Thursday evening. The event took place at the Rock and Roll Hall of Fame.

The Awards given out were the Macavity Award and the Barry Award.

The results are as follows –

Read Tim Hallinan’s coverage of Bouchercon, including the awards ceremony, on the Murder is Everywhere blog:

It’s Saturday night and my vocal chords have been shredded to terrycloth by three days of shouting affectionately (sometimes adverbs do clarify) at people in crowded, deafeningly loud hotel ballrooms and corridors.

I’ve had the time of my life, and so have a hundred or more other writers and about 1500 amazingly sweet and patient fans.