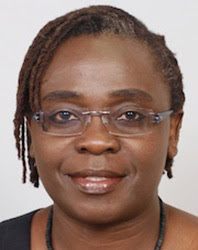 Alert! Uganda’s Jennifer Nansubuga Makumbi has been announced as the winner of the Kwani? Manuscript Prize for her unpublished novel, The Kintu Saga. Liberia’s Saah Millimono was awarded second place for One Day I Will Write About This War and Kenya’s Timothy Kiprop Kimutai came in third with The Water Spirits.

Makumbi said that “When you have been writing as obsessively and for as long as I have, winning a competition like this one is like stepping out in the sun after a protracted period in the dark” and Mahjoub commented that all three of the winning manuscripts “display an urge to engage with the complexities of modern day Africa”.

Congratulations to the winners!

Uganda’s Jennifer Nansubuga Makumbi has won the Kwani? Manuscript Project, a new literary prize for unpublished fiction by African writers, for her novel The Kintu Saga.

2nd place has been awarded to Liberia’s Saah Millimono for One Day I Will Write About This War and 3rd place to Kenya’s Timothy Kiprop Kimutai for The Water Spirits.

Winner Jennifer Nansubuga Makumbi said:
“It is hard for me to express my joy because sometimes language can be limited – even for a writer. When you have been writing as obsessively and for as long as I have, winning a competition like this one is like stepping out in the sun after a protracted period in the dark.”

Chair of Judges, Jamal Mahjoub said: “All three titles chosen by the judges display an urge to engage with the complexities of modern day Africa. They tackle issues such as civil war, the struggle against poverty, and the continent’s historical heritage, among other themes. As a manuscript award this prize naturally seeks to focus less on finding a perfect finished product than work which shows literary promise as well as a breadth and depth of vision. The winner and two runners up all reflect these values.

The winner, Jennifer Nansubuga Makumbi’s The Kintu Saga, is an ambitious attempt to bring the history of Uganda into the present lives of the novel’s protagonists. Through successive generations, the author sketches out the continued relevance of the past in the present.

In 2nd place, Saah Millimono’s One Day I Will Write About This War provides a moving portrait of a young boy in Liberia who finds the hardships of his life relieved by the family of a girl he meets at school. Their lives are turned upside down with the arrival of the civil war.

In 3rd place, Timothy Kiprop Kimutai’s The Water Spirits shows great maturity in its depiction of characters and the relationships between a single mother and her two children. The author deftly manages to tread a fine line between the state of the mind and the world of the imagination.”

Judge, Ellah Wakatama Allfrey said: “Reading the entries for the Kwani Manuscript Project afforded the greatest of luxuries – a sneak peek at the publishing possibilities of a continent, the novels that will, all good things permitting, find their way to readers in the near future. There were historical novels, domestic-focused dramas, tales of war and of love. Even a steam-punk narrative that especially delighted this reader’s heart. The aim had been to prod the ambitions of writers across Africa and her diaspora and the ambition, talent and skill exhibited in the long list was exhilarating. Even beyond the very deserving winner and the two runners-up, there are books on the longlist that deserve to find their readers in the wider world. It was a unique experiment, that will, I believe, culminate in reading pleasure for many, on the continent and beyond.”

The Kwani? Manuscript Project was launched in April 2012 and called for the submission of unpublished novel manuscripts from African writers across the continent and in the diaspora. The prize received over 280 qualifying submissions from 19 African countries. In 12th April 2013 a longlist of 30 was announced and on 17th June a shortlist of seven was announced. Also shortlisted for the prize were:
Ayobami Adebayo, Stay with Me (Nigeria)
Ayesha Harruna Attah, Saturday’s People (Ghana / US)
Stanley Gazemba, Ghettoboy (Kenya)
Toni Kan, The Carnivorous City (Nigeria)

Kwani Trust’s Managing Editor, Billy Kahora said, “In reviewing the shortlisted stories, I’m blown away by the potential these manuscripts hold, the different styles, concerns and voices that they bring to new contemporary African literature, and further add to Kwani’s fiction list. We can’t wait to bring them out as novels in the region and partner with publishing houses across the continent to make them available across Africa.”

Kwani Trust plans to publish the winners, as well as additional manuscripts from across the shortlist and the longlist , with the first titles planned for publication in April 2014. The Trust will also be partnering with regional and global agents and publishing houses to secure high profile international co-publication opportunities.

Kwani Trust is also indebted to Lambent Foundation for financial support towards the administration of this project, as well as the Prince Claus Fund for a Euros 25,000 prize in recognition of the Trust’s work that acted as seed money for this project.

Jennifer Nansubuga Makumbi is an Associate Lecturer at Lancaster University where she completed a PhD in Creative Writing. She was born in Uganda and moved to the UK in 2001 to study for an MA. She lives in Manchester with her husband Damian and son, Jordan. Her work has been published by African Writing Online and Commonword. She also runs the African reading group, ARG!, in Manchester which focuses on obscure African writers. She is currently working on her second novel.

Synopsis At dawn, on Monday the 5th of January 2004 in Uganda, the curse of Kintu strikes. Kamu Kintu is brutally murdered by a mob in Bwaise. Three months later, ten men involved in his murder are found dead, their bodies strewn along Bwaise’s main street. The story then travels back to 1750, to the beginning of the curse in the old kingdom of Buganda. The Kintu Saga follows the misfortunes of the Kintu clan over 250 years, blending Ganda oral tradition, forms of myth, folktale and history with biblical elements. The novel explores ideas of transgression, curse and perpetuity, looking back at the history of Buganda Kingdom and tracing birth of modern Uganda.

2nd Place: Saah Millimono. One Day I Will Write About This War

Saah Millimono was born in 1981 and is a graduate of St. Michael’s Catholic High School in Monrovia, Liberia. He worked for 6 years as a freelance fiction writer for the Liberian Observer Corporation and in 2009 won the Short Fiction Prize of the Sea Breeze Journal of Contemporary Liberian Writings.

Synopsis Tarnue and Kou are from different backgrounds, young, ambitious, and in primary school. Suddenly the Liberian Civil War erupts; they and many others are altered in ways they could hardly have thought of. One Day I Will Write About This War tenderly explores this unlikely childhood friendship and multiple human costs of war.

Timothy Kiprop Kimutai is 27 years old and interested in finding an audience for his stories. He participates in creative writing workshops with Amka Space, a writing forum provided by the Goethe Institute in Nairobi.

Synopsis Kogi sees an alternate world when his mother points a knife at her chest ready to plunge it in. He finds a girl lying unconscious by the river, carries her home and lets her live in their chicken house – all the while thinking that she is a water spirit. He dreams of bringing back rare chicken breeds from the brink of extinction. The Water Spirits places the mysterious alongside the quotidian, exploring Kogi’s relationships with the water spirit, his newly-widowed mother Susanna and sister Chebet, and the pains of feeling powerless.

Images courtesy The Star and The Kwani? Manuscript Project