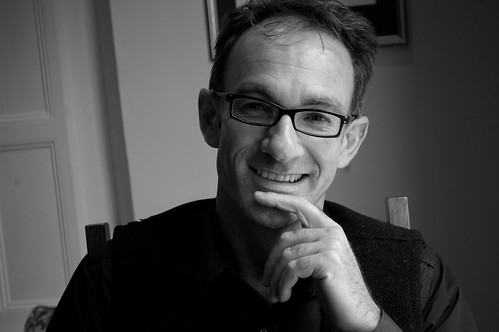 The Genesis: Eben Venter on the creative origins of Wolf, Wolf, which was recently shortlisted for the 2014 Sunday Times Fiction Prize:

The father loves his son. The son tries to love his father. At times the father is like a menacing wolf with all his how-to-live codes. The son fails miserably. Yet in his dying days it is this very son who cares for the old man.

These complexities are present in father-son relationships. I know it, I hear about it.

Whenever I visited South Africa I stayed in the Rondebosch and Observatory areas of Cape Town. My senses were on alert. I’d notice strollers and their dogs skirting the bergies on the Rondebosch Common, or two plump policemen entering a fish & chips shop on Main Road, waiting their turn in the queue like proper citizens. And on my way to the inner city I always passed an elegant Cape Dutch home secured by fleur-de-lis fencing.

So my father and son story found its location. Then I inserted all sorts of smaller stories into the big one so that it would move fast and furiously ahead. That’s how I experienced my country after ’94: fast and furious. And surprising. And beautiful too.

At the time I became enamoured with pornography. I couldn’t get enough of all the images freely available on the internet, 24/7. Maybe the son did take note of the Old Wolf’s cautioning codes at this point and he started reading about the effects of obsessive porn-watching on the brain. This was how the character of Mattheüs, the protagonist of the story, started gaining flesh.

Then one day the father died and everything changed, just like it did in South Africa. The age of inherited privileges was over. The son had to step out and fend for himself. He displayed courage and integrity, exactly the way he was taught. But now there was another menace. It came at a time and in a way the son couldn’t possibly have expected, and it left him powerless. It was like the children’s game they used to play, gingerly walking behind the wolf, never knowing the hour he was going to call out and get you.

At one o’clock on the dot he walks into the room with a tray of food for his dying father. Privately he uses the word dying in lower case – unlike the oncologist who rubs it in: I give your father another month or so. He’s also taking along a request that he may be ashamed of. And yet he will – he wants to – ask his father for the cheque so that he can start his own business. Every word has been sifted and weighed; and lunch is tomato and lamb stew, his father’s favourite.

He’s surprised to find the old man propped up already, his back against two cushions – the willpower that must have taken. Without preamble, the voice issues from the decrepit body, forceful and peremptory, just as he remembers it. Pa wants to be moved from the bedroom to the study. Irrespective of Mattheüs’s opinion concerning his condition.

“Now, this afternoon, Mattie.’ He says: Now. This. Afternoon. “No point in putting it off, my son. I’m here on borrowed time.” He inclines his head towards the spot where he imagines Mattheüs is standing with the tray of food, pinning him to the striped kelim, the eyes behind their closed lids holding him captive.

For weeks now, he’s been mulling over the request, considering its consequences: in truth, it’s a final favour to the dying man. His father would depart serene in the knowledge that his son is not a wastrel: Mattie will land on his feet again. He’d bought lamb and ripe tomatoes and baby carrots and left it all to simmer. He’s thought of everything.

His saliva thickens in his mouth. The entirety of what he hasn’t planned for flashes before him: double bed, mattress, bedside cabinet with pills and medication and special sweets for dry mouth and the Sorbolene, all Pa’s clothes and handkerchiefs and toiletries, slippers – the pictures on the walls can surely be left behind? – everything will have to be schlepped across. The bed remade and pillows shaken down and puffed up and, finally: the frail body. And then the grumbling at the slightest mishandling. Now. It must all happen now. The cheque he wants to ask for, his carefully considered request, is fading into the background. He’s beginning to tread water.

He’s facing a man who’s never been known for his tact, at least not in his own home. Who wants to be moved just as the week is drawing to a close, the day almost at an end. And his father knows perfectly well that Friday evening is his night on the town with Jack. Part of his plan was that they’d kick off with a double brandy, a shooter or two in between, then an ice-cold beer. (The cheque by now snug in his pocket.) At dusk he’d come to say his goodbye, his hand in his father’s, with its thin, worn papery feel. Take my car, Pa would say, as always. And even though Mattheüs knew that he and Jack would get wasted, he’d take it all the same.

The study is on the south side of the house, while the en-suite master bedroom is on the north; the mattress and base will have to lugged all the way down the passage to the entrance hall and then left into the study where they’ll need to clear a space for the double bed and all. And then, what about ablutions and going to the toilet, has he even considered that? Up to three times a night while he’s surfing the Net in the small hours, he hears Pa’s toilet flushing.

“This afternoon, then, and it’ll all be over and done with. I’m not asking for much, my son.” At the tail-end of the instruction there’s just a shred of a scruple.