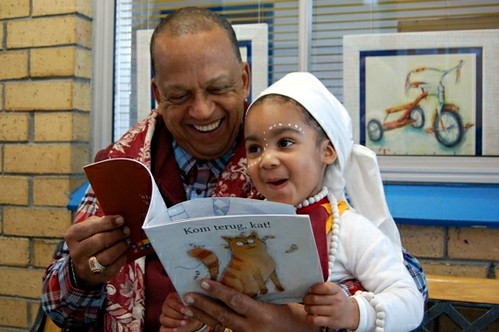 The vision of Book Dash is so revolutionary, so boldly audacious, that it is hard to comprehend fully the scope of it upon a first hearing. One can be forgiven for raising an eyebrow at the notion of giving (yes, giving!) each South African child a hundred books by the age of five. On Mandela Day last week, this grand dream stepped closer to becoming reality when some 250 children at Jireh early education centre in Mitchell’s Plain each received three books, made by a team of volunteers. For some of the children, these books were the first they have ever owned.

Books by the big-hearted authors involved in Book Dash include:

Behind this project is a formidable trio of radical thinkers: Arthur Attwell, a Shuttleworth Foundation Fellow and award-winning publishing entrepreneur has an impressive track record as the founder of Paperight, Electric Book Works and Bettercare. He is also a poet and the author of the collection, Killing Time.

Senior manager at Paperight, Tarryn-Anne Anderson, is a talented short story writer who contributed to the Feast, Famine and Potluck anthology and an anthropologist by training. She is the community manager for Book Dash. Michelle Matthews, a publisher and award-winning writer, specialises in sustainability and corporate social investment. She is the managing editor of The CSI Handbook and the author of The Whole Food Almanac. With their feet planted firmly on the ground they envision an outcome with astronomical potential.

They want to see the publishing industry being shaken from its roots and predict that this can happen if the needs of the youngest reader are met as a priority. “This is how the future of publishing in South Africa is not only going to survive, but grow and flourish,” Attwell said.

It is widely believed that a range of interwoven social ills and contemporary crises can be avoided and solved by enhancing the cognitive skills and developing the child’s imagination by ensuring that a vigorous love of reading is instilled before children even get to school. But how can that happen in a society where the all too real constraints of poverty seem so overwhelming?

Book Dash’s solution is to make books freely available as downloads so that schools – or anybody who needs a free children’s book – can print them out on a standard photocopier. The cost of the books is reduced substantially to the expense of printing. All the expertise has been donated. No royalties are paid as books are created under the Creative Commons Attribution license.

Attwell also believes it is crucial to support fathers in the task of reading to their children. The logo on the back of each book depicts a father in an armchair holding a small child on his lap, reading from an open book.

The big push for this project took place just three weeks before the Mandela Day handout when a team of 40 industry professionals got together bright and early on a cold Saturday morning. Writers and artists brought their previously planned story ideas and sketches, channeling them through the various tools of the trade: tablets and paintbrushes, laptops and scanners.

The mood in the room was electric, as designers and editors tweaked and touched up the texts, authors consulted other authors, and images took shape, matching the narratives. By the end of the day ten new books existed that would soon be touched and held and loved by the children who hunger for stories. This staggering book-making marathon occurred on 28 June this year at the City of Cape Town’s Central Library, in a collaborative gesture of generosity, care and creativity.

“In essence,” says Attwell, “South African children need more books. However, books are prohibitively expensive for most families in this country, who struggle to put food on the table.” His way around this? Make them available for free! To that end, he wishes to see each child in the country owning 100 books before their sixth birthday. Yes, reader, your eyes do not deceive you. And laugh aloud if you must. But, Book Dash has started making this remarkable dream a reality.

“The cheapest books have no publisher – then the only cost is printing. So our participants do the work of publishers in a single day. After that, anyone can get print runs sponsored and put finished books into the hands of children,” says Attwell. Do the sums on that and some 600 million books are required to meet this ambitious goal. India’s Pratham Books and the African Storybook Project offered Attwell a way to refine his thinking and models on which to base Book Dash.

We believe every child should own a hundred books by the age of five. In South Africa, that means giving 600 million free books to children who could never afford to buy them. Every day we lose, more children grow up unable to read and write well, and to enjoy the worlds that books open up.

An integral part of this concept is the concept of ownership. According to Attwell, this means putting books into children’s hands. “Ownership should be sealed by writing the child’s name on the book-plate page. They must be able to collect many of their own books throughout their childhood,” he said. 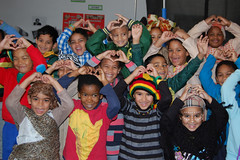 Facilitated by Tarryn-Anne Anderson with Michelle Matthews hosting the event, ten teams each comprising a writer, illustrator and book designer, were plied first with coffee and muffins, then quiches and fruit, and later, wine and pasta. Each trio had a designated work space where the creative collaboration took place on the upper floor of the old drill hall. The intense focus required to produce a book in a day, the sharing of tasks between team member, and the convivial goodwill that spilled regularly into laughter was a profound experience.

The capable squad of editors who ensured that the texts were suitably age-appropriate comprised Marion Smallbones, Glynis Lloyd and Martha Evans. Videographer, Shaun Swingler, ensured that a visual record of the event took place. Archivist and storyteller, Kelsey Weins, explained the Creative Commons Attribution licence model and took care of the twitter feed on the day. Art director, Pete Bosman, worked with the illustrators and book designers, to advise, facilitate and ensure that the images worked within the specific parameters of the project.

Watch the video made by Shaun Swingler on the day of Book Dash, held at the City of Cape Town Central Library:

Three titles of the original ten books submitted on Book Dash day were selected for printing and distribution. A Fish and a Gift by Liesl Jobson, Jesse Breytenbach and Andy Thesen; Come Back, Cat! by Karen Lilje, Nicola Rijsdijk and Sam Scarborough was translated into Afrikaans by Maya Fowler as Kom Terug, Kat!; and Sleepy Mr Sloth was created by Paul Kennedy, Nick Mulgrew and Graham Paterson. Anybody may download the source and PDF files for children needing books.

Authors Liesl Jobson and Paul Kennedy assisted the Book Dash trio with the handout at the Educare Centre. On arriving the team was greeted by strains of The Wheels on the Bus and You Are My Sunshine. The children watched with quite some bemusement as box-carrying grownups passed their music ring and then set up stacks of books on tables in the hall. Soon enough the excitement grew as they queued for their books, then received them with their names inscribed. After tea and buns and a farewell song, the day’s programme resumed. Story time will never be the same again.

Despite their phenomenal intellectual capacity, multiple degrees and highly literary pedigree, the team of Attwell, Matthews and Anderson are softly spoken and unassuming face to face. In a focused, pragmatic and determined fashion they are quietly getting on with making a significant difference to the future of the children of South Africa. They are also seeking sponsorship. What better way of honouring the legacy of Nelson Mandela?