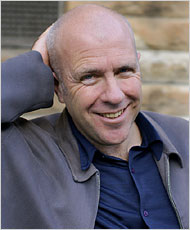 Alert! Richard Flanagan has won the 2014 Man Booker Prize for his book, The Narrow Road to the Deep North.

In addition to an instant worldwide increase in book sales, the author receives £50 000.

The win confers upon him the status of the first Man Booker winner to beat off the threat from across the pond. (Books by Americans were eligible for the prize for the first time this year.) Flanagan also has the distinction of being the first writer from Tasmania to take the gong.

Winner of the Man Booker Prize for Fiction is Richard Flanagan with The Narrow Road to the Deep North #ManBooker2014 pic.twitter.com/nYlJwHfD8s

The six contenders on the shortlist were Joshua Ferris (US), Flanagan (Australia), Karen Joy Fowler (US), Howard Jacobson (British), Neel Mukherjee (British) and Ali Smith (British). Each received £2 500 as a kind of pre-consolation prize for possibly missing out on the main gong.

Mukherjee – whom South Africans got to know when he attended the Open Book Festival in Cape Town in 2011 – was the bookies’ favourite for The Lives of Others, while in a Guardian poll, readers backed Ali Smith, for How to Be Both.

The favourite to accept the award from the Duchess of Cornwall at the Guildhall in London is Neel Mukherjee, the Indian-born Briton, for The Lives of Others, his story of family life set in Kolkata, the city of his birth.

William Hill has him at odds of 5/2, followed by Howard Jacobson at 9/2, for J, a story set in the future after an unidentified but momentous catastrophe.

At 72, Jacobson, a winner with The Finkler Question in 2010, would become the oldest ever winner.

Stray tweets from the ceremony, whose coverage by the BBC was hampered by sound problems

'One of the greatest honours in the world of literature' Richard Flanagan on winning #ManBooker2014 pic.twitter.com/EZUjDrub1G

"I'll do what everyone else does with money, live. The prize money means I can continue to be a writer." #2014ManBooker

My review of 2014 #ManBooker winner The Narrow Road to the Deep North by Richard Flanagan via @Telegraph http://t.co/8o3VkfW1OR

We are completely delighted that Richard Flanagan has triumphed at the #ManBooker2014!

That would be artist Geoffrey Dyer, who won the '03 Archibald Prize for the portrait #ManBooker2014 #GeoffDyerMoments http://t.co/7zVYIZHDTr

I bought two autographed copies of Ali Smith's How to be Both as an heirloom. I stand by that decision. #booker