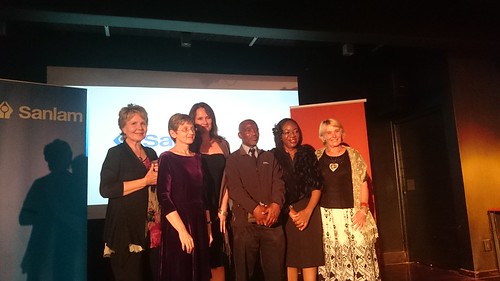 Alert! Tafelberg and Sanlam announced the winners of the 2013 Sanlam Prize for Youth Literature at an event held at the Inner City Ideas Cartel in Cape Town last night.

Hosted by Katlego Maboe, the charismatic Expresso Show presenter, the evening was a true celebration of reading and the importance of books. In her address, NB publishing manager Marga Stoffer stressed this point, quoting from Jane Austen’s Northanger Abbey: “It is only a novel … or, in short, only some work in which the greatest powers of the mind are displayed, in which the most thorough knowledge of human nature, the happiest delineation of its varieties, the liveliest effusions of wit and humour, are conveyed to the world in the best-chosen language”.

Sanlam’s sponsorship manager Frank Louw unfolded the company’s vision of social investment, sharing why they deem it important to invest in reading and education. “This competition is special in many ways,” he said, “but I think the one thing that stands out is that entries are received in all 11 of our official languages. Africa is the most linguistically diverse continent in the world.”

Louw added that despite the facet that most of those languages have less than 10 000 speakers, this literature competition “celebrates and honours our own 11 languages, so we are doing our bit here in South Africa in acknowledging the importance of linguistic abundance”.

Louw went on to explain why Sanlam, a global financial services company, chose to invest in youth literature: “Our association with a sponsorship such as this is not by chance. Ever since our inception as a company we’ve had a purpose of building a better world and enabling people to live their best possible lives.” He expressed Sanlam’s sincere appreciation of the authors and Tafelberg for joining them in encouraging young people to read.

The competition attracted 75 entries in all official languages. Two winners were chosen in each category: English, Afrikaans and African Languages. These authors were notified in February that they would be published in October, but were not told whether they won silver or gold. After the announcement of the respective winners the audience was treated to short trailers of the books, impassioned acceptance speeches and a video of a teenage reader reviewing the book in question.

This prestigious competition, which produces the most esteemed prize for youth literature in South Africa, happens every second year. A call for entries for the 2014/15 prize will be made soon, with the award to be handed over in 2015.

Tsireledzo Mushoma, gold winner in the African language category, said in her acceptance speech: “It gives me motivation to write stories for children in Venda who otherwise might not hear the kind of stories we need to tell them.” Jelleke Wierenga, silver winner in the Afrikaans category, thanked Sanlam and NB for having enough trust in the reading desires of young people to continue with this project (which has been going for over 30 years). She called on those present to encourage a “leeslusrevolusie” and to nurture knowledge hungry teens.

The evening ended on a high note, with some of the authors joining the teens invited to the event in a jolly dance, celebrating these new publications.

“Sanlam is in the business of planning for tomorrow. Through this sponsorship we honour the wordsmiths for their deep commitment to taking their talent and turn that into award winning literature that will be enjoyed by millions of South African young people as part of our investment in their futures,” says Elena Meyer (Senior Sponsorships Manager at Sanlam).

The Sanlam Prize for Youth Literature is awarded every second year, and was launched in 1980. A panel of readers compiled a shortlist of 18 manuscripts which were then judged by representatives from the educational and trade book sector, librarians and academics. Manuscripts are judged anonymously so that debut writers are able to compete against established authors. Past winners of this prize include Darrel Bristow-Bovey, Barrie Hough, Kabelo Duncan Kgatea, EDM Sibiya, Chris Karsten and Marita van der Vyver.

According to Michelle Cooper (publisher of children and young adult fiction at Tafelberg) the Sanlam Prize is vital in finding and developing new talent and to create literature of high quality for readers aged 12 – 18. “Especially in the minority languages a lot has been contributed since entries in all 11 official languages are invited. Over the years around 78 novels that were awarded the Sanlam Prize for Youth Literature have been prescribed as setworks in schools.”

The prize-winning books will be available in bookshops and in e-book format from 1 November.