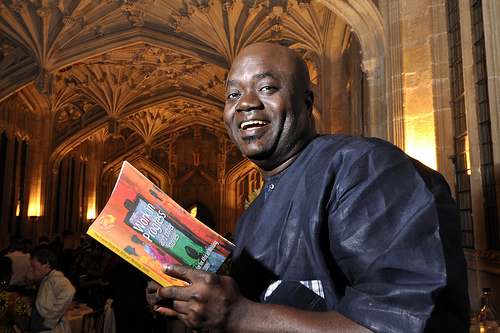 This year, Osundu is the James Breuer Distinguished Author at Syracuse University in the United States. His debut novel, This House is Not for Sale, is out in February in the US and May in the UK. Yiyun Li, author of The Vagrants, says of the book: “The timelessness of this ambitious debut reminds the reader of JM Coetzee’s Life & Times of Michael K.”

Read an excerpt from “Gramophone”:

Whenever the uncle we all called Gramophone, behind his back, walked into any room with a radio on or some music playing, it was immediately turned down or turned off. He would sometimes use two fingers to block both ears when loud music from the record store down the road wafted into the Family House. He was called Gramophone because he would clean and dust every part of the sitting room but would not go near or touch Grandfather’s four-in-one Sanyo stereo. When this was pointed out to him once, he shrank back and said he could dust and clean everything in the sitting room but not that Gramophone, pointing to the Sanyo stereo. We were warned not to whistle songs around him. Whistling was not encouraged in the Family House at any rate; whistling in the daytime was said to attract snakes while whistling at night attracted evil spirits.

He sought refuge in the Family House many years ago, having killed a man, or, as we were told, he had not actually killed the man but the man had died from their encounter and he had had to flee from the village at night. He knew that there was only one place on this earth where no arm no matter how long could reach him, and that was the Family House.