The actress, playwright and poet performed Mhlongo’s story for the second event on the Long Story Short calendar, which took place at the Hammanskraal Community Library recently. “Goliwood Drama” was a finalist in the Twenty in 20 project in 2014.

The Long Story Short initiative is produced by the Pretoria-based art consultancy Kajeno Media under the leadership of Kgauhelo Dube and funded by the Department of Arts and Culture. At the launch of the innovative digital project Hlubi Mboya read “Tender” by author Nozizwe Cynthia Jele.

Watch the video for Kgosidintsi’s spirited performance of “Goliwood Drama”: 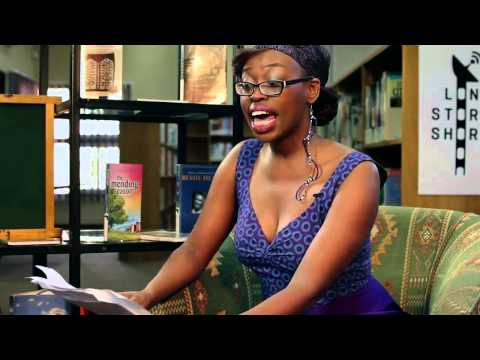 The event is centred around the theme of engendering tolerance through exposure to African literature and will take place on Saturday, 23 May, at the Saulsville Community Library in Atteridgeville.

Dube says of the message of the day: “Through literature we travel to places we would never be able to, so I believe that the more we read about each others’ realities as Africans; we will stop ‘othering’ each other but rather grow in our mutual acceptance as human beings.”

This is the third reading as part of the #longstorySHORT public readings where a capable TV or stage performer reads a short story or novel excerpt to an audience. These recordings are then recorded and packaged into FREE podcasts for consumption at any time.

In reference to the shameful violent attacks against African nationals in South Africa, the usual Q&A after a reading will focus on the potential of stories in prompting forbearance as fellow Africans. Residents of Saulsville and Attredgeville will have the opportunity to share their views of their own personal experiences in relation to Afrophobia and the story that will be read.

“Through literature we travel to places we would never be able to, so I believe that the more we read about each others’ realities as Africans; we will stop ‘othering’ each other but rather grow in our mutual acceptance as human beings,” executive producer Kgauhelo Dube says.

Onuzo’s story “Going Home” will strike a chord as it deals with a UK-based family’s trip to Nigeria. The patriarch of the family is anxious for many reasons: he didn’t marry a Nigerian woman, his children are mixed race and the trip is reawakening many cultural and identity crises within him. Suddenly, he wrestles with where home is.

Ayivor asked to read a West African story, given her ancestry. Her mother is Zambian-South African and father is Ghanaian. She grew up in the Eastern Cape where she was taught to take pride in her Africanness versus nationality.

“#longstorySHORT appealed to me because of its Pan-African focus. Stories speak to these issues of Afrophobia by reminding us that the journey may be different but the core issues are the same. We all want the same things,” she says.