László Krasznahorkai is the winner of the Man Booker International Prize #MBI2015 pic.twitter.com/fotTW1OW0d

Alert! László Krasznahorkai from Hungary has been announced as the winner of the 2015 Man Booker International Prize.

The Man Booker International Prize recognises one writer for his or her achievement in fiction. Worth £60,000 to the winner, the prize highlights one writer’s overall contribution to fiction on the world stage. The prize is awarded every two years to a living author who has published fiction either originally in English or whose work is generally available in translation in the English language.

The 10 finalists, eight of which were present at the announcement, were announced in Cape Town earlier this year by judges Marina Warner (Chair), Nadeem Aslam, Elleke Boehmer, Edwin Frank, and Wen-chin Ouyang. Included on the list, and present at the gala event, was four African nominees: Marlene van Niekerk (South Africa), Alain Mabanckou (Republic of Congo), Mia Couto (Mozambique) and Ibrahim al-Koni (Libya).

'A huge surprise' László Krasznahorkai on his #mbi2015 win pic.twitter.com/51b3xuP6sj

View tweets from the announcement, including the @ManBookerPrize feed and #MBI2015: 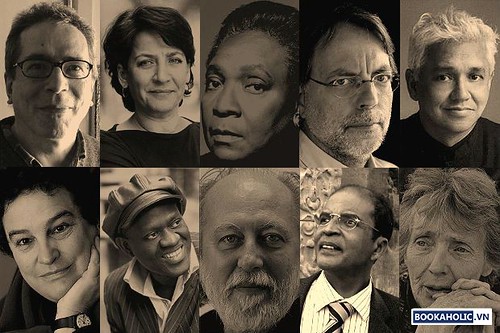 Innovative Hungarian writer László Krasznahorkai is tonight announced as the winner of the sixth Man Booker International Prize at an award ceremony at the Victoria and Albert Museum in London. Krasznahorkai was chosen from a list of ten eminent contenders from around the world.

The Man Booker International Prize, worth £60,000, is awarded for an achievement in fiction on the world stage. It is presented once every two years to a living author for a body of work published either originally in English or available in translation in the English language. It has previously been awarded to Ismail Kadaré in 2005, Chinua Achebe in 2007, Alice Munro in 2009, Philip Roth in 2011, and Lydia Davis in 2013.

Born in 1954, László Krasznahorkai gained considerable recognition in 1985 when he published Satantango, which he later adapted for the cinema in collaboration with the filmmaker Bela Tarr. In 1993, he received the German Bestenliste Prize for the best literary work of the year for The Melancholy of Resistance and has since been honoured with numerous literary prizes, amongst them the highest award of the Hungarian state, the Kossuth Prize.

The judges said of Krasznahorkai’s work:

‘In László Krasznahorkai’s The Melancholy of Resistance, a sinister circus has put a massive taxidermic specimen, a whole whale, Leviathan itself, on display in a country town. Violence soon erupts, and the book as a whole could be described as a vision, satirical and prophetic, of the dark historical province that goes by the name of Western Civilisation. Here, however, as throughout Krasznahorkai’s work, what strikes the reader above all are the extraordinary sentences, sentences of incredible length that go to incredible lengths, their tone switching from solemn to madcap to quizzical to desolate as they go their wayward way; epic sentences that, like a lint roll, pick up all sorts of odd and unexpected things as they accumulate inexorably into paragraphs that are as monumental as they are scabrous and musical.’

‘Laszlo Krasznahorkai is a visionary writer of extraordinary intensity and vocal range who captures the texture of present day existence in scenes that are terrifying, strange, appallingly comic, and often shatteringly beautiful. The Melancholy of Resistance, Satantango and Seiobo There Below are magnificent works of deep imagination and complex passions, in which the human comedy verges painfully onto transcendence. Krasznahorkai, who writes in Hungarian, has been superbly served by his translators, George Szirtes and Ottilie Mulzet.’

‘I would like to congratulate László Krasznahorkai and all the finalists from ten countries around the world. We are very proud to sponsor the Man Booker International Prize, recognising the hard work and creativity of these talented authors and translators. The prize also underscores Man Group’s charitable focus on literacy and education, as well as our commitment to excellence and entrepreneurship. Together with the wider charitable activities of the Booker Prize Foundation, the prize plays a very important role in promoting literary excellence and we are honoured to support that.’

Krasznahorkai has chosen to split the £15,000 translator’s prize between two translators, George Szirtes (who translated Satantango and The Melancholy of Resistance) and Ottilie Mulzet (who translated Seiobo There Below). Szirtes is a Hungarian-born poet who came to the UK as a refugee. He has won a number of prizes for his poetry, including the T S Eliot Prize. He has also translated Sándor Márai amongst others.

Ottilie Mulzet is a Hungarian translator of poetry and prose, as well as a literary critic. She has worked as the English-language editor of the internet journal of the Hungarian Cultural Centre in Prague, and her translations appear regularly at Hungarian Literature Online.

László Krasznahorkai will be interviewed by Marina Warner at the Hay Festival on Sunday 24 May at 7pm.

The Man Booker International Prize is sponsored by Man Group plc, which also sponsors the Man Booker Prize for Fiction. The prize is significantly different from the annual Man Booker Prize in that it highlights one writer’s continued creativity, development and overall contribution to fiction on the world stage. Both prizes strive to recognise and reward the finest modern literature.