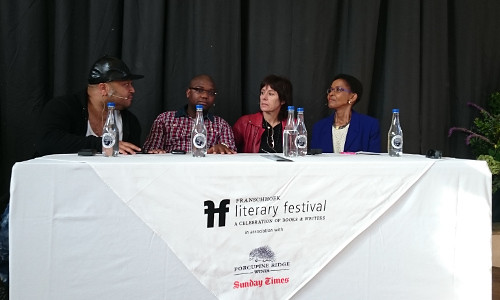 A big debate around the “white literary system” has erupted because of statements made during a session titled “Is Anger Underrated?” at the 2015 Franschhoek Literary Festival.

Chaired by political commentator Eusebius McKaiser, Thando Mgqolozana, Pumla Gobodo-Madikizela and Marianne Thamm were set to consider the role of anger in our social lives and literature. Does anger have moral purpose? Are we an irredeemably angry nation? Or should we just stop being so pissed off all the time?

From the outset, however, the tone of the session was set by Mgqolozana’s anger at literary festivals, and the “white literary system” it represents. This charged the conversation and led to a heated, and now widely discussed, debate.

Read our coverage of the conversation that ensued:

Listen to a podcast of the session and let us know what you think of the debate in the comments below, or on Facebook or Twitter:

Thamm has since written a piece titled “Disturbing the peace” for the Daily Maverick in which she reflects on the subject at hand.

Read her article which concludes with, “The question now is where to from here?”:

It might take place in the bucolic faux colonial wonderland in the Cape winelands but the Franschhoek Literary Festival, while celebrating books and authors, has also become a space to gauge the social and political temperature of the country. This year young South Africans disturbed the genteel peace and made audiences sit up, think, feel and hopefully self-reflect more honestly.

It was, by some accounts, a panel that “seemed to cause the most discomfort” at this year’s festival which took place over a wet and bitingly cold weekend among the vineyards. The discussion contained within the panel’s advertised title, ‘Is Anger Underrated?’, was tenderly and sharply moderated by political commentator, author and equal opportunity provocateur Eusebius McKaiser. My fellow panellists were author Thando Mgqolozana and psychologist and award-winning author Pumla Gobodo Madikizela.

It was also a discussion some opined later “where a lot was said but much more stayed unsaid”.

Correctly predicting what could have been a cool, detached and rational debate about a powerful emotion – “anger” – McKaiser suggested rather that panellists and those in the audience attempt to reflect and connect with anger more viscerally rather than merely reflect on it intellectually.

« Karabo Kgoleng Weighs in on the “White Literary System” Debate: “We are Lazy with Our Analysis of this Issue”
Zandra Bezuidenhout resenseer Narokkong deur Riël Franzsen »