A Tale of Two Podcasts: The “White Literary System” Debate Rages On 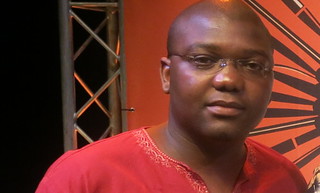 Thando Mgqolozana was up bright and early the other morning to chat to Zamantungwa Khumalo on Power FM about his current crusade to “decolonise the white literary system” in South Africa.

The conversation ranged from what needs to be done to improve South Africa’s literary infrastructure in black communities, to the responsibilities that lie with black authors of the current generation not to allow their material to be compromised on publication.

“A decolonised system would mean that we do not just stuff books into libraries,” Mgqolozana says, “but we bring in literary activities around the year in the black communities, so that the book launches must not just take place in Sandton. They must be in Soweto. The readings, the performances, must be in Soweto.

“On our radio and TV shows there has to be a book show that is done in our mother tongue – this is very important. None of this will make any sense if it is not done in our mother tongue. So a Thando must be able to come to Dobsonville and talk to the people there about literature, about all the phenomena that he is writing about in his mother tongue in a language that will be understood there and be able to engage with those people without losing any depth or value.”

Khumalo and Mgqolozana also discuss – with reference to Toni Morrison, Chinua Achebe and Ngũgĩ wa Thiong’o – the importance of writing in “Englishes” and languages other than English in ways that do not prioritise the “white gaze”.

The consensus they reach, however, is that it is not easy for an author to make that leap. “It’s cold outside white monopoly capital!”, as Khumalo quips.

Meanwhile, John Maytham and Rebecca Davis – who were both guests at the FLF this year – chatted about the debate on CapeTalk.

Here at Books LIVE we are big fans of Davis; she’s one of South Africa’s cleverest – and funniest – essayists, proof of which is abundant in her new book, Best White and Other Anxious Delusions. Perhaps because of the high esteem we hold her in, it was somewhat disappointing to hear Davis refer to Mgqolozana vaguely as “the author who said he was pulling out of the white literary system”, leaving the impression that she didn’t know who he was.

Maytham makes a fair effort at pronouncing the Q-click in Mgqolozana, but seems to give up on the surname after that first syllable, with the end result being closer to “Mgqolwana”. Unfortunately he also refers to Mgqolozana as “Khaya” (perhaps confusing him with Khaya Dlanga?) and isn’t clear on whether Malaika wa Azania and Malaika Mahlatsi are the same person (they are).

Taken individually, these are all forgivable slip-ups. However, in a segment focusing specifically on this debate, perhaps more thorough preparation – or, dare we say it, the inclusion of one of its main black protagonists – would have been advisable.

Anyway, give that a listen here: