Chimamanda Ngozi Adichie on the Elite Cult of Feminism, Being Unpopular, and the Trauma of Her Father’s Kidnapping Chimamanda Ngozi Adichie was in Massachusetts, USA, on Friday to deliver the commencement address to Wellesley College the class of 2015.

Wellesley is an elite private women’s liberal-arts college, and Adichie had some valuable advice for the graduates on feminism, gender, love and changing the world – from her singular perspective.

On makeup, gender injustice and privilege

I wasn’t very interested in makeup until I was in my 20s, which is when I began to wear makeup. Because of a man.

A loud, unpleasant man. He was one of the guests at a friend’s dinner party in Lagos. I was also a guest. I was about 23, but people often told me I looked 12. The conversation at dinner was about traditional Igbo culture, about the custom that allows only men to break the kola nut, and the kola nut is a deeply symbolic part of Igbo cosmology.

I argued that it would be better if that honour were based on achievement rather than gender, and this man looked at me and said, dismissively, “You don’t know what you are talking about, you’re a small girl.”

I wanted him to disagree with the substance of my argument, but by looking at me, young and female, it was easy for him to dismiss what I said. So I decided to try and look older and I thought lipstick might help. And eyeliner.

And I am grateful to that man because I have since come to love makeup, and its wonderful possibilities for temporary transformation.

I’ve not told you this anecdote as a way to illustrate my discovery of gender injustice. If anything, it’s really just an ode to makeup. It’s really just to say that this, your graduation, is a good time to buy some lipsticks – if makeup is your sort of thing – because a good shade of lipstick can always put you in a slightly better mood on dark days.

That story is not about my discovering gender injustice, because of course I had discovered years before then. From childhood. From watching the world.

I already knew that the world does not extend to women the many small courtesies that it extends to men. I also knew that victimhood is not a virtue. That being discriminated against does not make you somehow morally better. I knew that men were not inherently bad or evil, they were merely privileged. And I knew that privilege blinds because it is the nature of privilege to blind.

I knew from this personal experience, from the class privilege I had of growing up in an educated family; that it sometimes blinded me, that I was not always as alert to the nuances of people who were different from me.

And you, because you now have your beautiful Wellesley degree, have become privileged. No matter what your background. That degree, and the experience of being here, is a privilege. Don’t let it blind you too often. Sometimes you will need to push it aside in order to see clearly.

My mother is 73 and she recently retired as the first female registrar of the University of Nigeria, which was quite a big deal at the time.

My mother likes to tell a story of the first university meeting she chaired. It was a large conference room and at the head of the table was a sign that said “chairman”. My mother was about to get seated there when a clerk came over and made to remove the sign. All the past meetings had of course been chaired by men, and somebody had forgotten to replace the “chairman” with a new sign that said “chairperson”. The clerk apologised and told my mother that he would find the new sign, since she was not a chairman. My mother said “no”. “Actually,” she said, she “was a chairman”. She wanted the sign left exactly where it was. The meeting was about to begin. She didn’t want anybody to think that what she was doing in that meeting, at that time, on that day, was in any way different from what a chairman would have done.

Now, I always liked this story, and I admired what I thought of as my mother’s fiercely feminist choice. I once told this story to a friend, a card-carrying feminist, and I expected her to say “bravo” to my mother. But she was troubled by it. “Why would your mother want to be called a ‘chairman’, as though she needed the ‘man’ part to validate her?”, my friend asked.

In some ways I saw my friend’s point.

Because if there were a standard handbook published annually, by the Secret Society of Certified Feminists, then that handbook would certainly say that a woman should not be called, nor want to be called, a chairman.

But gender is always about context and circumstance. And if there is a lesson in this anecdote, apart from just telling you a story about my mother, to make her happy that I spoke about her at Wellesley, then it is this: Your standardised ideologies will not always fit your life. Because life is messy.

We can not always bend the world into the shapes we want but we can try, we can make a concerted and real and true effort.

And you are privileged that, because of your education here, you have already been given many of the tools that you will need to try. Always just try. Because you never know.

And so as you graduate, as you deal with your excitement and your doubts today, I urge you to try and create the world you want to live in. Minister to the world in a way that can change it. Minister radically in a real, active, practical, get-your-hands-dirty way. Wellesley will open doors for you. Walk through those doors and make your strides long and firm and sure.

Write television shows in which female strength is not depicted as remarkable but merely normal. Teach your students to see that vulnerability is a human rather than a female trait. Commission magazine articles that teach men “how to keep a woman happy”. Because there are already too many articles that tell women how to keep a man happy. And in media interviews make sure fathers are asked how they balance family and work. In this age of parenting as guilt, please spread the guilt equally. Make fathers feel as bad as mothers. Make fathers share in the glory of guilt.

Campaign and agitate for paid paternity leave everywhere in America. Hire more women where there are few. But remember that a woman you hire doesn’t have to be exceptionally good. Like a majority of the men who get hired, she just needs to be good enough.

On the elite cult of feminism

I began to really ask myself what it means to wear this feminist label so publicly. Just as I asked myself, after excerpts of my feminist speech were used in a song by a talented musician whom I think some of you might know, I thought it was a very good thing that the word “feminist” would be introduced to a new generation. But I was startled by how many people – many of whom were academics – saw something troubling, even menacing, in this.

It was as though feminism was supposed to be an elite little cult, with esoteric rights of membership. But it shouldn’t.

On what she learned from her father’s kidnapping

The past three weeks have been the most emotionally difficult of my life. My father is 83 years old. He’s a retired professor of statistics, a lovely kind, simple man, who is full of grace. I am an absolute daddy’s girl.

Three weeks ago my father was kidnapped near his home in Nigeria, and for a number of days my family and I went through the kind of emotional pain that I have never known in my life.

We were talking to threatening strangers on the phone, begging and negotiating for my father’s safety, and we were not always sure if my father was alive. He was released after we paid a ransom.

He is well, he’s in fairly good shape, and in his usual lovely way, he’s very keen to reassure us that he’s fine. I’m still not sleeping well. I still wake up many times at night in panic, worried that something else has gone wrong. I still cannot look at my father without fighting tears. Without feeling this profound relief and gratitude that he’s safe. But also rage, that he had to undergo such an indignity to his body and to his spirit. And the experience has made me rethink many things. What truly matters and what doesn’t. What I value, and what I don’t.

On being raised as a woman, to be likeable, and online shopping

All over the world, girls are raised to be make themselves likeable, to twist themselves into shapes that suit other people.

I am lucky that my writing has given me a platform that I choose to use to talk about things I care about, and I have said a few things that have not been so popular with a number of people. I have been told to shut up about certain things, such as my position on the equal rights of gay people on the continent of Africa, such as my deeply held belief that men and women are completely equal.

I don’t mean to sound precious but please don’t waste your time on earth.

But there is one exception. The only acceptable way of wasting your time on earth is online shopping.

On “because you are a woman”

My mother and I do not agree on many things regarding gender.

There are certain things my mother believes a person should do, for the simple reason that said person “is a woman”.

Such as, nod occasionally and smile even when smiling is the last thing one wants to do. Such as, strategically give in to certain arguments, especially when arguing with a non-female. Such as, get married and have children. Now, I can think of fairly good reasons for doing any of these, but “because you are a woman” is not one of them. And so, class of 2015, never, ever accept “because you are a woman” as a reason for doing – or not doing – anything.

I would like to end with a final note on the most important thing in the world: love.

Girls are often raised to see love as only giving. Women are praised for their love when that love is an act of giving. But to love is to give and to take. Please love by giving and by taking. Give and be given.

If you are only giving and not taking, you’ll know. You’ll know from that small and true voice inside you that we females are so often socialised to silence. Don’t silence that voice. Dare to take. 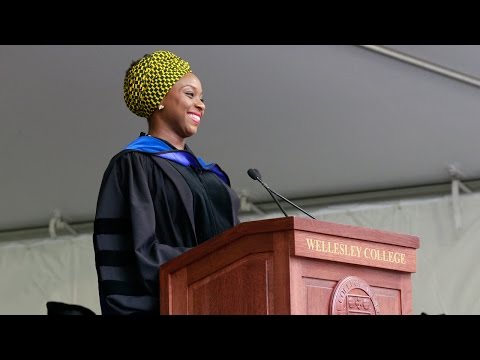