“It is Nonsensical to say Black People Don’t Read” – Highlights from the #LitApartheid Debate (Plus: Podcast)

McKaiser made some introductory remarks, before each panelist spoke their piece, followed by questions and comments, and closing remarks.

We’ve transcribed some soundbites below, but to get the full feel of the debate, listen to the podcast here:

.@Eusebius refers to the 'awkward' Media24 Awards pic that circulated over & how white writers are unaware of their privilege #LitApartheid

“White, unearned privilege extends to every part of society, and I’m afraid South African literature and the literary landscape are no exception.

“There are many white writers, festival organisers, book editors and reviewers, awards committees – not least the Media24 one, after that awkward picture over the weekend of about seven or eight white people winning awards – who are highly unaware of the unearned privileges that come with writing if you are white in South Africa.

“You have a ready audience – a small one, to be fair, in total, regardless of whether you’re black or white – for your work.

“And sometimes book festival organisers respond too quickly and too anxiously – what on earth was Kenny Kunene doing at the Franschhoek Literary Festival? It was a gimmick. It screamed white liberal angst about how to attract black audiences. All that happened in the end is that the event sold out very quickly because white middle class South Africans were anxious to know from him whether Julius Malema will come after their bottles of Chardonnay. That’s not the way to deal with deconstructing the literary landscape.

“You need to engage your audiences critically.

“It’s interesting which books are punted by book editors, by publications. In non-fiction it’s always works that either tell white readers that the country is on the brink of rescue or collapse – like The Fall of the ANC, I love the dudes who wrote it but it wasn’t particularly great. Of course it sold millions. Because the prospect of the fall of the ANC is music to the ears of people who don’t want to leave for Perth.

“When you do find works that are genuinely brilliant and deserving of a Sunday Times Literary Award, it will be a book like Askari, or like Redi Tlhabi’s, both of those books are excellent, as well as Pumla Gobodo-Madikizela’s A Human Being Died that Night. They’re excellent. But of course they also had something in common: they are books that tell white people what black people are like. Or, in Pumla’s case, oh my God! A black woman is humanising a white monster. The chances of an Andile Mngxitama book telling white people about their unearned privileges bluntly ever getting that kind of exposition, let along getting onto a shortlist, is almost none, because that kind of messaging is not loved.

“We need to stop thinking that there’s some sort of objective process by which we decide which books we punt, which authors we punt, and that there’s something self-explanatory about a book like Endings and Beginnings selling 10 or 20 thousand copies. No it’s not. Just like Native Nostalgia by Jacob Dlamini, it stops a white person from actually having to bother going into a township.

“If you had to get a book that says racism is alive and well, it will be quietly ignored. That is something that white liberals have to confront themselves with. A failure to do so puts you on a continuum with Steve Hofmeyr.” 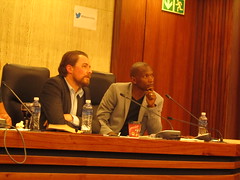 “In 1976 the worm turned on apartheid. In 2015 I feel like the worm may have started to turn on the white literary system.

“At the Franschhoek Literary Festival, Thando said he’s angry: ‘I’m angry at the people and our friends who think this situation is okay.’ Thando, I’m one of those friends, and I apologise. I don’t know if you’ve had an apology yet, but I apologise.

“In Askari, Jacob Dlamini poses the question of whether we should broaden or widen the definition of the word askari. And I think we have to ask the question, just as apartheid was supported by collaborators, black and white, might we argue that the white literary system is sustained by literary askaris.”

Williams tweeted some follow-up points on that this morning:

“In trade publishing, in terms of the formal economy, you’ve got one million people spending R2 billion.

“The only black writer on the list right now, of the top 88 books in the country, is Khaya Dlanga’s To Quote Myself. He is number 87 out of 88.

“And the last thing that sells is Christian titles.

“Here’s what doesn’t sell: local English fiction. Publishers publish it at a loss because they believe in the work. And poetry, and you won’t find many publishers of poetry in this country as a result.

“So almost all publishers have to bring in big international bestsellers. But it remains a fundamentally untransformed industry.

“I think, and I stand to be corrected by any publishers in this room, that apart from Jacana Media there are no formal trade publishers with black editors in the country.

“There’s not a lot of wiggle room for people inside the white literary system to crack the problem, and it’s not going to happen unless it’s forced.

“But there are one or two black writers who have hacked the system. Gayton McKenzie’s A Hustler’s Bible, which he produced and sold outside of the white literary system. And DJ Sbu’s Leadership 2020. They figured out that you can strategically publish something, and make money.”

“If you want to understand the disparity that exists in the publishing sector or the book sector, you should visit Books LIVE today. There’s a picture of the Media24 Literary Awards, which is all white, and the latest post is of the Indigenous Languages Publishing Programme Awards, which is all black. So that says something about our industry.

“I must say, I was quite challenged when Thando decided to accept the invite to Franschhoek, because personally I thought he shouldn’t. It sounded more like accepting a dinner invite, and then once you’re at the table you’re telling the host what to cook.

“However, this moral reasoning of mine, versus his consternation – I think he came out tops. Because him being there gave him a platform to raise the issues that he raised, and that’s why we are here today.

“But I do not believe that white extremism can be counteracted with black extremism.

“We all know by now that the Franschhoek Literary Festival is the embodiment of all that is wrong with this white literary system we are talking about. And my decision, back in 2011, was to remove myself from that; not to be part of it.

“Much as I took that decision, I do not stand for a total boycott of any festival. I do not hold views as held by Andile Mngxitama, who is calling for a blacks-only festival. To do that is to emulate the very people you are criticising. But my rejection of the white literary system does not mean I will embrace black mediocrity.

“Franschhoek is the embodiment of all that is white. It is a private initiative. They created that festival for themselves. And after they created it, they thought, ‘Ha, so we will also need maybe some black monkeys to come and entertain us’. And then they extend invites to us. So it was on those grounds that I declined the invite in 2011. But the circus will not stop because of the absence of one monkey.”

“I think the debate should be welcomed and is necessary to encourage and to stimulate. It allows us to think anew about the role of culture. I think this is a necessary phase of transformation that some of us might have thought was over.

“This debate is emphasising that everybody feels uncomfortable. Blacks are uncomfortable because they have political power but not economic power and cultural power. Whites might still dominate cultural expression, but there is a discomfort of what this could mean in a world where the majority really rules.

“I believe that white people need reminding of the easy trap of complacency and thinking that everything is alright, that everyone is settled in post-apartheid comfort. Everything is not alright, as Thando says. The society is still in the making.

“But I also think Thando’s decision to opt out of South African literary festivals and his lashing out at the so-called white literary system is racialising the debate and polarising people in ways that they never were before. It’s a pernicious kind of racism. It’s a blame culture which shifts responsibility and shouting that detracts from the real issues in South Africa, namely that our education system is failing both black and white learners.

“It also detracts from questions such as: ‘Are black parents buying books for their children?’”

.@thando_mgqo: An omelette cannot be unscrambled. Decolonialism is about imagining something new. #LitApartheid

“This is why Rhodes must fall.

“We need an alternative to the existing literary system. And I believe the system will be changed by readers, and in South Africa that’s black readers and black book buyers.

“There’s a distinction between black people who buy books and those who read them. Black households have the phenomenon of the travelling book. A book will be read until it has lost all its pages. Which is why it is nonsensical to say black people don’t read.

“The readers are missing because they do not have access to literature.

“Thando jumping out of the colonial literary festival, Rhodes Must Fall, Open Stellenbosch, Transform Wits are not coincidences. They are indicators that black people have come to the realisation that we have been through a false transformation process and we have to do something about it – starting now.

“I feel horrible that for the last seven years or so I have been begging to be integrated into this system in a more comfortable way. What the fuck was that about? I’m horrified!”