Lesego Rampolokeng to Launch a New Poetry Collection, A Half Century Thing, as He Turns 50

Please note: This event time has changed, and now starts at 2 PM 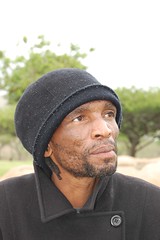 Lesego Rampolokeng will be launching his eighth collection of poetry, A Half Century Thing, on Saturday, 1 August, as he celebrates his 50th birthday.

The publication comes 25 years after his debut, Horns for Hondo. His most recent collection is Head on Fire: Rants / Notes / Poems 2001-2011.

Rampolokeng is one of South Africa’s most outspoken literary voices, and is frequently compared to Fanon and Steve Biko. This is a literary event not to be missed.

The launch will be at 7 PM at 8365 Twala Street in Orlando West.

A scholarly treatise for readers who never cared about scholarship, a memoir for those who have had enough of insular confession, and a poetry book for the hip-hop generation, A Half Century Thing synthesises the raw passion of a diary with the relevance and scope of nothing less than the history of South African literature, art and music.

In the spirit of Johnny Dyani’s Black Family Music, and similarly without compromise, Lesego Rampolokeng tangles and untangles a transgressive lineage that links Mongezi Feza to Miles Davis, via Dumile Feni, Sony Labou Tansi, Winston Mankunku Ngozi, Steve Biko, Amiri Baraka, Linton Kwesi Johnson, Franz Fanon and more. All the while chronicling his disillusionment with the current dispensation and simultaneously trying to dig himself out of his own alienated funk.

What emerges is devoted heresy, a sermon on the word, on politics and aesthetics that challenges what poetry does, what it can do, even what it is willing to address as a form.

Born in Orlando West, Soweto, in Johannesburg, Lesego Rampolokeng is a poet, novelist and playwright, who rose to prominence in the 1980s, a turbulent period in South Africa’s history.

Coming a quarter of a century after his debut Horns for Hondo (1990), and on the occasion of the poet’s 50 birthday, A Half Century Thing is his eighth collection of poetry. He is also the author of two novels and two plays and has written screenplays and released two audio recordings, including a collaboration with the Kalahari Surfers.

His documentary film Word Down the Line debuted in 2014.

“Lesego Rampolokeng is to literature and theatre what Fanon and Biko are to sociopolitical analysis and activism.” – Mphutlane Wa Bofelo

“The dark Kafkaesque humour of Lesego Rampolokeng is an arrow shot into the heart of the complacent.” – Paul Wessels, Cape Times

« 67 Poems for Freedom: Commemorate Nelson Mandela Day with Mongane Wally Serote and Other Poets at Freedom Park
8 Things to Expect from Go Set A Watchman – Based on Early Reviews »