The diversity of opinions present on stage at the Open Book Festival during the conversation on race illustrated the complexity of this important issue.

As the audience began to leave at the end of the event, the panel continued the discussion – on their feet. A recording is available to listen to below.

This photo sums up the @OpenBookFest race conversation #OBF2015 pic.twitter.com/AerlllEY0r 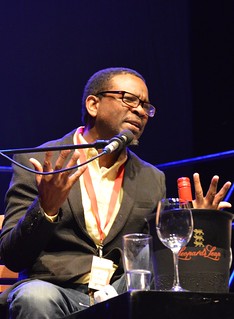 Xolela Mangcu, editor of the new Wits Press book The Colour of Our Future, was joined by contributors Hlonipa Mokoena and Crain Soudien in a session chaired by Ashraf Jamal – who kicked off the fiery debate by saying he is “bored of this depressing topic”.

Mangcu disagreed: “First of all I have to liberate myself from his frame. His frame is not my frame. I don’t find race depressing. I don’t find it to be something that we should not be talking about, at all. The whole idea is that we have different ways of thinking of these things, and that was the idea behind the book: to find contrasting perceptions of race.”

Referring to Steve Biko’s interpretation of race, Mangcu stated: “We as South Africans can create a society in which we do not have to deny race, where it is not a biological concern, but as he [Steve Biko] defined it – race as a political concept, and as a cultural concept.”

He summarised his views on race, largely relying on Biko’s construction of what it means to be black, and stated that modern movements like Rhodes Must Fall “are talking about race in a way that Steve Biko would never recognise”.

He went on to say: “They are talking about blackness as gendered, as queer. For me that is what a political understanding of race is: That it is always contextual, always responding to the moment, but it’s never biological. And the idea that it is biological is a straw argument that people bring up.”

At this point Soudien, who contributed the essay titled “Interogating transformation in South African higher education” to The Colour of Our Future, was integrated into the conversation.

“Let me say quite emphatically … that non-racialism is not dead. It’s really important to be clear about what non-racialism is. We come to think that non-racialism started in 1956, when the ANC adopted the freedom charter, but it’s actually older,” Soudien explained. He went on to say that the way in which the concept of race was constructed as early as the 17th century is so toxic that we, as a society, will never be able to recover from it. The idea that what you look like has a deep signification of what you are is so absurd, yet it is impossible to get away from, the academic explained.

Soudien made a call for the celebration of differences, for people to see that “the fact that I look different to you is a great thing”. However, he believes that we should stop turning race into a value, “which comes to count in the economy of culture”. He rejects the notion that looks, and most importantly skin colour, should dictate identity – much to Manqcu’s chagrin.

Mokoena offered a very different view at this point, describing the way we see race as a phantom limb which does not exist. She explained this concept, which she discusses at length in her contribution to Mangcu’s book on race:

“Race in South Africa is our phantom limb. We are aching for it precisely because it’s just not there. We look down, and we cannot see race but we ache for it. It’s a kind of internalised aching for the presence of race in our lives, in our workplace, in the way that we talk about each other.”

Mokoena believes that race and conversations about it are only important to academics and have become an intellectual debate rather than a lived experience. Mokeona went on to say: “Ordinary people, throughout the century, have always disregarded race. Ordinary people have got many more problems that do not obey racial identities.”

Unsurprisingly this controversial, albeit fresh, take on race in a country as racialised as ours did not sit well with everyone. What followed on from the introductions to the three contrasting views on race in a post-apartheid South Africa was a fascinating, passionate debate that ultimately deserved more than just the one hour allocated to it.

For a better understanding of what the three academics were trying to get across, and more of Jamal’s contribution, listen to a recording of the conversation:

Helené Prinsloo brought the conversation to us live from The Fugard Theatre, using the hashtag #OBF2015:

Colour of Our Future

The Colour of Our Future: Does race matter in post-apartheid South Africa? – edited by Mangcu with contributions by the likes of Soudien, Mokoena, Joel Netshitenzhe, Lawrence Blum, Mark Swilling, Nina G Jablonski, Steven Friedman, Suren Pillay, and Vusi Gumede – aims to shed light on the complexity of our racial identities and the overarching things that influence it.