Gestation of an Unloved Woman: Jennifer Malec Talks to Petina Gappah About Her Novel The Book of Memory

By Jennifer Malec for the Sunday Times 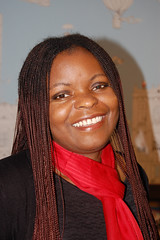 What happens when your book is sold before it is finished, and you then begin to detest your main character? In the case of Zimbabwean author Petina Gappah, you fight your way through it for six years, and emerge with a novel that reveals nothing of the struggle.

The Book of Memory is the story of an albino woman on death row for the murder of the white man to whom her parents sold her as a child. But Memory’s memory is unreliable, and certain revelations rock the end of the book so fundamentally that it feels tempting to begin it again from page one.

This is Gappah’s debut novel, although she won the Guardian First Book Award for her collection of short stories, An Elegy for an Easterly, in 2009. She has law degrees from three different universities – including Cambridge – and currently lives in Geneva, where she works in international trade law. Gappah is the first born of five children, and says she is a very “driven and focused person, simply because of my position in the family”.

She nevertheless experienced such debilitating “imposter syndrome” after the success of her first book that the second went through 37 drafts. “I was terrified that people would find me out and realise that I had conned them into thinking I was a good writer,” she says.

“I’m gratified and surprised that this book seems to be getting fairly good reviews – although I’m not reading them. It feels very strange to have something that is out there in the world, that I created but now exists independently of me. I’m not quite sure what my relationship with that thing is, but other people seem to like it.”

Another reason for her slow progress on the novel was the fact that she could not stand her main character, Memory. “After a while I realised I didn’t really like her, and I didn’t believe she had anything interesting to say,” she says. “So I stopped writing the book for about two years.” Gappah realised that it was only after she began to focus on the affinities she shared with Memory that the character came alive for her again.

“I didn’t want to write an autobiographical novel,” she says. “I don’t write anything that’s about me in any way, but I thought maybe I could tap into some of my own vulnerability, some of my own sense of loneliness and isolation.”

With The Book of Memory, Gappah says she wanted to rediscover the “magic of reading” that we tend to lose as we get older: “I wanted to write the kind of book that gripped you as a child.”

Despite being undeniably literary, the book manages to approach the compulsiveness a particular type of child finds in Enid Blyton or Harry Potter – which Gappah says made her weep just a few years ago. It swoops effortlessly between the present day in Chikurubi Maximum Security Prison, Memory’s childhood on the noisy streets of Mufakose Township and her teenage years in Summer Madness, the mansion where she lives with the man she believes bought her. Gappah has a finely tuned ear for dialogue – hearing her read is a delight – and the disarming ability to shift the emotional response to a character from hatred to pity in just a few pages. It is a powerful novel, an achievement made all the more extraordinary by Gappah’s assertion that she cannot remember “what’s there and what’s not”.

So are there any parts of the novel that are the same as they were in draft one? “No. Memory was a completely different person. I wanted to write ‘Notes on a Scandal in a Zimbabwean Prison’. I wanted to write an untrustworthy, unlikeable character, that you somehow end up feeling some sort of compassion for. But maybe I don’t have the skills as a writer to write that kind of character yet. My next challenge is to create a character who is good through and through.”