Thomas Piketty Visit to SA Back on Schedule, After Passport Hold-up, Technical Gremlins and Rhodes Must Fall Intervention Thomas Piketty, the “rockstar” French economist whose Capital in the Twenty First Century became a global bestseller last year, despite being very difficult and 700 pages long, apparently got on an aeroplane this morning and is on his way to Johannesburg.

Exciting! Thomas Piketty is on the plane and on his way to Joburg to speak at @WitsUniversity this afternoon.

Piketty may seem an odd choice to deliver the Nelson Mandela Annual Lecture, which is what he will be doing at the University of Johannesburg on Saturday, but his Capital in the Twenty First Century is at heart an in-depth analysis of inequality, and the first chapter begins with a reference to the Marikana massacre:

On August 16, 2012, the South African police intervened in a labour conflict between workers at the Marikana platinum mine near Johannesburg and the mine’s owners: the stockholders of Lonmin, Inc., based in London. Police fired on the strikers with live ammunition. Thirty-four miners were killed. As often in such strikers, the conflict primarily concerned wages: the miners had asked for doubling of their wage from 500 to 1,000 euros a month. After the tragic loss of life, the company finally proposed a monthly wage of 75 euros.

This episode reminds us, if we need reminding, that the question of what share of output should go to wages and what share to profits – in other words, how should the income from production be divided between labour and capital? – has always been at the heart of distributional conflict.

Piketty had to give his lecture titled “Income, Wealth and Persistent Inequality” at the University of Cape Town last night via livestream from Paris, after he was prevented from travelling to South Africa because of too few blank pages in his passport. But gremlins sabotaged the digital attempt, and the event was then interrupted when Rhodes Must Fall movement staged an intervention.

While technicians attended to the technical problems, Trevor Manuel, former minister of finance, introduced Piketty and his ideas. Cutting him short and joining him on stage was a group of Rhodes Must Fall activists who entered Jameson Hall, for a second time, singing and carrying white crosses.

Vice-rector Max Price allowed them three minutes to deliver a speech after which Manuel then introduced three academics who each spoke briefly about their thoughts on Piketty’s work.

Shortly thereafter, he announced that the technical problems were not solved.

Rhodes Must Fall released a statement on their Facebook page shortly afterwards:

This evening UCT displayed its hypocrisy by hosting French economist, Thomas Piketty, in Jameson Hall. Piketty is best known for his research on the detrimental impact of inequality. UCT is well-known for positioning itself as an outspoken, progressive institution on national and global issues, while failing to take meaningful action on the oppression it reproduces on its own campus. And so, once again, UCT hosts a widely acclaimed academic who argues against systematic injustices, even as UCT outsources workers, pays them poverty wages, and grants its top management grotesquely high salaries.

The exploitation and oppression of workers at UCT must immediately be ended. Workers must be directly employed by UCT, and must be paid a dignified living wage.

One particular example of the efforts towards dignified work is the victimisation of workers that occurs on this campus – of which UCT is aware but chooses to turn a blind eye, denying responsibility.

This is especially true of cafeteria workers, who face some of the most severe exploitation at UCT (see LSF’s earlier post on the details of this. Fuller details also available through LSF). Attempts by workers to improve their conditions has been met with threats, intimidation and victimisation from the cafeteria management.

We call on all students and staff to boycott the following Big Chef cafeteria food stalls from Thursday the 1st of October until UCT management and the management of these food stalls guarantee no worker will face any form of victimisation:
- Cafe Quencha and Java Junction in Leslie Social
- Frigo in the Students’ Union and at Graca Machel
- The Glasshouse in Menzies
- The Mootroom in the Neville Alexander Building
- The Purple Haze in Centlivres
- Crunch and Java Junction in the Barnard Fuller Centre (Health Sciences)
- Ideas Cafe in the Wolfson Pavilion (Health Sciences).

In an email to the LSF, the management of these cafeteria food stalls explicitly threatened to victimize workers who try and improve their conditions, saying,

“…any attempt by an employee to work against the interests of the employer by campaigning to negatively affect the reputation and revenue of the business is in breach of that duty. In fact such behaviour actually constitutes gross misconduct that would generally warrant dismissal.” (Full email available through LSF)

We thus call on the management of these food stalls to give a written guarantee that no cafeteria worker of their food stalls will face any threats, accusations, intimidation, wage reductions, or dismissal for any involvement in worker organising; and we call on UCT management to commit itself to monitor all disciplinary actions at these food stalls to ensure that no worker is facing victimisation.

To ensure that this issue is taken seriously by the food stalls’ and UCT’s management, we call on all students and staff to meet us at 12:45 on Jammie Plaza this Thursday 1st of October, from where we will disperse to the various food stalls and hold a protest outside each stall between 1 – 2, showing our solidarity and commitment with the struggles of cafeteria workers, and all outsourced workers at UCT, as well as making the customers of each stall aware of the struggles the workers face.

These demonstrations outside each stall will continue every meridian up until the 6th of October.

It is important to recognise that the person on each side of the till is determined by centuries of racial, class and gender oppression. As such, the struggle of the workers must be at the forefront of the struggle for decolonization at UCT.

Transformation is hollow when workers are excluded!

True decolonization must ensure the end to outsourcing and victimization, and the implementation of a basic living wage!

I'll be honest, UCT #Piketty event turning into a nightmare. Can't get him on video link, now #RhodesMustFall has taken over stage.

Does #rhodesmustfall disrupters of Piketty video link at UCT even know what his theories are & what he said about #Marikana?

Why I am here for @RhodesMustFall… Link to the quoted article here>>> http://t.co/928CsL0fq9 #Piketty #PikettyInSA pic.twitter.com/fo8snqrjBy

Maybe discomfort could have been spared if a talk focusing on inequality would have afforded a voice to those fighting it? #RhodesMustFall

Students disrupt a discussion on the causes of inequality at UCT. How will ungovernability resolve inequality? pic.twitter.com/TLNv3u4krv

A conversation that excluded the complainants reinforced the very arrogance of power that birthed #rhodesmustfall https://t.co/izFkYviLYV

Writing for GroundUp, Ben Stanwix points out that Piketty himself would probably have supported the intervention:

This was a welcome intrusion into an official event characterised by one unfortunate set of makeshift proceedings after the next, and would perhaps have been saluted by Piketty based on what he writes. Anyone who has read at least the first chapter of the book will know that although Wednesday’s lecture would have been his first time reflecting at length on South Africa, he is not a complete stranger to the current state of affairs here. His book begins with a description of the Marikana Massacre, where 34 mineworkers were shot and killed by police at the Lonmin platinum mine in Marikana, on 16 August 2012. He references the massacre because it highlights the worst outcome of extreme inequality taking place in the most consistently unequal country in the world.

Piketty is due to give a talk entitled “Inequality in South Africa: What is to be Done?” at Wits University today at 4.30 PM – and the WiSER website indicates this event is still on.

Follow the link to the live stream of Thomas Piketty's lecture today at @WitsUniversity at 4.30pm: http://t.co/lebMeemuZW

He will then appear at the University of Johannesburg on 2 October, before delivering the 13th Nelson Mandela Annual Lecture on 3 October, also at UJ.

Watch a video of Piketty talking about his latest book: 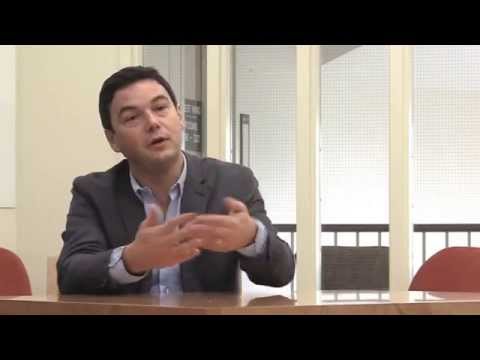 Read the Introduction to Capital in the Twenty-First Century:

From the Introduction to Capital in the Twenty-First Century, by Thomas Piketty

“Social distinctions can be based only on common utility.” - Declaration of the Rights of Man and the Citizen, article 1, 1789

The distribution of wealth is one of today’s most widely discussed and controversial issues. But what do we really know about its evolution over the long term? Do the dynamics of private capital accumulation inevitably lead to the concentration of wealth in ever fewer hands, as Karl Marx believed in the nineteenth century? Or do the balancing forces of growth, competition, and technological progress lead in later stages of development to reduced inequality and greater harmony among the classes, as Simon Kuznets thought in the twentieth century? What do we really know about how wealth and income have evolved since the eighteenth century, and what lessons can we derive from that knowledge for the century now under way?

These are the questions I attempt to answer in this book. Let me say at once that the answers contained herein are imperfect and incomplete. But they are based on much more extensive historical and comparative data than were available to previous researchers, data covering three centuries and more than twenty countries, as well as on a new theoretical framework that affords a deeper understanding of the underlying mechanisms. Modern economic growth and the diffusion of knowledge have made it possible to avoid the Marxist apocalypse but have not modified the deep structures of capital and inequality—or in any case not as much as one might have imagined in the optimistic decades following World War II. When the rate of return on capital exceeds the rate of growth of output and income, as it did in the nineteenth century and seems quite likely to do again in the twenty-first, capitalism automatically generates arbitrary and unsustainable inequalities that radically undermine the meritocratic values on which democratic societies are based. There are nevertheless ways democracy can regain control over capitalism and ensure that the general interest takes precedence over private interests, while preserving economic openness and avoiding protectionist and nationalist reactions. The policy recommendations I propose later in the book tend in this direction. They are based on lessons derived from historical experience, of which what follows is essentially a narrative.

Image courtesy of The Monthly