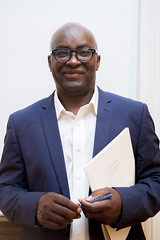 The prize is awarded by the Association of German Publishers and Booksellers (Bavaria) and the City of Munich, and honours a book which “testifies to intellectual independence and promotes civil liberties, moral, intellectual and aesthetic courage and to give impetus to the present awareness of responsibility”. The prize comes with an endowment of 10 000 Euros (roughly R150 000).

The award ceremony will take place on November 30, 2015, at the University of Munich.

Mbembe is a philosopher, political scientist, and public intellectual based at WiSER (Wits Institute of Social and Economic Research) in Johannesburg.

“The award is a tribute to the work we do at WiSER and at the University of the Witwatersrand. Critique de la raison negre could not have been written anywhere else in the world,” Mbembe told WiSER. “I want it to be read as a South African book. I owe a huge debt of gratitude to South Africa, and just as many other descendants of Africa in the world, I entertain huge hopes for this country.”

The prize jury called Kritik der schwarzen Vernunft a “powerfully written book” and a “remeasurement of the history of capitalism and globalisation” that, with its proposition that global society not only moves goods and capital but also humans and labour, “comes at exactly the right time”.

Critique de la raison negre was published in German by Suhrkamp Verlag AG. An English translation of the book is in the works.

« Don’t Miss Bloody Parchment, a Horrorfest Literary Event with SA Partidge and Other Authors, at the Labia Cinema
Don’t Miss My World of Tomorrow, with Arthur Goldstuck, Emma Sadleir, Dion Chang and Many More in Sandton »