The Beckett of the Boland, the Kafka of the Karoo, the Faulkner of the Veld: JM Coetzee Receives Honorary Doctorate from SOAS, London

Earlier this year, on 24 July, the School of Oriental and African Studies (SOAS) at the University of London bestowed an Honorary Doctorate in Literature upon Nobel Laureate JM Coetzee, in recognition of his contribution to global literature.

SOAS recently released a video of the ceremony, allowing a rare glimpse of the author, who is not fond of the public eye.

At the graduation ceremony Kai Easton, senior lecturer in English at SOAS, paid tribute to Coetzee, remembering in agreement when South African press called him “the Beckett of the Boland, the Kafka of the Karoo, the Faulkner of the veld” some 20 years ago. However, she takes the comparison even further and equates him to Bach and Roger Federer.

Watch the video or read Easton’s commendation below to understand why she says so: 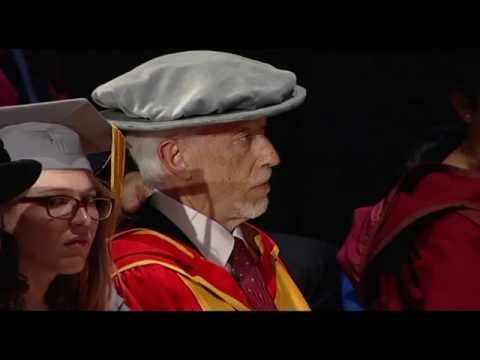 From 1962 to 1965 John Maxwell Coetzee lived in England, first in this great metropolis and later out in Surrey. Having just completed his undergraduate honours degrees in English and Mathematics at the University of Cape Town, he set sail for Southampton – his first trip overseas. He was 21 years old, an aspiring poet, and London, he told himself, was the city from which he must learn to write. His plan was to get a respectable job by day, and write in the free hours. He soon found work as a computer programmer, a programmer of course in the earliest days of computers, near Oxford Street.

In the evenings and on Saturdays, he also researched and wrote an MA thesis on the novels of Ford Maddox Ford. He knew this Bloomsbury neighbourhood, and he must have walked by SOAS many times on his way to what was then Dillon’s Bookstore on Malet and Gower Streets. He would also have known that he was walking past one of the great publishing houses of the 20th century, Faber & Faber, a building now integral to the SOAS campus and adorned with a commemorative plaque in honour of its most famous editorial director, the poet and one of his earliest literary mentors, TS Eliot.

All of this is a prelude to the story of the writer that we are honouring today, who began making notes for what became his first novel, Dusklands, in the reading room of the British Museum just a stone’s throw from here.

It’s now 50 years since John Coetzee left this island’s shores for further studies in America, specifically a doctorate at the University of Texas where as a Fullbright scholar he read Linguistics, Literature and Germanic Languages and wrote a dissertation on Samuel Beckett’s English fiction.

In that time he has become one of the world’s most distinguished novelists and critical thinkers. All of this has happened while also teaching and inspiring generations of students and colleagues, from Cape Town to Chicago, in his role as professor of literature – a position he currently holds at the University of Adelaide in South Australia, where he has lived since 2002.

His work has been recognised by numerous other honorary degrees by other eminent universities and he’s accumulated literary prizes, one after the other, and national honours from France and the Netherlands as well as South Africa’s highest award, the Order of Mapungubwe Gold. He was awarded the Nobel Prize for Literature in 2003.

Even without his fiction, a corpus which now includes some 13 novels and for which he has won Booker Prizes for Life and Times of Michael K in 1983 and for Disgrace in 1999; a Commonwealth Writers Prize, the Prix Femina Étranger, the Irish Times International Fiction Prize and many more.

Coetzee as a scholar would still be acquiring honorary degrees as not only are his novels taught in syllabi all over the world, but so is his criticism. From the essays collected in White Writing on colonial South African literature is a seminal book that is still unmatched since its publication in 1988; to those on censorship in Giving Offence, his intellectual autobiography of essays and interviews in Doubling the Point and the two volumes Stranger Shores and Inner Workings which feature many of the essays he’s written as a regular contributor to the New York Review of Books.

Even this does not adequately provide a sense of the range of his work, the variety and originality, the cross-generic hybrid and difficult to classic works such as the eight lessons of Elizabeth Costello; or the extraordinary polyphonic novel, Diary of a Bad Year; or the magnificent memoir trilogy Scenes from Provincial Life, or the translations from Dutch and Afrikaans; or his collaborative ventures for the adaptations of his novels for stage and screen.

20 years ago, when he was awarded an honorary doctorate at the University of Cape Town, his fellow novelist and colleague André Brink proclaimed that John Coetzee has changed not only the South African literary landscape, but the shape and horizons of the novel as a genre.

The magnetic affect is tangible, there are centres named after him, writes David Attwell, centres of creative writing, centres for creative and performing arts named after him; places in other ends of the world – Adelaide, Australia and Bogota, Columbia. There is even an asteroid named after Coetzee.

Years ago, in the South African press, Coetzee was variously called the Beckett of the Boland, the Kafka of the Karoo, the Faulkner of the veld. All three accolades are well chosen since they emphasise key writers in his formation and a landscape that has been central to much of his fiction. One could easily enumerate others – Dafoe, Dostoyevsky, Tolstoy, Cervantes, Flaubert, Pound and Rilke – but if we were to think of artists with a similar approach to work and style, I would still go elsewhere.

Two figures, remote from each other in time and vocation, for whom he has expressed admiration: In classical music it is of course JS Bach, in tennis it is of course Roger Federer. Both keep standing the test of time, demonstrating the kind of genius that combines industry, improvisation, intelligence and intuition. Qualities that have made them classic players in their respective fields, and qualities that you will find when you read the work of JM Coetzee.

Madame president, it is my privilege now to present professor John Maxwell Coetzee for the award of Doctor of Literature and to invite him to address this assembly.

After receiving the honorary doctorate from SOAS president Graça Machel, Coetzee said a few words of encouragement to the graduating class of 2015: Thank you first, Kai, for your kind words. It is an honour for me, and a pleasure, to be asked to say a few words to the new graduates of the School of Oriental and African Studies.

I was never a student at SOAS, but brother David was. David is, alas, no longer with us, but I can imagine what he would have said about the present occasion: “I had to attend lectures and sit exams to obtain my degree, while you have to do nothing but rock up for graduation day. It is an outrage.”

Those of you who plan to follow careers in higher education will, I hope, carry the values of SOAS with you into the future.