Alert! Chimamanda Ngozi Adichie’s novel Half of a Yellow Sun has been chosen as the “Best of the Best” of the winners of the last decade of the Baileys Women’s Prize for Fiction.

Adichie beat off competition from authors such as Zadie Smith (On Beauty), Eimear McBride (A Girl Is a Half-formed Thing) and Barbara Kingsolver (The Lacuna).

The Baileys Prize is the UK’s only book award for fiction written by women writers. The “Best of the Best” award was arranged to celebrate the 20th anniversary of the prize, with two weeks of programming with BBC Radio 4 Woman’s Hour leading up to last night’s gala event where the winner was announced.

Adichie, who won the prestigious Baileys Women’s Prize for Fiction in 2007, was chosen as the winner by a panel consisting of the 10 chairs of judges from the past 10 years. Muriel Gray, who was chair the year that Half of a Yellow Sun won the prize, says that what Adichie achieved with this novel was an “astonishing feat” which makes it “not just a worthy winner of this most special of prizes, but a benchmark for excellence in fiction writing”.

Members of the public were also invited to vote and they agreed with the judges – Half of a Yellow Sun is indeed the “Best of the Best”.

In her acceptance speech, filmed by the Women’s Prize for Fiction, Adichie says this is a “wondrous embrace” and wonderful for her ego as she has great respect for all the books that have been shortlisted and which have won the prize in the past decade.

Watch the video, or read a transcript below: 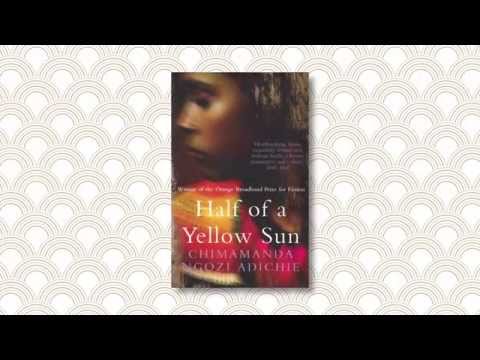 Being chosen as the best of the best is wonderful for my ego; it’s a very nice ego-burnishing tool. But it’s really an honour.

I remember the evening when I won the Women’s Prize. I remember that it was this lovely sparkling evening, full of lovely people. There was lot’s of champagne, which made me very happy, and I also remember that I was scared because I was worried that I would fall down. I was wearing particularly high heals, but I didn’t fall down. And I remember just being so happy to win!

When you are writing you don’t know what is going to happen. You are alone in your study for months, for years. You write a book, you send it out to the world. It’s like sending out your child that you love, and not knowing if this child will be embraced by the world. So when it happens … For me this is a wondrous embrace, to be selected best of the best, and also because I think that the books that have won have been really remarkable books! I have a lot of respect for the books that not only have won the prize, but that have been shortlisted.

It gave a boost to my readership. I think that it brought many readers to my work who might not necessarily have known about my writing. It meant that I suddenly had many readers who were not only reading the book that won the prize, but who were then waiting for the next thing so it was very much a boost to my career.

Read the press release by the Women’s Prize for Fiction:

We’re delighted to announce that Half of a Yellow Sun by Chimamanda Ngozi Adichie has been named the ‘Best of the Best’ of the winners of the second decade of the Baileys Women’s Prize for Fiction, as chosen by the Chairs of judges of the past ten years.

Half of a Yellow Sun, won the Women’s Prize for Fiction in 2007 and as ‘Best of the Best’ of the second decade of winners, Chimamanda Ngozi Adichie will receive a special-edition Bessie statuette, cast in manganese bronze.

Adichie follows in the footsteps of Andrea Levy who was named winner of ‘Best of the Best’ of the Prize’s first decade for her novel Small Island, which won the Women’s Prize in 2004.

Alison Flood reported on Adichie’s win for The Guardian. Read her article:

Pitted against nine other titles – from Zadie Smith’s On Beauty to Eimear McBride’s A Girl Is a Half-formed Thing – Chimamanda Ngozi Adichie’s novel of the Biafran war, Half of a Yellow Sun, has been named the best winner of the women’s prize for fiction of the last decade – by both the public and a 10-strong judging panel.

The award, now known as the Baileys women’s prize for fiction, chose to mark its 20th anniversary by asking the chairs of judges of the past 10 years – including Joanna Trollope, Shami Chakrabarti and Daisy Goodwin – to pick their “best of the best” winner from the last decade. Andrea Levy’s Small Island, which won the award in 2004, had previously been named the “best of the best” novel in the prize’s first decade.

Adichie is one of the most popular and lauded writers ever to come out of Africa. Originally from Nigeria, she now lives in the US. Her other critically acclaimed novels are Purple Hibiscus and Americanah.

« Carol Anshaw Reviews Under the Udala Trees by Chinelo Okparanta
Who Will Be Our “Story Bosso”? Nal’ibali Announces Their Storytelling Competition Shortlist (Plus: Videos) »