Alert! The Arts & Culture Trust (ACT) has named legendary poet and author Don Mattera as the recipient of the 2015 ACT Lifetime Achievement Award for Literature. 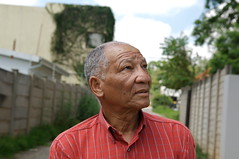 The award ceremony was held at the Maslow Hotel in Sandton.

The Literature category for the ACT Lifetime Achievement Awards was initiated in 2012. Nadine Gordimer was the inaugural recipient of the award, Elsa Joubert was given the honour in 2013 and André P Brink last year.

ACT CEO Pieter Jacobs says, “ACT is proud of the legacy of the awards perpetuated by the consistent efforts of praiseworthy artistic output of previous winners. Since the inception of the event in 1998, more than 140 individuals and organisations have been acknowledged and honoured for their contributions to arts and culture in South Africa and we can only hope to do more in the coming years.”

From the Arts & Culture Trust:

Recognised as one of Africa’s most preeminent writers, Donato Francisco Mattera was born in Sophiatown on 29th of December 1936. His work is considered to be an incredibly valuable contribution towards anti-apartheid discourse and South African literature as a whole. Mattera has spent most of his life making a case for social justice and the transformation of society.

In the years 1973 to 1982 Mattera was banned by the apartheid government and during this period he was placed on house arrest for three years, where he turned to writing as an outlet. He penned poetry, plays, short stories and novels – and his works range from political tributes and eulogies, to praise songs and deeply emotional love songs.

Following the nine years in which Mattera was banned, he became a founding member of the Black Consciousness movement and also joined the ANC Youth League (ANCYL). He helped form the Union of Black Journalists as well as the Congress of South African Writers.

He has also worked as a journalist for The Sunday Times, The Sowetan, and Mail & Guardian formerly known as the Weekly Mail.

Mattera was awarded an Honorary PhD in Literature from the University of Natal and was described by fellow writer and iconic activist Es’kia Mphahlele as an “ageless literary activist who makes music with his poetry”.

On the same evening the ImpACT Awards, which acknowledge young professionals in the arts, were won by POPArt for Theatre, Laurie Wiid van Heerden for Design, Benon Lutaaya for Visual Art, Lindiwe Maxolo for Music and Singing, Letlhogonolo Nche for Dance and Jessica Denyschen was awarded a Special Honorary Award for her contribution in South Africa’s dance industry.