Alert! The winners of the 2015 Maskew Miller Longman Literature Awards (MMLLA) were announced at the Pearson head offices in Cape Town last night.

The MMLLA was launched in 2006 by Maskew Miller Longman as their commitment to develop quality literature in all official languages for young readers and to encourage a love of reading in learners’ mother tongue.

The competition acts as a platform to encourage and provide support for aspiring writers who wish to produce literary work in the language of their choice. It remains the only literature competition that gives equal weighting to all 11 official South African languages, reflecting the commitment to developing quality literature in all official languages for young readers.

The competition explores a different genre each year. In 2015 a call was made for Children’s Fiction and a total of 122 entries were received, with 50 percent being written in African languages.

Finalists include a teacher with a passion for theatre, freelance translator, freelance journalists and writers, a church leader with a focus on the youth, and a community project member who helps children discover nature through art. Among the 8 finalists there are debut as well as multi-award-winning writers.

Before the prizegiving, celebrated children’s and young adult author Diane Case delivered the keynote address. She was the English winner in the MML Literature Awards 2007.

Spending time with children, which is something she does often as a very active grandmother and involved community member, and her own childhood memories inform Case’s emphatic stories. She shared many touching anecdotes to give examples and stressed throughout her address that “children are not stupid”.

Through witnessing kids’ reactions to not only her stories but other South African narratives too, Case has found enough evidence to say with authority that localised stories – especially those told in a child’s mother tongue – make children feel relevant and help them to articulate their South African world.

Her books tend to create empathy in readers and offer a glimpse of what life was, and in some respects still is, for many people in South Africa. Her first novel, Albatross Winter, was published by Maskew Miller Longman in 1983.

After Case’s spirited address, Brian Wafawarowa, Pearson SA Executive Director for Learning Resources took the stage to announce the winners and present them with their books, hot off the press.

Without further ado, here are the winners of the 2015 Maskew Miller Longman Literature Awards (in alphabetical order): Read about each of these authors and their books: 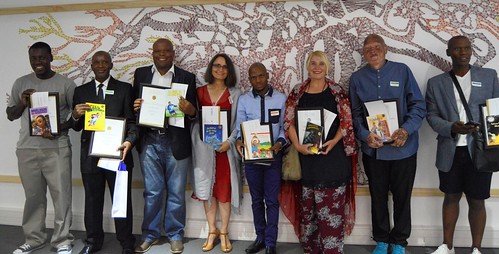 Pearson South Africa will host the Maskew Miller Longman (MML) Literature Awards on Wednesday, 25 November 2015, 17:00-21:00 at its Auto Atlantic Office in Cape Town to announce the winners of this national literature competition. Annually, Pearson invites experienced, new and aspiring writers to submit their original, unpublished stories in their mother tongue to develop quality literature in all of the official South African languages.

The competition judges had the difficult decision of selecting only 8 finalists, from hundreds of submissions received for children’s stories aged 9 to 12. Many of whom work in other industries unrelated to writing and awarded them the opportunity to follow their passion and see their dreams realised.

Tshifhiwa Given Mukwevho, a freelance journalist and one of the (Tshivenda) finalists said: “I have found the MML Awards to be a strong foundation and basement for writers (like me) who still see writing in indigenous languages as a cause worth establishing and celebrating.”

In support of the writers, Pearson hosted a free writer’s workshop in February 2015. The workshop was hosted by Niki Daly, renowned author and illustrator who is respected in the industry for his contribution to children’s fiction and art. The 2014 MML Awards Tshivenda winner, Khalirendwe Nekhavhambe attended and workshop and remarked that it had provided her with invaluable knowledge and skills that left her feeling empowered, motivated and confident as a writer.

Brian Wafawarowa, Pearson SA Executive Director for Learning Resources says: “We are proud to be a part of this annual celebration of ethnic language literature in South Africa’s official languages. Literature is an important element in improving literacy in our country, we encourage people to read and enjoy literature in their mother tongue. We support all initiatives that will help to improve education in some way.”

Award-winning South African author, Dianne Case will be the guest speaker at this year’s Awards ceremony. She has written several successful children’s books.

Next year the Maskew Miller Longman Literature Awards will celebrate literature for teenagers. YA authors of all South African languages, start writing! Keep an eye on Books LIVE for information on how you can enter.

Congratulations to the 2015 winners!