Sunday Read: Meet the Real Lady in the Van and Listen to an Excerpt from Maggie Smith: A Biography In 1974 an elderly and eccentric Miss Mary Shepherd parked her van in writer Alan Bennett’s driveway in Camden Town, where she remained until her death 15 years later.

Bennett and Miss Shepherd had a peculiar bond. In his diary in the London Review of Books, Bennett writes of their first encounter when she coaxed him into pushing her van to Albany Street. The experience left him with the unsettling feeling that “one seldom was able to do her a good turn without some thoughts of strangulation”.

Yet Bennett invited Miss Shepherd to stay, another “good turn” she would not admit to being grateful for. “To have allowed herself to feel in the least bit grateful would have been a chink in her necessary armour, braced as she always was against the world,” Bennett writes in his definitive work on Miss Shepherd, The Lady in the Van: The Complete Edition.

During their 15 years together the writer observed Miss Shepherd, and in 1999 Dame Maggie Smith portrayed her in the hit West End play, The Lady in the Van. The film by the same name, and with Smith in the lead once again, was released in the United Kingdom on 13 November, and will come to South Africa in December this year.

Read an excerpt from Bennett’s diary, in which he remembers their first encounters:

She must have prevailed on me to push the van as far as Albany Street, though I recall nothing of the exchange. What I do remember as I trundled the van across Gloucester Bridge was being overtaken by two policemen in a panda car and thinking that, as the van was certainly holding up the traffic, they might have leant a hand. They were wiser than I knew. The other feature of this first run-in with Miss Shepherd was her driving technique. Scarcely had I put my shoulder to the back of the van, an old Bedford, than a long arm was stretched elegantly out of the driver’s window to indicate in textbook fashion that she (or rather I) was moving off. A few yards further on, as we were about to turn into Albany Street, the arm emerged again, twirling elaborately in the air to indicate that we were branching left, the movement done with such boneless grace that this section of the Highway Code might have been choreographed by Petipa with Ulanova at the wheel. Her ‘I am coming to a halt’ was less poised as she had plainly not expected me to give up pushing and shouted angrily back that it was the other end of Albany Street she wanted, a mile further on. But I had had enough by this time and left her there with no thanks for my trouble. Far from it. She even climbed out of the van and came running after me, shouting that I had no business abandoning her, so that passers-by looked at me as if I had done some injury to this pathetic scarecrow. ‘Some people!’ I suppose I thought, feeling foolish that I’d been taken for a ride (or taken her for one) and cross that I’d fared worse than if I’d never lifted a finger, these mixed feelings to be the invariable aftermath of any transaction involving Miss Shepherd. One seldom was able to do her a good turn without some thoughts of strangulation.

The Guardian has selected extracts from Bennett’s The Lady in the Van: The Complete Edition, with touching illustrations by David Gentleman.

In the article, Bennett reflects on why he invited Miss Shepherd to park her van in his driveway that day, the making of the film and the fine line between the two Alan Bennetts as both observing writer and participating character.

It’s now over a quarter of a century since Miss Shepherd died, but hearing a van door slide shut will still take me back to the time when she was in the garden. For Marcel, the narrator in Proust’s Remembrance of Things Past, the sound that took him back was that of the gate of his aunt’s idyllic garden; with me it’s the door of a broken down Commer van. The discrepancy is depressing, but then most writers discover quite early on that they’re not going to be Proust. Besides, I couldn’t have heard my own garden gate because in order to deaden the (to her) irritating noise, Miss Shepherd had insisted on me putting a piece of chewing gum on the latch.

Watch the trailer for The Lady in the Van: 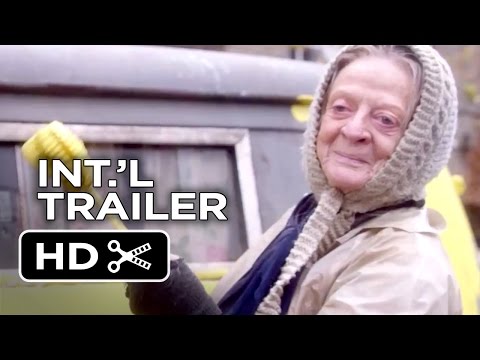 Smith is captivating in her poignant portrayal of a vagrant woman who’s touched the life and imagination of a brilliant but self-deprecating writer.

Bennett and Smith were both born in 1934 and have walked a long road together on stage and off, as readers will note in Michael Coveney’s Maggie Smith: A Biography.

In an interview with The Telegraph for his 80th birthday, Bennett recalls attending another 80th back in 1997 with Smith:

In a diary entry for February 1997, published in his memoir collection Untold Stories, Alan Bennett describes an 80th birthday party for the stage designer Jocelyn Herbert at the Royal College of Art. The place is packed.

“I sit on a sofa with Alan Bates and Maggie Smith,” he writes, “thinking that no one would ever arrange such a do for me or get so many people to come. I turn to Maggie and she says: ‘Don’t say it. I know. I don’t think I could even fill the kitchen.’”

Image courtesy of The Telegraph

« RIP Mark Behr (1963 – 2015)
5 Sunday Reads: An Interview with Orhan Pamuk, an Essay from Diana Abu-Jaber’s Upcoming Life Without a Recipe and More »