A Swedish translation of Chimamanda Ngozi Adichie’s We Should All Be Feminists – titled Alla Borde Vara Feminister and published by Albert Bonniers Förlag – was unveiled yesterday. The text originated as a TEDx talk in 2013, in which Adichie combined her personal experience of growing up in Nigeria with an acute analysis of the complexity of modern feminism. Part of the talk was famously sampled by American pop star Beyoncé in the song “Flawless”.

The book launch was held at Norra Real secondary school in Stockholm, where it was announced that each second grade high school student in Sweden (16 year olds) will receive a copy – with more than 100 000 copies distributed so far.

Clara Berglund, chair of the Swedish Women’s Lobby, said: “This is the book I would have wanted to get for all the guys in my class when I was 16 years old. That is why it is so important that we contribute to this project. It is a gift to all students in grades two, but also a gift to ourselves and to future generations.”

Albert Bonnier publisher Johanna Haegerström said: “Our hope is that the Chimamanda Ngozi Adichie text will open up a conversation about gender and gender roles, starting from young people’s own experiences.”

Adichie sent a special greeting to the schoolchildren:

“Mostly, I hope very soon that one day we will not need to be feminists. Because we will live in a world that is truly just and equal.” 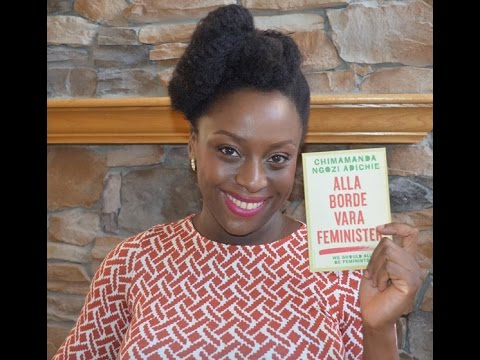 In other news, Adichie was recently shortlisted for the 2015 Forbes Africa’s Person Of The Year Award, although she lost out to Tanzanian businessman Mohammed Gulam Dewji. However, the Nigerian author received a Special Recognition Award for her contribution to literature:

Image courtesy of The Times