Jacob Dlamini and Imraan Coovadia among the winners at the inaugural NIHSS Book, Creative and Digital Awards

Awards were also handed out in the categories Digital Humanities and Creative Collections. Each award is valued at R60,000.

Submissions for the awards were open to academics from the humanities and social sciences, as well as creative curators and artists based at South African universities, in any of South Africa’s official languages.

The NIHSS is funded by the Department of Higher Education and Training.

Ashraf Garda was the master of ceremonies, and the keynote address was given by Minister of Higher Education and Training Blade Nzimande.

Nzimande expressed his delight at the overwhelming response and high standard of entries that the awards received from academics and other practitioners in the field.

“A renewed focus on the importance of the humanities and social sciences is absolutely critical in a world that increasingly values the Sciences, Engineering, Technology and Mathematics (STEM) as the only measure of development and progress,” Nzimande said.

“The role of the humanities and social sciences must not only assist us in analysing and interpreting the world we live in, but it must enable us to change the material conditions and lived experiences of those most marginalised and alienated in society.”

Imraan Coovadia for Tales of the Metric System

Adults Only, edited by Joanne Hichens

(Shortlisted: Amitabh Mitra and Naomi Nkealah for Splinters of a Mirage Dawn: An Anthology of Migrant Poetry from South Africa) 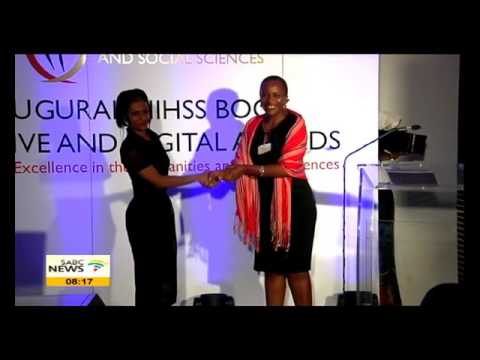 View some tweets from the event:

I'm very excited about the @INIHSS Awards this evening. Let me get ready

The NIHSS is proud to host the Inaugural #NIHSSAwards which honour innovative, excellent & socially responsible scholarship.

The #NIHSSawards recognise the public value of scholarly & artistic work in the Humanities & Social Sciences which often goes unnoticed.

The # NIHSSAwards reflect the diversity of South African society, the arts and academia

Just over an hour to me MCing the #NIHSSAwards – celebrating intellectual excellence pic.twitter.com/kR2Z8wcb8d

The Institute is taking off at an important time for universities. Need to unpack what we mean by 'decoloniality' -Min Nzimande #NIHSSAwards

To date we (NIHSS) have awarded 300 scholarships. Over 70% awarded to women – Min Nzimande #NIHSSAwards