It’s been a busy week for Chimamanda Ngozi Adichie. The internationally acclaimed Nigerian novelist was awarded an honorary doctorate by Johns Hopkins University on Wednesday, but the day before, in a ceremony that flew under the radar, she was also awarded the 2016 Barnard Medal of Distinction from Barnard College.

In the medal citation, the college said of Adichie: “You spark the conversation, upend the status quo, and open our hearts and minds to the world.

“We honour your work, your humour, your respect for history, and your vision for the future. In your footsteps, we will all be feminists, unlearning what we have been taught to believe in order to dream for ourselves. Steering clear of the single story in favour of an ever more kaleidoscopic view. Staying true to who we are, messy though that may be.”

In a video filmed at the ceremony, Adichie gives some advice to the students receiving their degrees: “Eat real food, be kind to yourself, and read books.”

I think it’s important for young women to remember that they are much stronger than the world tells them that they are. 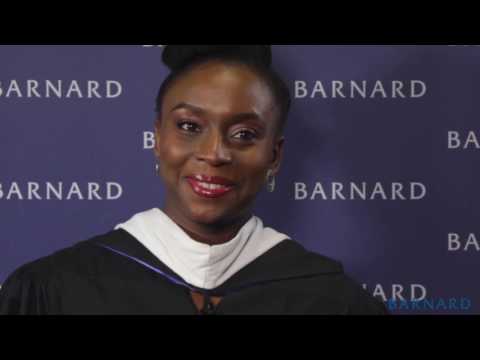 Being born in Nigeria in 1977, the fifth of six children, was clearly a significant start. Your father was a professor, your mom the University registrar, and your childhood, a happy one, though tinged by the legacy of war. Books were your haven and your guide, and by age 10 you had read enough to know that people just like you could, in fact, inhabit them.

In 2003, that gift took the form of Purple Hibiscus, your first novel and one to notice, about breaking free and defying expectation. Three years later, in Half of a Yellow Sun, you gave voice to the ravages wrought by your country’s Civil War decades before, and for it, won international acclaim and the Orange Prize for Fiction. You were thirty years old. And in 2013, with Americanah, you wove a post-9/11 story of race and identity that has been hailed as a benchmark for literary excellence—one of The New York Times Top Ten Best Books of the Year, winner of the US National Book Critics Circle Award, and the object of heaps of attention. And your TED talks, The Danger of a Single Story and We Should All Be Feminists have multi-millions of views. You write, we read. You speak, we listen.

We honor your work, your humor, your respect for history, and your vision for the future. In your footsteps, we will all be feminists, unlearning what we have been taught to believe in order to dream for ourselves. Steering clear of the single story in favor of an ever more kaleidoscopic view. Staying true to who we are, messy though that may be.

On behalf of my alma mater, it is an extraordinary privilege to present to you the 2016 Barnard Medal of Distinction, with all due gratitude, reverence, and heart.