Small became a lecturer in philosophy at the University of Fort Hare in 1959, and in 1960 he was one of the academic founders of the University of the Western Cape, when he was appointed Head of the Philosophy Department. In the early 1970s he joined the Black Consciousness movement.

In 1973 he was pressured to resign from the UWC, which prompted a move to Johannesburg, where he became the Head of Student Body Services at Wits University. He returned to Cape Town in 1977, where he was Director of the Western Cape Foundation for Community Services until 1983. In 1984 he returned to the UWC as the Head of the Social Services Department, a position he held until his retirement in 1997. 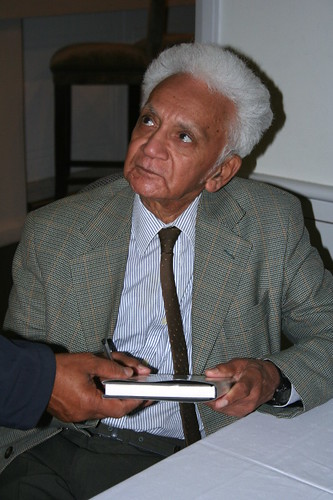 Small made his debut as a poet in 1957 with Verse van die liefde. Some of his other well known poetry volumes include Kitaar my kruis (1961) and Sê Sjibbolet (1963). His best known theatrical drama is Kanna hy kô hystoe (1965).

He was awarded the Hertzog Prize in 2012, for his contribution to drama. The award, long overdue, was not without controversy as the prize is usually awarded to a writer who has published new work.

His play The Orange Earth, written in 1978 in the heyday of apartheid and two years after the Soweto Uprising, was published for the first time by NB Publishers in 2013. At the same time his first poetry collection in 40 years, Klawerjas, was also published.

City of Cape Town Mayor Patricia de Lille paid tribute to Small, saying: “It is with great sadness that I have learnt of the passing of one of our county’s dear sons, Adam Small.

“As a writer and poet, Adam Small used his craft to highlight the oppression suffered by the working class under the apartheid regime.

“Last year I was honoured to sit next to Adam Small and listen to his famous pieces, ‘Kô lat ons sing’ and ‘Oos wes tuis bes Distrik Ses’. Many years after he had written those pieces, his words and the emotions were still so vivid and touching. On behalf of the City of Cape Town, I extend my deepest condolences to the family and friends of Adam Small.

“Rest in peace Adam Small. We will always remember you for your great contribution to literature and the Struggle.”

Books LIVE sends condolences to Small’s wife, Rosalie, and his family and friends.