Memories of Love and Struggle: read an excerpt from Fatima Meer’s memoir 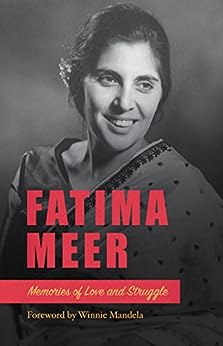 Activist and writer Fatima Meer devoted herself to resisting racism when she was just 17 years old; the first public act of defiance in a long and pioneering life of campaigning against injustice. Assassination attempts, petrol bombs, and threats against her family did not deter this fearless, selfless, and courageous woman.

Read an excerpt from her memoir here:

There were many ways in which non-European students were discriminated against and we organised against the racist practices we encountered at the University. For example, non-European students were not allowed to wear the College blazer, the rationalisation being that the blazer was only worn by those participating in sport. So to qualify for the blazer we first had to qualify for the College sports teams, but we were not interested in sports. We insisted that the blazer belonged to the University and we as students of the University thus had the right to wear the blazer. We insisted that the rules regarding the wearing of the blazer be changed to make it accessible to all students. We were also not allowed to be members of the National Union of South African Students (NUSAS) in those days. Phillip Tobias, 40 as I recall, was then the president of NUSAS and he held a NUSAS meeting at Sastri College. I made a point of attending the meeting and I challenged him on the exclusion of non-European students from NUSAS. Mabel Palmer, the Fabian socialist who organised the non-European section of the University and was one of our lecturers, had the task of ensuring that the NUSAS meeting remained pure white. She sent her secretary to check whether there were any non-European students present and the secretary, on finding me present, asked me to leave. I refused and criticised NUSAS for its racism. The University used to have dances but they were petrified that there would be “mixed” dancing between European and non-European students and so the senior marms used to be put on duty to ensure that rule was never infringed. The expedient explanation was that it was in the interest of the non-Europeans that these rules were observed because if the white community heard of mixed dancing on the campus, they would insist on closing down the non-European section of the University. The Drama Department staged a play by Shakespeare at the main campus and free tickets were offered to the non-European students. However, these were for segregated performances and the non-European Student Representative Council took the decision to refuse the tickets. Mabel Palmer called me in together with a few other students and tried to persuade us to attend the performance. Her final argument was to recite the dictum ‘All work and no play made Jack a dull boy’. Our retort was that none of us were ‘Jacks’. We were ‘Fatimas’, ‘Vassies’ and ‘Muthumas’.

That year the officials of the non-European SRC called on the non- European graduates to boycott the graduation ceremony until such time as the University eliminated their practices of racially segregated seating of parents and of presenting graduates by race (rather than in alphabetical order). The first two names on the statement protesting the segregation were those of fellow student activist Vasi Nair and myself. Mabel Palmer called the two of us into her office. She argued that we had accepted segregated classes, why then did we object to segregation at the graduation ceremony. We told her that we needed the education and it was only available to us through segregated classes. Attending segregated classes was degrading, but we were prepared to concede that degradation out of necessity. However, we could exercise a choice in attending the graduation ceremony or not. Our view was that this liberal white university had every freedom to desegregate its student body. All in all, that graduation ceremony was farcical as students heeded our boycott graduation call. The non-European students were just not there. As the graduation ceremony began it became clear that this was a “whites only” ceremony. The City Hall was clearly demarcated between non- European and European seating. As always the academic procession was all white. There was an awful emptiness and silence as the names of non-European students were called out. No other university had pretended to offer post-matric education to non-Europeans. Every other university had obsequiously heralded the apartheid logo of the racist government. In my exhilaration, I felt sorry for the Trojans like Mabel Palmer, Florence McDonald and Elizabeth Sneddon who had set up the classes for non-European students. I wished they were equally victorious with us because in fact they sympathised with us, even though they did not articulate that sympathy.