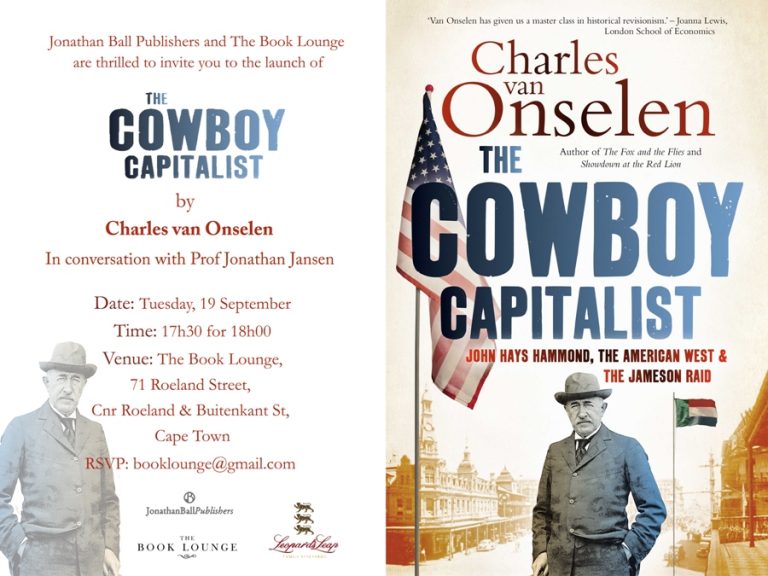 The Jameson Raid was a pivotal moment in the history of South Africa, linking events from the Anglo-Boer War to the declaration of the Union of South Africa in 1910. For over a century the failed revolution has been interpreted through the lens of British imperialism, with responsibility laid at the feet of Cecil John Rhodes. Yet the wild adventurism that characterised the raid resembles a cowboy expedition more than a serious attempt to overthrow a Boer government.

In The Cowboy Capitalist, Charles van Onselen challenges a historiography of over 120 years, locating the raid in American rather than British history and forcing us to rethink the histories of at least three nations. Through a close look at the little-remembered figure of John Hays Hammond, a confidant of both Rhodes and Jameson, he discovers the American Old West on the South African Highveld.

This radical reinterpretation challenges the commonly held belief that the Jameson Raid was quintessentially British and, in doing so, drives splinters into our understanding of events as far forward as South Africa’s critical 1948 general election, with which the foundations of Grand Apartheid were laid.

Charles van Onselen is the acclaimed author of several books including The Fox and the Flies, Masked Raiders, and The Seed is Mine, which won the Alan Paton in 1997 and was voted as one of the best books to emerge from Africa in the 20th century. His latest book, Showdown at the Red Lion, has been opted for a TV series. Van Onselen has been honoured with visiting fellowships at Yale, Cambridge, and Oxford, and was the inaugural Oppenheimer Fellow at Harvard’s WEB Du Bois Institute. He is currently Research Professor in the Faculty of Humanities at the University of Pretoria.