And our sunshine noir author for October is … Paul E. Hardisty

This month, the co-author of the popular Detective Kubu series, Michael Sears, had the opportunity to interview Paul Hardisty for The Big Thrill – the magazine for international thriller writers. 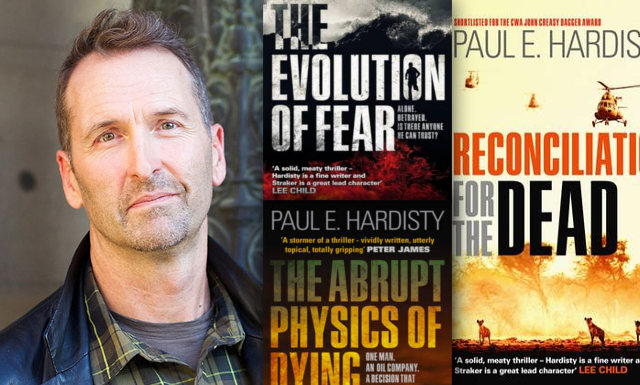 Here’s what Michael and Paul chatted about:

A Canadian by birth and now the CEO of the Australian Institute of Marine Science based in Queensland, Paul Hardisty has spent 25 years working all over the world as an engineer, hydrologist, and environmental scientist. He has rough-necked on oil rigs in Texas, explored for gold in the Arctic, and rehabilitated village water wells in the wilds of Africa. He survived a bomb blast in a café in Sana’a in 1993, and was one of the last Westerners out of Yemen before the outbreak of the 1994 civil war.

Yemen was the setting for Hardisty’s powerful debut thriller, The Abrupt Physics of Dying, which was short-listed for the Crime Writers Association Creasy New Blood Dagger award – the premiere British award for first novels in the mystery/thriller genre. It was followed by The Evolution of Fear last year.

Paul’s protagonist, Claymore Straker, is a South African who went through the mill of the Angola war and was badly chewed up in it. In Reconciliation for the Dead we find out what really happened to him then and why. It’s Clay’s backstory.

How much of that story have you always known, and how much have you developed in the writing of this book?

I have been thinking about and working on the plot and character elements of this series for the last 15 years. Clay’s experiences as a young man growing up in South Africa during apartheid were always going to be the essential backstory for the books, and I had a number of pretty specific events from his past fixed quite early. These appear as fragments of flashbacks and recollections in the first two books, which are set 13-plus years later, after Clay has been dishonorably discharged and exiled from SA.

In the third book, Reconciliation for the Dead, Clay goes back to South Africa to testify to Desmond Tutu’s Truth and Reconciliation Commission (TRC), seeking amnesty for the terrible things he did during the war. His testimony provides the vehicle for us to go back to 1981, and explore Clay’s past in detail. It explains why Clay is the distant, emotionally closed, damaged man we meet first in The Abrupt Physics of Dying. The progression has been a natural one, I think, and has built suspense. So when you finally find out just what happened back then that was so bad, I hope it pretty much blows you away.

A Truth and Reconciliation Commission meeting

Much of the book takes place when he is 21, fighting in the undeclared war in Angola on the side of the South African army. The theme of the book is largely his personal disillusionment with the defense of white South Africa as he learns about the abhorrent things that it’s doing. Yet he finds himself unable to join the other side, whatever his sympathies. Is this unresolved internal tension at the heart of the character we see in the books that are set later?

Absolutely. The man we meet in the first two books is simply unable to forgive himself for what he has done. It forces him, eventually, back to testify to the TRC, in an attempt to win amnesty, but mostly to find some kind of absolution. Throughout this, Rania, the other main character, is trying to help him understand that forgiveness is possible, and that most importantly, he must learn to forgive himself.

Most of the book takes place in South Africa and Angola. How did you develop the background knowledge to set a book in two countries you don’t know well?

Actually, I have worked extensively across Africa over the last 30 years. I was married in West Africa in the 1980s, was in Ethiopia in the early ’90s as the Mengistu regime fell, and have traveled extensively across Southern Africa. So I know some of the continent pretty well, and obviously, tried to set as many of the scenes as I could in places I know. I have supplemented that with extensive research on the period (1980-82), and mention a couple of key sources in the back of the book. I also consulted with friends who were there at the time.