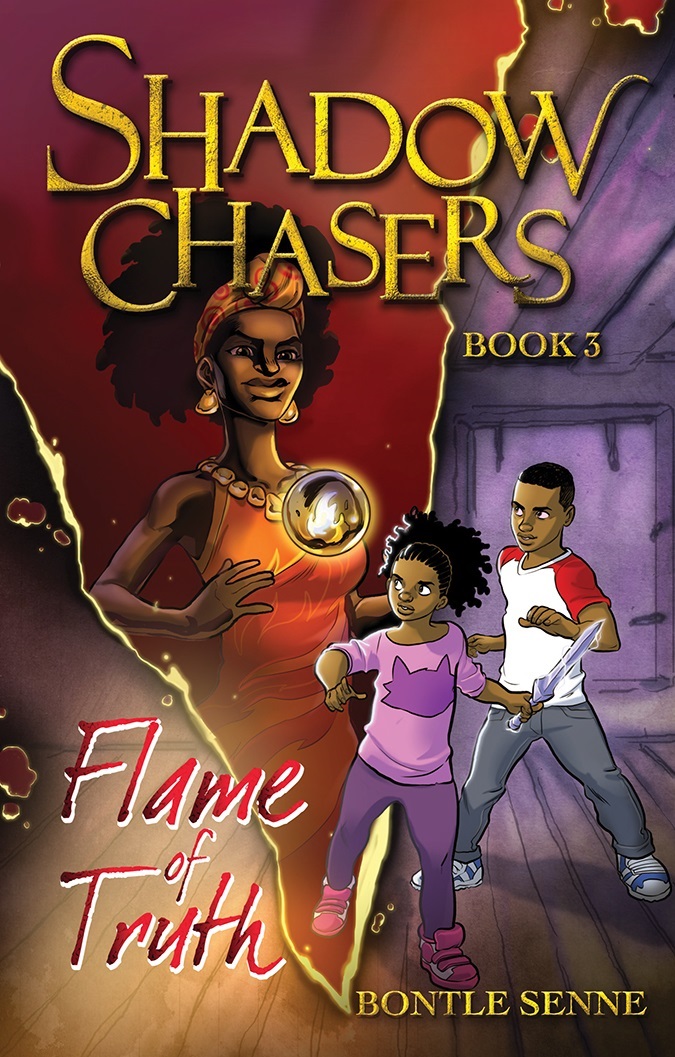 Only the Shadow Chasers, with their magical knives, can save the world from the evil that lives in the dreamworld.

“I love the book because it’s scary and cool. Nom is a very brave girl.” – Gugulethu Machin, tweeny reader

Flame of Truth is the third in the Shadow Chasers series, an Afrocentric fantasy adventure for pre-teens (9 to 12 year olds.)

Bontle Senne is a book blogger and literacy advocate. She is a former managing director at the Puku Children’s Literature Foundation, a trustee of READ Educational Trust and a part owner of feminist trade publishing house Modjaji Books. 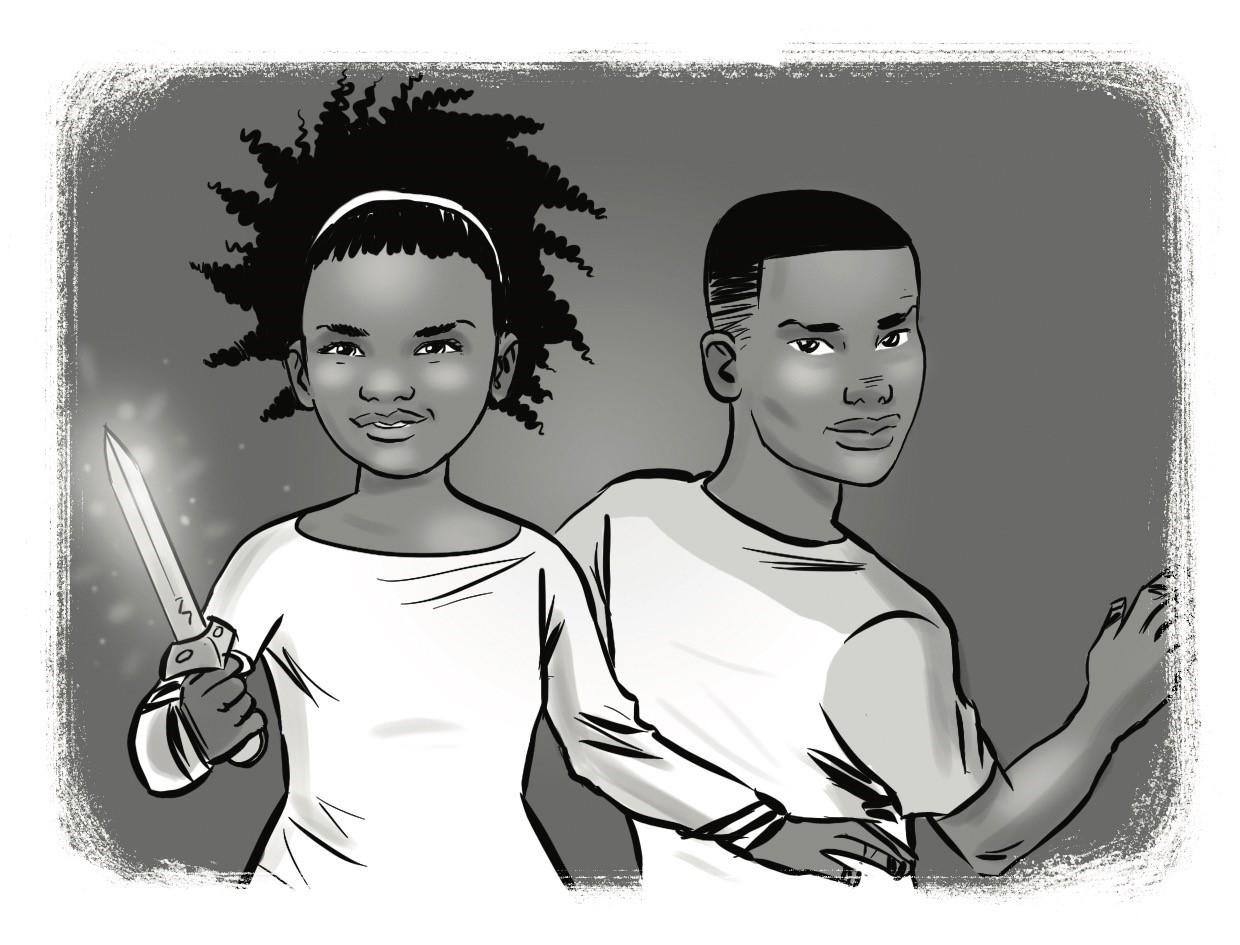 They hear the piercing scream of the Lightning Bird as another ball of flames falls from the dark sky and explodes on the patch of sand at the cave opening.

Nom and Zithembe lie on their bellies in the dirt, trying to stay low in the shadows so that the Lightning Bird does not come into the cave to find them.

“Nom, when we get out of here … ,” Zithembe whispers bitterly, pressing his cheek to the ground so he can look at Nom and she can see how annoyed he is.

Nom rolls her eyes and shifts her attention to the cave opening. She can’t hear the Lightning Bird, but that doesn’t mean it’s not waiting for them just outside the cave, ready to drop another ball of fire. “There was no way I could have known that it was going to come all the way up to the mountains,” Nom says. “I thought these things stayed in the forest!”

“Who told you that?” Zithembe snaps.

“Rosy! Well, kind of Rosy. I think that’s what she said …” Nom thinks back to a few weeks ago when she and Rosy, Zithembe’s cousin, had come into the dreamworld and were chased by the Lightning Bird. The giant black bird had flown over them, circling, stalking. With its long, curved beak, shaggy chest feathers, two sets of wings, and two long, orange legs, it had terrified her and brought back Rosy’s darkest memories. 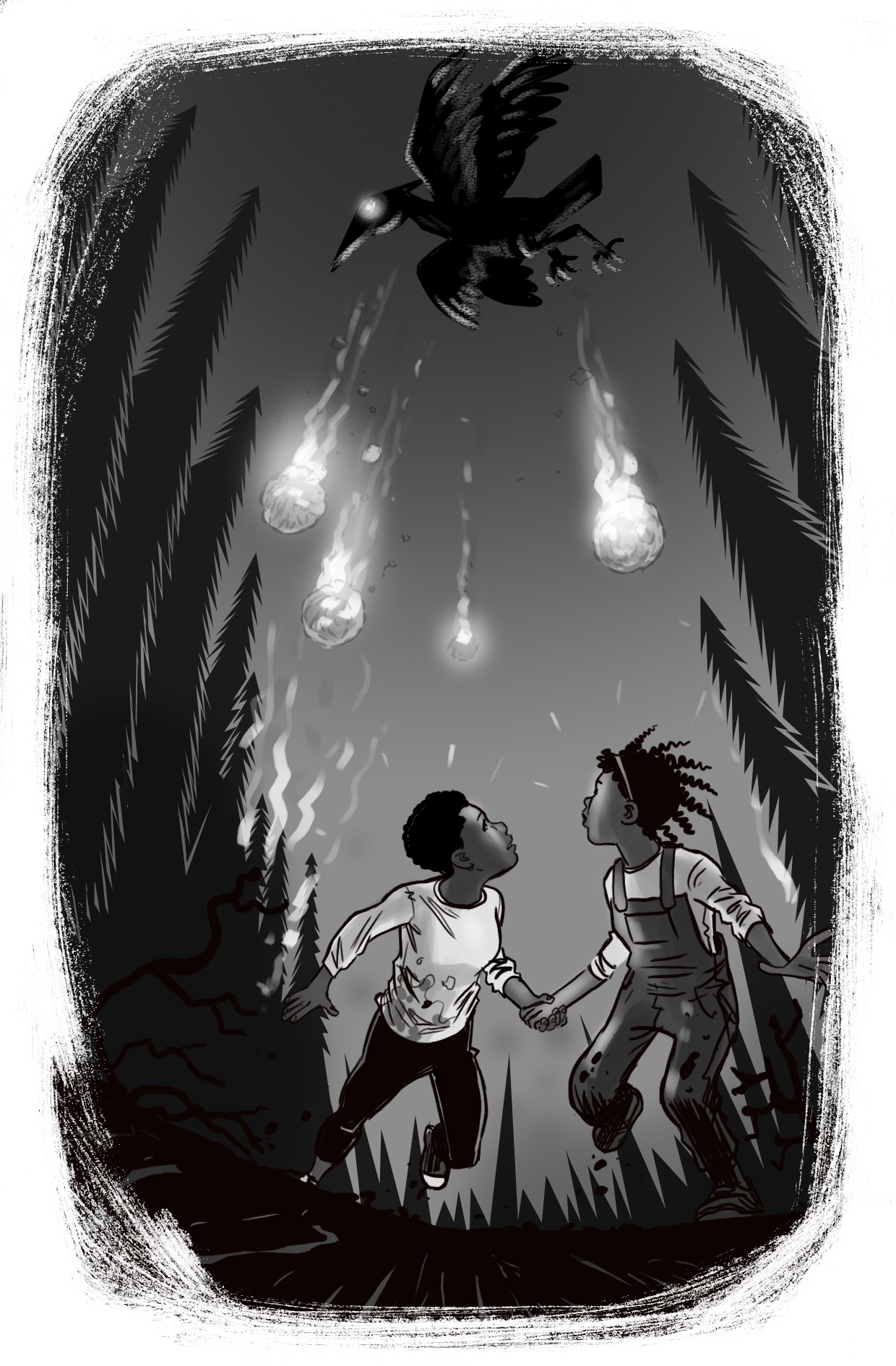 Now, when Nom reaches out and her hand finds the cave wall, the stone feels cool and wet. She feels the magic of the dreamworld buzzing lightly through the tips of her fingers. It’s the same feeling she sometimes gets when she holds her knife. A Shadow Chaser’s knife has powers that she and Zithembe are only just starting to understand.

“We could go back,” she suggests, already guessing what Zithembe will think of that idea. Zithembe groans as a clap of thunder booms from outside the cave.

“We cannot just go back,” he says. “We have to find my mother. How can we find her if we go back?”

“Zee, we’re not going to be able to get out of here without getting roasted. We can use the special powers in your knife to get home, and then try another night. We can come back in a few days with – I don’t know – a plan or something.”

It is weird for Nom to suddenly be the one with a plan. She’s never really been known for thinking things through. They got stuck here in this cave because when Nom saw the Lightning Bird she turned and ran before Zithembe could even ask what was going on. They had scrambled further up the mountain they were exploring. Then Nom dragged Zithembe into the cave just as the balls of fire began to rain down on them, burning holes the size of soccer balls into the sand. Nom had been right to be afraid, but she could have at least warned him before she started running.
It was so often “act and then think” with her. At least Zithembe had finally gotten used to that.

“I have a better idea,” Zithembe says. “You should use your knife to turn yourself into a Lightning Bird.” 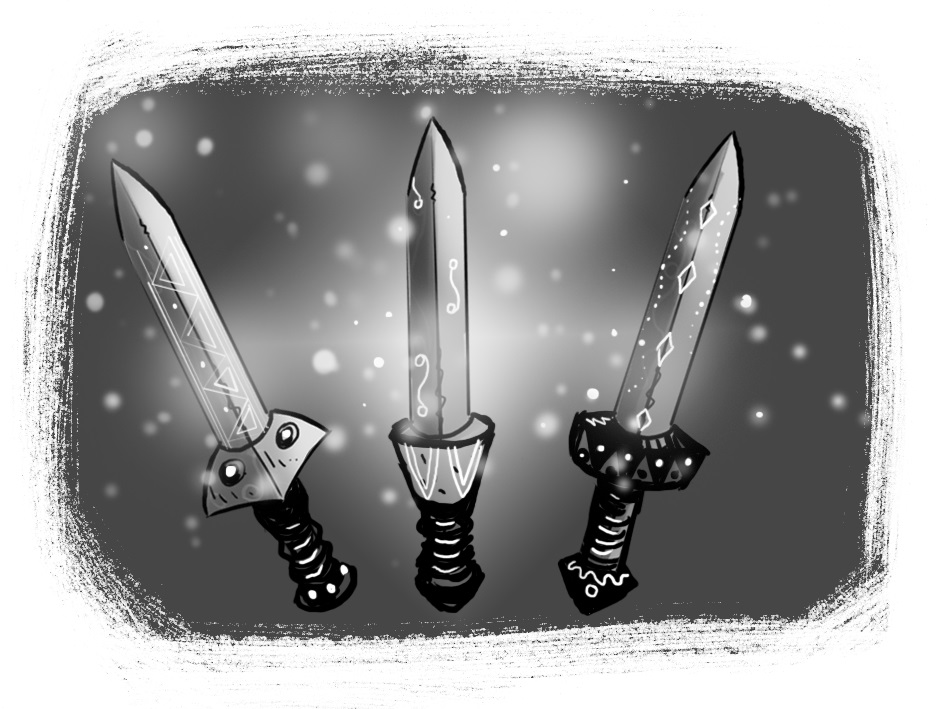 “What?” Nom asks, even though she’s pretty sure she heard him.

“You should turn yourself into a Lightning Bird,” Zithembe repeats, replaying what his mother had told him about the power of Nom’s blue knife to change her into someone – or something – else. “I’ll jump on your back and we can fly out of here and into the forest.”

If they weren’t trapped, crawling on their stomachs in the dark, Nom would punch Zithembe. “But the forest is where it lives!” she says, feeling deeply frustrated.

Nom remembers the forest from her visit to the dreamworld with Rosy, when they fought the Mami Wata.

“OK, then we fly to the Clearing or to the Lake of Memories,” Zithembe suggests.

Being annoyed isn’t helping, so Nom sighs and tries to be kind instead.

She says, “Zee, listen to me. There are soldiers of the Army of Shadows everywhere. Even now, the shadow men must be marching towards us. Your knife’s power can get us out of here safely. I know you want to find your mom. I want to find her too, Zee, but not today …”

They are quiet for a few minutes.

Nom isn’t sure whether Zithembe is still trying to think of ways to get out of this cave and keep exploring the dreamworld or whether he is trying to accept the truth in her words. As she waits for him to speak again, Nom sees a cloud of pale orange dust float into the cave.

The dust cloud stops just in front of them, blocking their view of the cave’s opening, and then drifts down low to the ground where they lie.

“Nom … Zithembe,” says the soft, faraway voice of a girl.

Zithembe twists his head to look at the floating dust and then back at Nom.

“Did that dust thing just speak?” Nom asks, saying out loud what both of them are thinking.

“I have a deal for you,” whispers the dust. “Help me rescue my friend fromthe Army of Shadows and I will help you find Itumeleng.”

“Who – or what – are you? Why should we believe you?” Zithembe asks.

There’s a trace of anger dripping into his voice. He wants to save his mother, but how can he trust a floating cloud of dust? Any of the magical things in the dreamworld could trick him into trapping himself or Nom here. 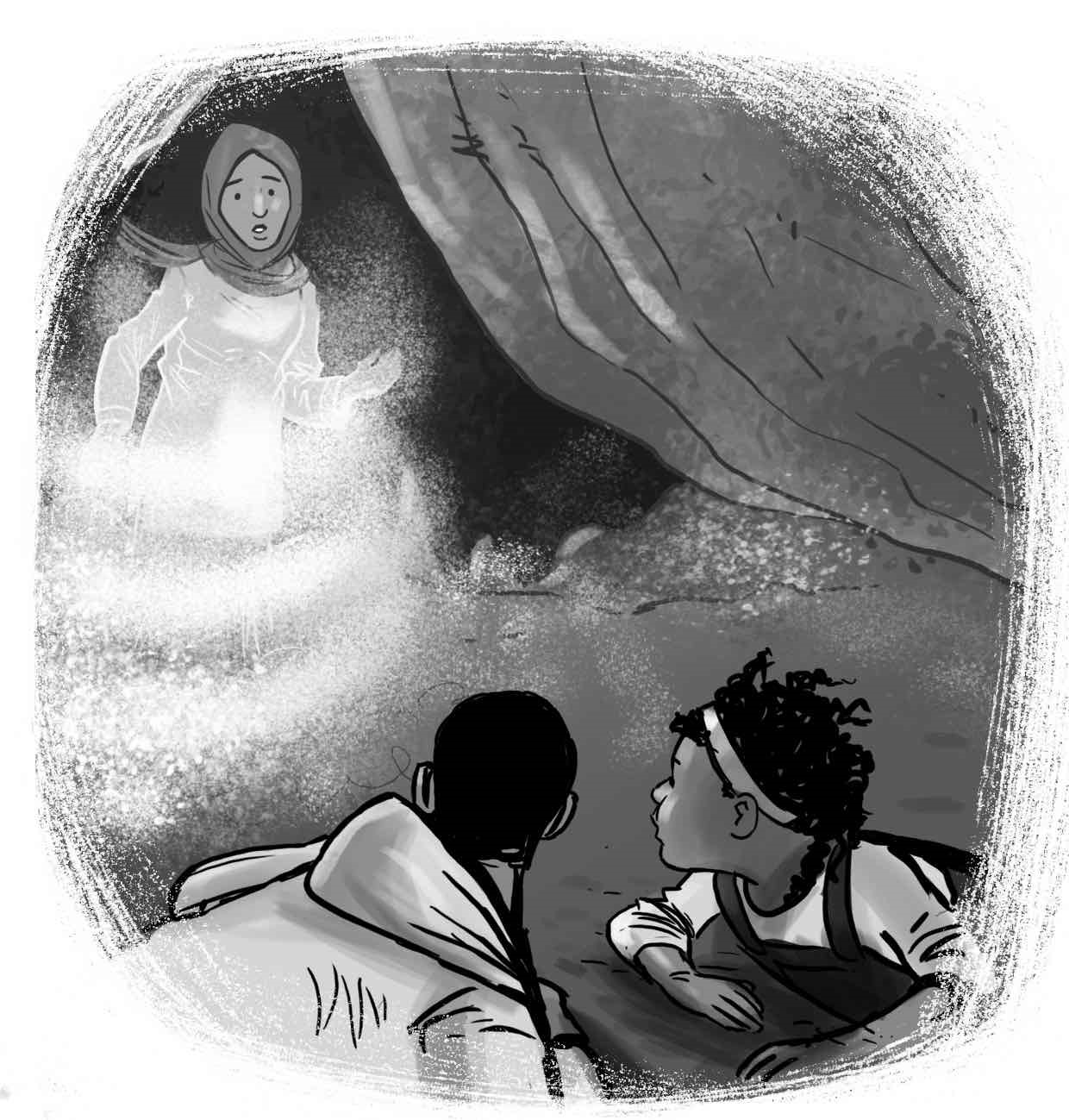