Say the name Hawking and it’s impossible not to think of science. Stephen Hawking has become the most instantly recognised and globally beloved scientist of our time, thanks in no small part to his global popular science bestseller A Brief History of Time. 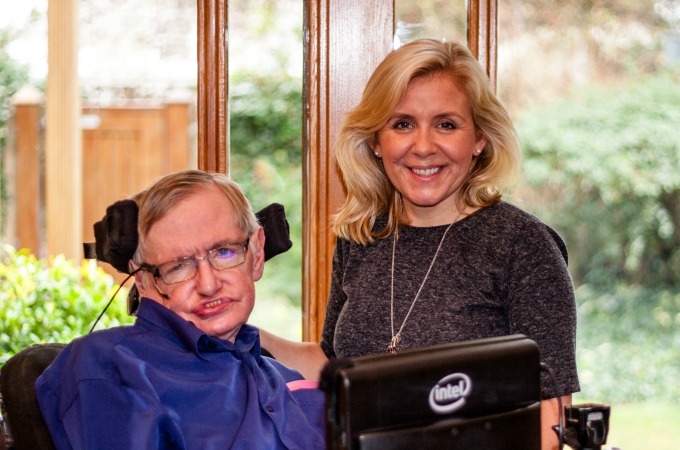 Stephen and Lucy Hawking, authors of George’s Secret Key to the Universe

Stephen’s daughter, Lucy, shares this desire to make science compelling and accessible, working with him for several years to create a series of rollicking adventure books for children. The multi-book tales of George and Annie take children on adventures across the cosmos, encountering everything from blue moons to the black holes Hawking is so famous for studying.

The Hawkings’ science adventure series has been translated into over 40 languages now, but it’s the latest additions that are proving so exciting to South Africans. In association with The Project for the Study of Alternative Education in South Africa (PRAESA), Jacana Publishers has added isiXhosa and isiZulu to the list of translations.

“Ideas can only spread as far as they can be understood,” commented PRAESA Director Dr Carole Bloch. “Lucy has done great work in making science thrilling and accessible for children. Thanks to translators, Xolisa Guzula and Phiwayinkosi Mbuyazi (isiZulu) these ideas can now reach so many more South African children, as it is only right they should.”

This October, Lucy Hawking was in South Africa promoting the book series in English, isiXhosa and isiZulu. “We’re very proud of this,” she said. “I grew up with storytelling as a family tradition on one side and science on the other side.”

“My father is an amazing science communicator – he has an extraordinary ability to speak in very simple terms about complex things. A young boy at my son’s birthday party once asked my father what would happen if he fell into a black hole. No-one knew quite how to answer that, but Dad simply said, ‘You’d turn into spaghetti.’ The adults were puzzled, but all the kids instantly got it! In that moment, I realised that this was the start of a story – and that we were ideally placed to write it. I could tell the story and my father could provide the scientific information. That’s how George’s Secret Key to the Universe – the first book in the series – was written.”

The Hawkings are no strangers to storytelling, being the subjects of the 2014 film The Theory of Everything, starring Eddie Redmayne. Now, though, it’s a different kind of narrative they are focused on.

The message in the children’s books? That science is fun and that anyone can understand it. “Don’t think science is something that belongs to other people,” Hawking exclaims.

Just how simple can you make award-winning scientific theory, though? “Not everything can be simplified, but we’ve tried to use the power of storytelling so that you have an experience,” Hawking observes. “Through having that, hopefully it makes an abstract concept easier to understand.”

Together, the father and daughter team have tackled storytelling around everything from robotics to the big bang, climate change to astronomy.

“I wanted to write these books as adventures stories because I believe that scientists view their work as an adventure, as thrilling journeys of discovery into the unknown in order to unlock the secrets of the universe,” said Lucy Hawking.

“Our children are going to have to make very big decisions about the planet in the future,” Lucy Hawking points out. “The sooner they start understanding that their opinions are worthwhile, the better. They’re starting on a journey they will continue all their lives.”

Stephen and Lucy Hawking’s George’s Secret Key to the Universe, is now available at Exclusive Books and other bookstores in English, isiZulu and isiXhosa.