A Q&A with the isiZulu translator of George’s Secret Key to the Universe, Phiwayinkosi Mbuyazi

Published in the Sunday World, Daily Dispatch, and Herald 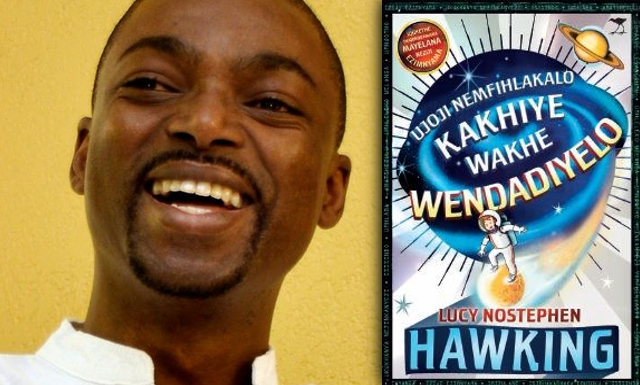 Phiwayinkosi Mbuyazi, the isiZulu translator of George’s Secret Key to the Universe

You have a background in electrical engineering, but have become an author and translator of science adventure books for children. That’s quite a shift! What makes you passionate about creating exciting and educational books for children, particularly in isiZulu?

It takes the better part of 10 years to arrive at a decent mastery of the English language. For indigenous mother tongue schoolchildren, this means the full enjoyment of English books is deferred till age 16. When English mother tongue students have been able to enjoy that resource privilege from a much earlier age, the situation amounts to information and knowledge apartheid.

A language both reflects and restricts the possibilities open to its users. It’s really telling that, in many cases, there were literally no isiZulu words for the things discussed in George’s Secret Key to the Universe – your translation project of Stephen Hawking and his daughter Lucy’s children’s science book. What kinds of words were missing? Were some of them surprising?

Neutron, neutron star, asteroid belt, Mercury, Pluto… to name but a few. I’ve known for quite some time that if you exclude the practice of prefixing every English noun with ‘i’ as in iquark, iwindi, etc, there are a lot of missing words in isiZulu for what have become our everyday objects in the 21st century. So, no, I was not surprised; in fact, that is part of the reason I felt I needed to do something about the situation by making new words! I’ve come to the conclusion that there are countless conversations that do not happen among indigenous language speakers simply because of a lack of vocabulary.

If you can’t even have that type of conversation, how can you decide to pursue a career in astrophysics?

What process do you follow to create new isiZulu words?

When I encounter a word I’m not sure about (in fact even one with which I have a slight hesitation!) I quickly consult my heftiest English-Zulu Dictionary. If the word is not there – or it’s not satisfactory for what I need – I begin the process of creating a new word.

In order to create new words I ask myself what does a word or object reminds me of or, if it does something, how does it do it? What does it sound like? Are there root words I can mash up to get me closer to something that will trigger the right intuition to a mother tongue speaker?

An example that I’m particularly fond of is the English word planet, for which the definition is ‘inkanyezi ezungeza ilanga’ which means ‘a star that goes around the sun’. Now, while I understand why they called it a ‘star’ (as everything twinkling in the night sky apart from the moon is a star in isiZulu), this wasn’t specific enough for George’s Secret Key to the Universe. So, my next step was to check out what the English dictionary definition is. In this case the Oxford English Dictionary proclaimed a planet to be ‘a celestial body which orbits a star in an elliptical orbit’. The problem is, I now had 5 more words I have to look up: celestial, body (in the sense it’s used here), star, elliptical, and orbit. But then, I happened to note that the English definition also states that the word ‘planet’ has Greek origins; ‘planeo’ in Greek means ‘wanderer’ as planets seemed to wandering around the sun. Now, that I could work with! isiZulu has a word for wandering, ‘ukuzula’, so I used that as the root of my new word for planet, which is ‘umzulane’.

You also created new isiZulu words for your own book, Ama YIPHENDLEYA. In fact, you left your job to focus on writing it – that’s commitment! Can you tell us a little about what it’s about?

It tells the story of how four South African teenagers – Kwethu, Jo, Scott and Bobo – who begin an adventure of discovery in the world of science and technology. With the help of their Uncle Mike, who’s an engineer, they form a club through which they begin dedicating their spare time to the learning how things work. They draw inspiration from real-life examples of innovators such as Trevor Baylis who, when confronted with the dire need for mass communications in Africa, went on to invent the wind-up radio. AMAYIPHENDLEYA – IsiQalo Sakho Konke is a story of how everyone can cultivate a dream and an innovative mind, and how even teenagers can begin taking the necessary baby steps toward making a difference in their own world.
Languages shift and change. Why is this important?

A language that remains static and does not adapt to changing times will eventually die. It is obviously exhilarating to be able to play a part, however small, in equipping minds to see further. But the opposition can also be extremely frustrating!