“We remembered blundering, in fog, into a nudist colony” – Terry Bell shares anecdotes from A hat, a kayak and dreams of Dar 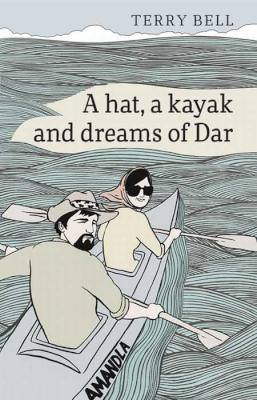 It was a book that was supposed to have been written as we travelled half a century ago. But all the notes and everything else we owned was lost, stolen in Madrid. That followed several months of great difficulty being stranded in Equatorial Guinea, being robbed at gunpoint in what was then Zaire and finally arriving in Ndola on Zambia’s Copperbelt, in what our contemporaries described as “an emaciated condition”.

It was a tumultuous time politically in the region and there was no thought of going back to a book I had tentatively dubbed: Paddle Dammit! This after the need for my partner and wife, Barbara, and I to paddle frantically to avoid collisions with ships coming upstream on the Rhone as we careered downstream.

Two years in Zambia were followed by time in Botswana and New Zealand, where a decade after we had paddled down the Thames in London, bound for Dar es Salaam, we were presented with an album of postcards sent by Barbara to her parents throughout our travels. With them came 11 tapes made on a portable reel-to-reel tape recorder during the latter part of our journeying.

There were no machines we could play them on and so they were stored with the postcard album – and we forgot about them. But we often talked about what we had done, the humorous moments and the difficulties. We were encouraged to write up the journey of both a hat and a kayak called Amandla.

I didn’t want to rely on fallible memory and thought that to write such a personal memoir would be self-indulgent. Authors John and Erica Platter disagreed and, encouraged, we took the postcards out of the album and discovered, on the backs, a diary of our journeying. All but one of the tapes were also transcribed onto CDs.

I realised we had an accurate record of where we had been, what we had done and when. Even what we had eaten. To write it up would be a break from the generally worrying areas of economics, politics and labour that I concentrate on; a lighter moment about a more hopeful time when everything seemed possible.

“How on earth do you cook, travelling in a kayak?” asked John Platter. Barbara set to, drawing up a selection of the recipes used for one-pot camping cuisine. We remembered the incidents of blundering, in fog, into a nudist colony; of the terror of our first experience with 250 ton barges; of the roar of the mistral wind and the calm, lovely canals.

It was therapeutic. And it underlined for us how liberating it had been and how hopeful the world had seemed as we blundered our way from swinging ’60s London through the waterways of France into the Mediterranean.

We learned much, lessons that still seem pertinent today. . .