And our sunshine noir author for January is … Chanette Paul! 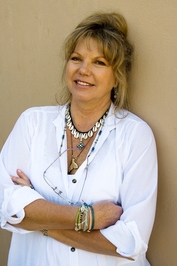 This month, the co-author of the popular Detective Kubu series, Michael Sears, had the opportunity to interview Chanette Paul for The Big Thrill – the magazine for international thriller writers.

Here’s what the two sunshine noir superstars chatted about:

Chanette Paul is one of South Africa’s most prolific Afrikaans authors, having written more than 40 books that span several subgenres. She was born in Johannesburg but has traveled widely, and lived in different parts of South Africa. She now lives in the Overberg on the bank of the Kleine River in the Cape, a spot not too different from the home of the protagonist, Caz Colijn, of Sacrificed, which was released last year in South Africa and the U.S. to critical acclaim. The New York Journal of Books said: “Sacrificed places Chanette Paul among the classiest thriller writers of our day.” High praise indeed for her first novel in English!

Sacrificed has a broad scope – starting in the Belgian Congo in the 1960s, it has ripples of murder and of rape of the rich resources of that country, spreading to South Africa and to Belgium itself. Caz lives a quiet, solitary life, having been rejected by her moralistic husband and family. Unexpectedly, she receives a call from Belgium to say that the woman she thought was her mother is dying, and wants to tell her the true story of her birth. Reluctantly, she goes to Belgium, where her family now lives, and learns that the people she thought were her parents were paid to bring her up by her real mother, who abandoned her at birth. But while Caz searches for the truth about her past, others are interested in her mother because of what she took with her from the Congo. The fact that Caz responds to the call starts a chain of intrigue which threatens all in her strange extended family.

What attracted you to writing novels, and when did you start writing seriously?

Stories have fascinated me ever since I can remember. I started writing stories when I was about eight. My first success was when I was 16, a fairy tale which was read on a children’s program on the radio. The second, in my final school year, was a short story about teenage love, published in a family magazine. My next story was rejected, and so were a few after that. I came to the conclusion that I had it wrong. I was, after all, not meant to be a writer.

It took me 20 years of doubting my abilities before I decided it was now make or break. In 1995, I took the proverbial bull by the horns. I wanted to write the sort of books I enjoy reading, stories that play out from A – Z, full of things happening to interesting people. So, novels were a natural choice. To test the waters I started off with a romance novel – probably to counter the rough seas of matrimony I had experienced at that time. It was published the next year and after that I couldn’t stop. I’ve experimented with many genres since then, but suspense novels and thrillers have been my drug of choice from 2007 onwards.

You have a big following in South Africa – over 40 published books – and have won a number of prizes, yet this is the first one of your books available in English. Was this book designed to appeal to a broader audience?

I was approached by a Belgian agent whose wife can read Afrikaans and loved my books. He asked me if I would consider writing a novel set in Belgium for possible publication in Dutch.

I agreed on the condition that my main characters would be South African as I thought it would be presumptuous to try to write from a Belgian point of view. Also, I had to take my South African readers into consideration as I write for them in the first place.

Much of the book takes place in Belgium and it’s clear that you know the country. Did you live there in preparation for writing Sacrificed, or was living there what gave you the idea for the theme?

This whole project was a huge challenge as previously I’d only been in Belgium for two days and that more than 20 years before. I realized I had to go there if I wanted the book to be authentic. So I took the prize money from an award I had just won, dug into my mortgage account, begged and borrowed elsewhere, and set off to Belgium for a month. By that time, I was petrified. I had no story, I’d never travelled alone overseas and I’m a nervous traveler even when accompanied.

I didn’t go there to find my story, but to absorb the country and its people so I can portray both to the best of my ability. All I knew more or less for sure was that it would be logical for the Belgian Congo to be the nodal point between South Africa and Belgium in my story.

I walked miles, sat at street cafes, drank local beers (and to my delight discovered kriekbier), ate Belgian food, and eavesdropped on as many conversations as possible. It helped a lot that my mom was Dutch. I can’t speak Dutch or Flemish, but I understand it well and read it quite fluently.

I had many lucky breaks. I had the privilege, for instance, to go to lunch with a history professor who had headed the commission of enquiry into Patrice Lumumba’s death, and he imparted not only a fountain of knowledge about the murder, but also about life in the Belgian Congo, how the country gained independence as well as the aftermath.

I also had the opportunity to visit the largest diamond bourse in Antwerp, where the then president of the bourse showed me a whole bag full of raw diamonds, let me touch and – I must admit – fondle them. Amongst other valuable information gained from him, he also explained the pipeline diamonds follow after they’ve been mined.

While there, I discovered so many things in Belgium that peaked my interest, that I couldn’t decide what to take and what to leave. It was only when I got back to South Africa that the story slowly started to crystalize. After Caz materialized, it became an organic process. I found my story as I wrote.