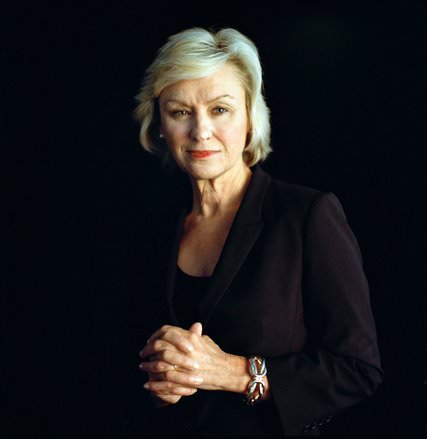 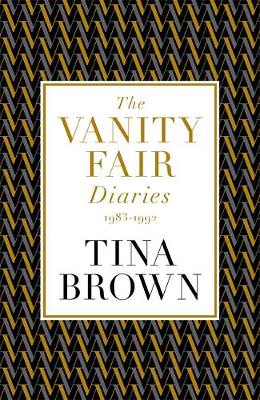 If you are of a certain age and a certain inclination – a lover of gloss and gossip and scandal, of witty writing and ace reportage – then you will know the name Tina Brown. For eight heady years in the ’80s she edited Vanity Fair and in the process she didn’t so much as raise the bar for magazines as lob it, blazing, into the stratosphere.

Even if you don’t know her name, you’ll remember her epochal covers: a ripely pregnant and naked Demi Moore, a platinum-wigged Joan Collins with the headline “She Rhymes With Rich”, Ronald Reagan giving Nancy a twirl and a sulky-looking Princess Diana under the banner “The Mouse That Roared.” That story in 1985 was an absolute scoop, the result of Brown’s own contacts in the UK. When she heard gossip of the parlous state of the Wales marriage she hopped on a plane from New York to London, wined, dined and whispered with impeccable sources and blew the lid on Charles and Diana’s rank unhappiness.

It was the first the world had ever heard of it.

She reported that Diana would ignore the family at Sandringham or Balmoral, cut off by her Sony Walkman, dancing to Dire Straits and Wham!; her murderous rages that were beginning to concern the Queen and Prince Philip, and the hours she spent studying her press clippings, “almost as if she’s trying to figure out the secret of her own mystique”. Charles, she said, had abandoned the image of Action Prince and was surrounding himself with “a motley band of mystics and self-sufficiency freaks”. We’ve long known the details of the unravelling of the Wales marriage, but it was Brown who originally blew the story. 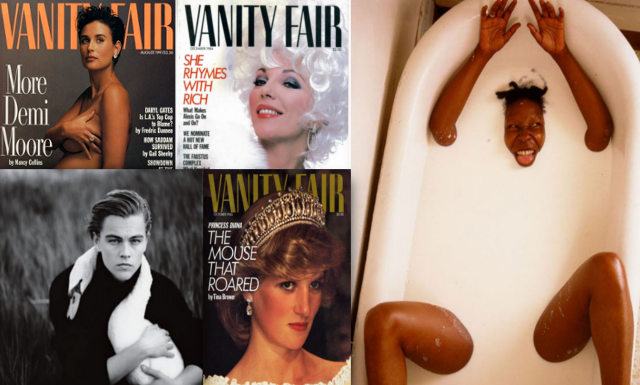 From Demi to Diana, Leo to Joan and Whoopi submerged in water – these are but a few iconic images associated with Vanity Fair during Brown’s reign as editor

Brown was herself, if not a dinkum blue blood, steeped in those circles. Her father was a film producer and she grew up in a country house where her parents entertained “rising starlets, operatic art directors, tragic comediennes, moody directors, on-the-make leading men and the odd literary lion … you could spot the latest James Bond or the star of a Carry On comedy lying contentedly inebriated under the Christmas tree.”

Brown’s father was always on the look out for a “cracking good yarn” to bring to the screen and the whole family would be required to mine the newspapers, books and scripts that piled up around the house. What better training for a future magazine editor? Brown was no blue stocking. She was expelled from three schools for subversive behaviour, such as organising a protest against the school’s policy of allowing a change of underwear only three times a week. She made it to Oxford, though, where she dated novelist Martin Amis and wrote for the newspaper Isis.

By the age of 25 she was editor-in chief of the once flagging Tatler, where she developed a witty, sassy editorial style, a clever alchemy of in-jokes and satire. Sales boomed and the magazine was bought by Condé Nast.

Cut to 1983 when she was transplanted to New York by Si Newhouse, the owner of Condé Nast, to advise on an ailing Vanity Fair. Within months she had been appointed editor, at the age of just 31. With a fat budget and that nose for a cracking good yarn, she launched like a highlighted missile into New York society, accompanied by her husband, the feted British newspaper editor Harold Evans. The Vanity Fair Diaries chronicles the next eight dizzying years as she both reflected and shaped the zeitgeist. She perfected her editorial mix of high and low culture, blending glitz with politics and serious reportage. A typical issue would include an exposé of Saddam Hussein, a scandal in the art world and a high-profile murder case, all stirred together with Hollywood lovelies and society soirées.

She paid her writers a fortune – $10000 is a lot of money for a feature even today – and put their bylines on the covers. When she was introduced to the recovering alcoholic Dominick Dunne at a dinner party, and he told her that he was going to sit through the trial of his daughter’s murderer, she begged him to write about it, thereby launching the career of one of her finest writers. When she heard the author William Styron speaking at a function about his depression, she had him signed up before the dessert plates were cleared; his article led him to write the definitive account of depression: Darkness Visible.

While Annie Leibowitz had long been taking photographs for Rolling Stone, Brown stole her away and pushed her to ever-increasing heights of creativity, demanding, and getting, superbly original pictures, like Whoopi Goldberg naked in a bath of milk, or Leonardo DiCaprio adorned by a swan.

Brown was not afraid to take risks. It was she who ran a shattering gallery of men in the creative industries who had died of Aids. This was the ’80s, after all, when Aids was the Illness That Dared Not Speak Its Name and her overt support was critical for the gay community.

The Diaries are full of the stories-behind-the-stories but also delicious gossip, such as her description of Jackie Onassis as a crazed and dim puppet: “It’s as if somebody jerks the strings, the body lurches to life, then she gradually sinks back into starry-eyed repose.”

She sits in a meeting with Michael Jackson in full makeup with his nose held together by Elastoplast, notes that wealthy Upper East Side matrons take off their earrings over dessert “as if to demonstrate the sheer weight of the rocks” and recounts a slightly cracked Warren Beatty making a pass at her.

Best of all, we meet the early Donald Trump who from the get-go she regarded as crass. A full year after Vanity Fair ran an unflattering piece about him, he emptied a glass of wine down the back of the writer Marie Brenner at a black-tie function. Brenner looked up to see “his familiar Elvis coif making off across the Crystal Room.”

All immensely entertaining, but what saves the book from merely being a fluffy, smug gabfest is Brown’s honest wrestling with work and motherhood, especially as it becomes clear to her, and the reader, that her son George has special needs. He was born two months premature and she has never stopped asking herself whether it was her drivenness, her refusal to rest, that caused it. He was eventually diagnosed with Asperger’s. One diary entry notes: “The weekend was hard, with G being very difficult and Harry chained to his computer as bloody always. Two workaholics don’t make a rightaholic, particularly when it comes to raising kids.”

She confesses to wrong decisions, to failed experiments, to doubts and confidence crises and to routinely reducing nannies to tears. She’s constantly purging whingers and underperformers from her staff. She couldn’t have been an easy boss, but once again circulation soared: from 200000 to 1.2 million.

As the ’80s morphed into the more serious ’90s, Brown became restless and set her sights on the venerable New Yorker. Needless to say, she lobbed a few grenades into that mix, before being lured away by none other than Harvey Weinstein to launch the disastrous Talk magazine. From there she founded The Daily Beast website and now runs the annual Women in the World Summit, where she pulls in such participants as Hillary Clinton, Chimamanda Ngozi Adichie and actress Scarlett Johannson. The Queen of Buzz is now a Commander of the Order of the British Empire.

Recently Brown was interviewed about the #MeToo movement. She fixed the interviewer with her famous steel-blue stare and said: “The way to keep sexual harassment at bay is to be the one in charge.”

And if that’s not a clarion call to women in the media, I don’t know what is.

« Book Bites: 21 January
Mike Procter’s autobiography a witty, concise read on the events that shaped his life after his storied career as a player, writes Khanyiso Tshwaku »