Mike Procter’s autobiography a witty, concise read on the events that shaped his life after his storied career as a player, writes Khanyiso Tshwaku 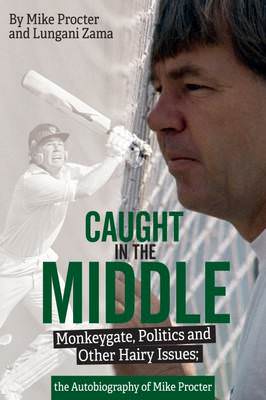 The title of Mike Procter’s autobiography Caught in the Middle is an apt one considering he found himself at the centre of two of cricket’s hairiest moments in the mid-2000s. Those events were the “ball tampering” Oval 2006 test match between Pakistan and England and the infamous “Monkeygate” New Year’s test between Australia and India in Sydney in 2008.

On both occasions, he was the match referee. After those acrimonious tests, the International Cricket Council changed the rules to ensure certain infractions were dealt with at a level higher than that of a match referee.

In the 2006 encounter, the Pakistan team led by Inzamam-ul-Haq refused to come out after tea on the fourth day after being accused by the abrasive and controversial Australian umpire Darrell Hair of altering the condition of the match ball.

The 2008 issue centred around Indian offspinner Harbhajan Singh racially abusing Australian all-rounder Andrew Symonds, who is of West Indian descent, by calling him a monkey.

These two moments are the centre of the well-crafted 239-page book, which focuses on Procter’s career as referee rather than player.

Procter said the incidents in London and Sydney changed his outlook on the game.

“The Darrell Hair thing was part and parcel of cricket. It was very unusual but that’s something you’d expect to see in cricket once in a while, but the Harbhajan Singh one, I would’ve preferred not to deal with that one,” Procter said.

It’s a book that can be devoured easily, thanks to Lungani Zama’s brevity and Procter’s witty but concise tone. With this book being Procter’s third, it was a smart move to speak less about his storied career as a player – cut short by anti-apartheid sanctions – and focus more on the events that shaped his life afterwards.

It’s worth remembering he was South African cricket’s first post-isolation coach, from 1991 to 1994, a tenure that included the five-run win over Australia in Sydney in 1994. – Khanyiso Tshwaku @kaymorizm