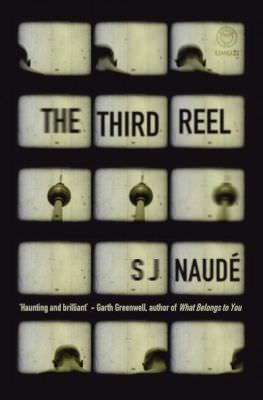 There is a single prop in the middle of the stage: a huge grey-green sound recorder. A mute piece of equipment from some government office or other, built – so it seems – to withstand a nuclear war.

Christof – “our technical boffin”, as Frederick refers to him – tracked it down somewhere in Berlin and had it delivered.

They look at each other. Then the three gazes settle on Etienne. He isn’t sure what he should read into them. A plea? A threat? How does it happen that the three of them always simultaneously make the same demands? And that – this he is only realising now – a collective chill can emanate from them as suddenly as collective warmth?

Smoke is pumped out of the machines, enfolds the instruments. The four of them jump light-footedly onto the stage, one by one. Screams rise from the crowd. While they saunter to their positions, the huge sound recorder’s two reels start turning, magnetic tape tautened between them. Loud, declamatory male voices can be heard: speeches by the East and West German politicians interrupting each other, talking over each other until it becomes sheer cacophony. No single voice can any longer be distinguished from the others. Etienne enters with an extended drum roll, foot on the drum hammer’s pedal. Sparks fly when he rubs steel files over each other. Frederick emerges from the smoke behind the synthesiser: an ominous note is growing, a siren straight from hell.

They play. Play. As none of the echo-bands can.

They recycle noise from the void. It merges with the sounds of cars on highways, tractor engines and power plants’ furnaces. New noise ensues, killing old noise. And then it starts all over again. They have to let go of everything – extinguish everything – that preceded the noise. There is no longer any history, nor any future. No bodies and no consciousness. Everything is sound.

The surging crowd grinds the tomato field to a pulp. Stunde Null play ‘God’s Idiots’. They play ‘The Language of Men and Machines’. There is a moment of silence; the eclipse begins.

The four of them look at each other, then start playing ‘Sonnenfinsternis’. The moon punches a hole right through the sun. Below them everybody is going into a frenzy. A black cloud shifts over the whole of Germany, making everyone deaf.

The evening air lays a lulling hand on Etienne’s forehead. But it isn’t evening; it is afternoon. They are playing to drain the sun of its warmth. At the height of the solar eclipse they keep an impossibly long and cold note. Vibration from the blood. Then they let go. They chase the moon off, bring back the light.

Etienne sees only one face in the twilight crowd: Axel’s. Around him, people are rising and falling, as if under a vast sheet. Axel isn’t wearing any sunglasses, is looking at Etienne with naked eyes. Etienne plays his drums for the tree resin dripping from Axel’s back, for the childlike scribblings on his skin. For how small he looks underneath the German sky.

Around Axel, dozens of people have stripped their clothes off. Ready to follow the music’s commands, to march straight into the flames.

It takes a while before Etienne realises he is the only one still hitting the drums. The other three are watching him in silence. Somewhere they have lost each other. They know he is now playing for Axel only.

The crowd has been wounded, Etienne thinks as he touches his painful erection. They are covered in blood and slimy scraps of flesh. Like a scene of mass surgery – an open-air operation room, patients who start wandering when the anaesthetic fails. But what is actually clinging to them, is tomato pulp.

His three friends’ eyes have become cold. They no longer know him. Etienne looks out over the heads, finds Axel’s face.

The lyrics of the last two lines of ‘Sonnenfinsternis’ linger on “Everybody knows this is Nowhere/Follow the fire and it will guide you home.”

« “There’s a social justice agenda that gets and keeps me passionate about this work” – a Q&A with Lara Krause, language activist and PhD researcher into mother tongue education
Abantu Book Festival is calling for donations »