Lesego Rampolokeng is a poet, word performer, and the author of 12 books, including two plays and three novels. He has collaborated with visual artists, playwrights, film-makers, theatre and opera producers, and musicians. His no-holds-barred style, radical political aesthetic and instantly recognisable voice have brought him a unique place in South African literature. 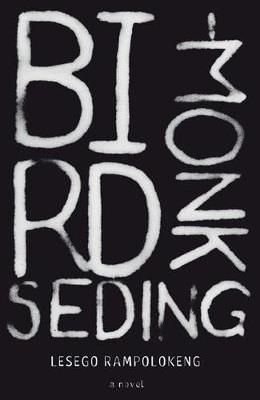 The gathered, sweating, angry-to-trembling Afrikaners in the dusty street want it to have been an attempt at rape. An assault on their grasping at white nationhood. The hands are on the guns. The trucks roar, eager to grab whoever it was. Old woman speaking, the one who lives in the house opposite, with her Parkinson’s-diseased geriatric husband who can only hobble a quarter step at a time from the door to the gate, and her divorced, middle-aged, bulimic daughter. She speaks fast, her squeaky vice trying to rise above the deep-throat growls of the trucks and their old-republic-clad occupants. She prattles fast about how i am a good person, i live in that little house behind the trees, i help out… and it is to not have them turn their murder-intent and fire attention on me… Yes, they gathered in, wanting it to have been an attempt at despoiling this white woman.

And the victim… she struts, the attention bringing a little colour, in vain, to her face. She is walking off her soles, bouncing, glad. She looks like crumpled khaki, like brown paper wrapper out in the elements too long. Like she has been through storms, wind, dust then drain-water drenched and cast out in the driving sun. Pink blotched some kind of symmetry across the face. Deep lined, the visage. Trenches cutting in and across. Thin to the bone, you can see the bones sticking out on both shoulders, desperately holding her shirt up. She bathes in the harsh light of her victimhood. For a change because always when she walks past, the boers look at her. Surreptitiously, the grimaces forming, and steal their glances away, never staring.

She is no boeremeisie to hold up in pride of the Van Riebeeck and oom Paul Kruger old tradition. She hustles all – black, white – for money in the street. The pale skin peeling off her face. She collects and sells scrap metal across the freeway and…you need not be told but you can see the drug-hunger. The craze behind the skinless eyes.

This day her two children, 6 and 8, ran screaming down the dirt-street and cries filled the air. I ran out. And heard through the trees bordering our properties my AWB neighbour furiously saying, loud-voiced – i later learned it was into her telephone – ‘kom gou…kom gou’ and blabbering incoherently, other things. By the time i got to the gate there were three trucks and a couple of cars gathered in the street, guns on show. A police car arrives, and the police are bored, one yawning. It is Monday morning.

They don’t believe this rape story. The AWB neighbour, predatory, like the smell of blood was in the air and the wounded close by, was wafting and floating around, holding centre-court.

« Book Bites: 3 June
“I wanted more scope for her … more focus on her virtues and flaws.” Madeline Miller discusses Circe with Diane Awerbuck »