Read an extract from Francois Smith’s The Camp Whore, shortlisted for the Barry Ronge Fiction Prize 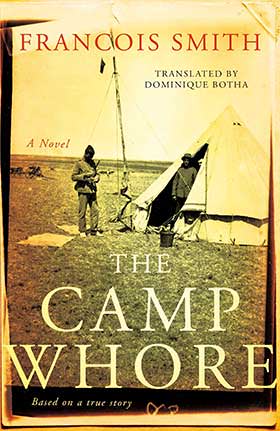 Rock. Above me and around me. I am in a cave, I know that now. On the rockface eland are leaping over me, and between them are little black men with knobkerries in their hands. I also know what that is.

On Bosrand there was a cave with Bushman paintings. Yes, Bosrand. Now things are coming back to me. Pa had shown us. Pa. Ma. Neels. Me.

There was also a face in front of me. I remember now. And the shock. He sat on his haunches next to me, and I saw the grains of sand on his pants and on his hand. Then I saw that the hand was black. I closed my eyes. Shut them. Later on, I again tried to work out where I was but all I could see were these mud clouds and the only thing that existed was this terrible fear.

It’s like rocks tumbling down a mountain from up high. It is a sound that I know. I understand what he is saying. Kgotso, Mofumahat-sana, he says. That is how they greet one. The good ones, that is their greeting. But he just wants me to believe that he is one of the good ones, what he really wants is a white woman to do with as he pleases.

I can see him clearly now. He sits with his knees pulled up and holds a knobkerrie between his legs. His head is turned away, but I know he is watching from the corner of his eye. Metsi. That is what I need to say. Water. I want water. He must give me water, that is all I want, and then I can die. He must just kill me quickly so that I cannot see or feel what he is doing.

He puts the knobkerrie down and stands up. I’m scared half to death. But all he does is dip his hand into a calabash next to me – I’ve only just noticed it – and brings his hand to my mouth. Cupped.

I stick out my tongue and can at least taste the water. He lets it drip. I try to swallow, but my tongue won’t move. Luckily, more comes, and then more. The water is bitter, tasting of leaves, something like aloe or sage. My whole face is wet, and so are my chin and throat.

There is something wrapped around my head, I can feel that now. Why am I lying here under a blanket? Am I naked? What has the herdsman done to me? What is he going to do to me?

O mang? That is what I should say. Who are you? But the words refuse to come out. I can’t speak. Like Ma, when she tried to pray but couldn’t find the words and stretched her hands out towards me. Lord, watch over us, and let your light shine upon us.

My lips crack when I try to open my mouth. Only prayer will prevent darkness from descending on the land. I am Alpha and Omega, the beginning and the end, sayeth the Lord. There is a priest sticking his hands up in the air, straight as an arrow up at the clouds and he looks down at me, and I look away from his terrible face, away from his eyes glaring at me like a glowing furnace, seeing only evil and wretchedness. Where is that herdsman who is always sitting here, next to me, where is he? His name is Tiisetso. He doesn’t call me nooi. But then he looks away and says ke sôno. It’s a great pity, he says. He says I must sleep again so that I can become strong again. He says I was hurt badly at Balla Bosiu. With his knobkerrie he pounds the ground between his feet.

Balla Bosiu. The camp. The place where they weep at night, that is what they call it. That I do remember. The camp. That is where I have come from. I know that now. But if I close my eyes and think, then all that comes to mind is the feel of a sheep’s hoof in my hand, how hard the bone is under the skin, and the prickly wool, and the kick that jerks my arm right up my shoulder. Then I see someone pull back the head and swiftly draw a blade across the throat and cut, cut, cut as the blood bubbles and the windpipe bursts, and I cannot look away even though I want to and the man who is slaughtering looks at me, his nose is thin and skew and his lips are dry and the same colour as his skin, not red, and he says something to me, but I cannot hear what he is saying.

« Emerging translator? Then this contest is for you!
#cocreatePOETICA – celebrating identity, culture and history through the spoken word »