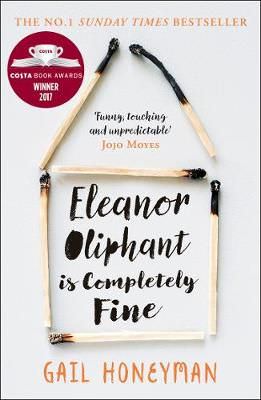 Now available in paperback, Eleanor Oliphant is Completely Fine has performed astonishingly well on the bestseller lists, and recently won the Costa Award for a debut novel. And for good reason. Miss Eleanor Oliphant lives an ordinary, if slightly odd, life. Written as a first-person narrative, Eleanor is about to turn 30, lives in a flat in Glasgow and works as an accounts clerk.

She’s someone we all know; she rarely interacts with her colleagues, thinks and speaks with a terribly stiff formality, and sees the world in completely different ways. Eleanor is also routine bound. She works quietly all week, eats the same food. On Friday nights she buys herself a frozen pizza and two bottles of vodka, and avoids the world until Monday morning, when she goes back to work and begins the week again. Not much of a life, really.

It takes a little while to figure Eleanor out – she embodies what has become a standard unreliable narrator (think The Girl on the Train, and then banish the thought entirely). Just when you think you’ve got a grip on her, you realise she’s not the unreliable character you’ve taken her for at all. What reads as eccentricity is in truth Eleanor’s detachment from society, and her slight bewilderment at how other people live. And her detachment is in fact rooted in a loneliness and isolation that’s no fault of her own.

An encounter with Raymond, the IT fellow from her office, and the unfolding of human interactions that arise from this encounter, points the way to the core of Gail Honeyman’s superb novel – kindness. Small acts of human kindness; unthinking, unconditional kindness and the micro-interactions – human touch, thoughtfulness – that make modern life bearable.

Eleanor’s story is about mental illness and isolation, but it is about heart – and it’s also funny and touching without being sappy. Eleanor Oliphant will stay with you for a long time. Russell Clarke @russrussy