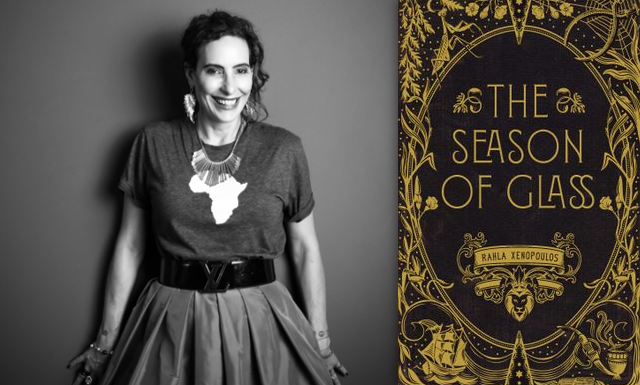 It is difficult to believe that we have Chanel lipstick and the TV series American Horror Story to thank for the epic novel, The Season of Glass, but life works in mysterious ways. Xenopoulos first refused to watch the series, but her best friend bribed her to do so – with lipsticks.

As Xenopoulos white-knuckled her way through, she was fascinated by the way the series recycles settings, themes, and unfinished business, which returns until properly resolved. This re-emergence left her pondering reincarnation. She explains: “The first rule of physics is that nothing can completely disappear. Everything becomes something else, so then what happens to a person, who lives and loves and learns and walks this earth interacting with other souls?”

What emerged from the television experience is Xenopoulos’s finest novel yet. Two souls are sent to Earth in the form of Jewish twins with the potential to change the world. The boy and girl appear in the cruellest of times, and it is humanity’s actions that dictate whether they will succeed. While the twins are drastically different people in each new life, their souls remain the same: the boy a grounded protector, the girl possessing every story ever told in the past, present and future.

Declared a “modern Scheherazade’s tale”, the story spans the ages from ancient Ethiopia to the Spanish Inquisition, to the brink of Austria on the eve of World War II, to times we have yet to live. There are pirates, warrior princesses, rabbis, artists, and monstrous giant mantises. Each section is a new story.

Every section displays humanity at its worst, while still filled with hope. “Perhaps the greatest goal a writer can have is that their work brings hope and love,” Xenopoulos says.

She explains: “All ages are cruel. What’s different about this age is that things are happening exponentially faster, and there are no filters, it’s all thrown in our faces. That’s why I think faith and spirituality are so important, and why we have to take breaks from the screens to smell the roses, listen to music, read a book, hold someone’s hand. We need to detach ourselves from the chaos and take stock. What’s important is kindness, and laughter, and how we treat our neighbour.”

Unsurprisingly, The Season of Glass required an enormous amount of research to write. What some may not realise, however, is that this was necessary even for the section that is set in the future. “Science fiction can seem so outlandish,” Xenopoulos says, “the reality is that these things have and are coming to pass.”

Throughout the story, love and physical human connections are shown to be vital to our humanity. Not an easy balance to achieve at the same time as existing on social media, Xenopoulos admits, as she herself used Facebook to help guide her through the research. But she is adamant we must continue to seek out the good in each other and in ourselves, and that cannot be accomplished if we don’t step away from screens. This theme is what ties the story together, at the end.

She explains: “If we’d been alive during the 14th century the headline of every newspaper, if they had had newspapers, would have been about war and a tyrant. But the important thing happening was in a small town in Germany where a man called Johannes Gutenberg was developing the printing press. People create war, we use religion the way we use money and other resources as an excuse to fight, but that isn’t all we are doing. There are crazy, exciting and beautiful things going on out there.”

Winter can be hard on many. The Season of Glass is a wonderful way to return warmth to your soul. @ms_tiahmarie

« Book Bites: 1 July
An imagined extension of a real past makes for a riveting novel, writes William Saunderson-Meyer of Anton Svensson’s The Sons »