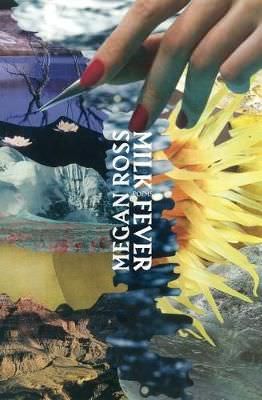 Milk Fever is published by uHlanga Press, a name which has been doing remarkable things in the South African poetry scene of late. They are responsible for bringing to the world Koleka Putuma’s Collective Amnesia, a book which is breaking records in the South African poetry publishing game. Alongside Putuma, uHlanga have an impressive roster of poets including Genna Gardini, Douglas Reid Skinner, Francine Simone and Nick Mulgrew. Amongst these bright lights of the South African poetry scene, Megan Ross’s flame does not dim. Her work is mature and confident, despite this being her debut collection, and her growth as a poet is something we should look on with optimism.

It is almost a backhanded compliment in some ways to write of a woman poet that her work is Plathian. Whilst Sylvia Plath was a brilliant writer of verse, it can be a cliched and reductive comparison.

I do think Ross is Plathian, not because she is a woman writing about the deeply personal with a great degree of angst (which she is), but rather because the two both have a similar gift for effective, hard hitting imagery, and a knack for making the personal universal; for connecting the things that happen to us as individuals with the great big cogs of history, science, culture and language.

“At night when it is the city’s turn to light the sky,
She dreams of creation splitting open under teacher’s pen,
Ink-spliced parts dictated by biology, geography, mathematics, cosmology.
(as if time really is an endpoint a corporeal destination as if seas really do part)”

It is a testament to the immense confidence that Ross has as a young writer to open with a poem that is so confrontational.

In it Ross lays down a challenge both to society in general (“even without sons we still are…”), and to language and poetry in particular: “punctuate us if you dare”. It reads like the voice of a woman claiming space for herself in a space which is yet to fully understand or accept her. In it the poem itself becomes a metaphor for an inadequate world in which, despite its inadequacies, one still wants to live.

Ross is trying to write herself both into and out of language and history. This ironic tension gives the poem its power, and lays down the themes of futility intermingled with hope that dominates this collection.

The groundwork for the collection’s focal imagery and symbolism is laid in the first few pages. Imagery and symbolism which is, arguably, exploded as it progresses. The middle part of this book is kaleidoscopic, as Ross fiddles with (nay, ratchets) form and meaning, diction and syntax, until the very fabric of the universe starts to come apart at the seams. For instance:

Ross’s allusions and associations are strange, yet they are held together by an imagistic vocabulary that develops as the book proceeds. Images of dryness, wetness, bodily fluids, flowers, blades and a host more are developed and re-used and re-contextualised as the book goes on. The effect is surrealist stream of consciousness that somehow retains a sense of central logic.

These images and themes are used as vehicles to confront a range of topics, of which young motherhood is but one. Old relationships, platonic and otherwise, familial bonds, love, death, self-harm… these are all dealt with in this book, and it would be a crime to ignore all of these things in favour of the book’s supposed selling point, that is, a book about young motherhood.

Ross’s diction can be deceptively simple, and to truly do it justice would require several readings. Here, in the belly, Ross masterfully weaves a web of interconnected images and allusions which connect like strings on a conspiracy theorist’s pin board. It would take far too much time to break it all down here.

One simply has to dive in and trust that one will emerge unscathed on the other side. Or not. I don’t think unscathed is what you want to be when you emerge at the end of this collection, and I doubt that anyone actually would.

Ross manages to take us a fair distance from the shore in this collection, and the effect can be disconcerting. However, she does a good job of reeling us back in whilst doing minimal damage to the integrity of our psyches.

Whilst the middle of the book has a quality of formic dissonance to it, the end resolves like a melody settling on the first note of the scale. There are some truly memorable lines here, like, “In the drying there is life”, and “I know genesis has its place”, both from subsections of “Love in the Year of Bleeding”.

Both go a long way to heal the wounds inflicted by the beginning and middle. Dryness is synonymous with death in most of the book; the dryness of ageing, of the vast salt plains of youth we mistook for flavour but which ultimately drain us of our vitality; but here she offers us hope.

The same goes for “I know genesis has its place”, a deceptively simple, almost tautological line that alludes to the genesis of the bible, but also to genesis as a kind of change; change which can be violent but ultimately necessary and productive.

Admittedly, sometimes, Ross’s lines can get caught up in themselves, and some may find in this collection the kind of baffling deliberate opaqueness that makes much modernist and post-modernist poetry inaccessible. There are certainly instances of lines falling flat, or syntactic structures that repeat themselves just once too often, breaking the spell (“refrigerator eggs stained to teeth and bone” is one such syntactic device).

Overall, however, I think one would be remiss to sleep on this collection. Dive in, get lost, find yourself, and don’t for a second try to punctuate any of it.