“If I had known what I was getting myself into, I would probably never have begun.” Simone Haysom on writing The Last Words of Rowan du Preez 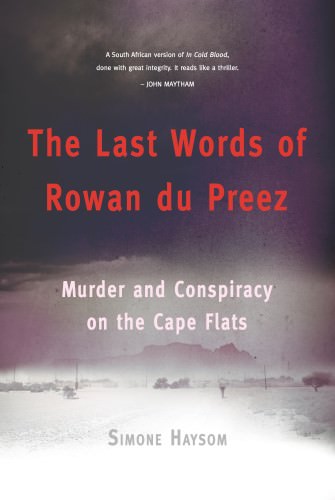 Towards the end of 2013 a friend came to me and said: “I’ve just returned from Cape Town and the craziest things have been happening to a friend of mine.” I had recently moved back to SA after several years studying and working abroad and I was looking for a story, something that could help me understand the baffling, violent country I loved.

This turned out to be it.

The woman he was talking about was Angy Peter, and she was accused of necklacing a young man, Rowan du Preez, who she had been trying to rehabilitate from a life of crime. Angy, a criminal justice activist involved in a campaign to fix the dire state of policing in Khayelitsha, claimed she was innocent. She had been set up, she said, by a policeman she had accused of corruption, and a police force that considered her an enemy had gone along with it.

But the state had, on the face of things, a strong case: eyewitnesses to the assault, and a declaration supposedly made by Rowan himself – to three policemen – as he lay dying.

I spent the next five years researching and writing the story: attending the Khayelitsha Commission of Inquiry, Angy Peter’s trial, and asking questions in Mfuleni, where the murder took place, poring over transcripts and chasing leads that often didn’t work out.

The story turned out to be as much about the toll that impunity – at high levels and low – has taken on our society, as it was about these specific events.

Sometimes the degree to which the truth refused to be pinned down was so extreme it became absurd. At one point in the trial, during a cross-examination of a witness who was being infuriatingly evasive, the defence advocate asked him: “What do you think the motive for the murder was?”

So intent on dodging questions was he, he replied: “Which murder?”

“This one!” bellowed the advocate, and I thought for a second he might be about to commit another.

If I had known what I was getting myself into, I would probably never have begun. In a story like this, your head can get done in, both by what you don’t find out and what you do.

Working through hundreds of pages of eyewitness and medical testimony on a necklacing begins to take a toll. You tell yourself it’ll be worth it when you find the truth, but that’s elusive. Though I was able to find out far more than the official story, my limitations to getting to the heart of what happened caused me angst.

You can’t get all the access you need: the story is shaped by the gaps you get through. @simonehaysom

« In Siphiwe Gloria Ndlovu’s debut novel there is no distinction between the real and the magical, writes Kate Sidley
“Children need to be encouraged from an early age to learn another language or languages” – a Q&A with academic and language activist, Zakeera Docrat »