Liquid lunches, labouring over finding the right authors, and an objective to explore the lives of a remarkably varied set of people – Bill Nasson on co-editing Illuminating Lives 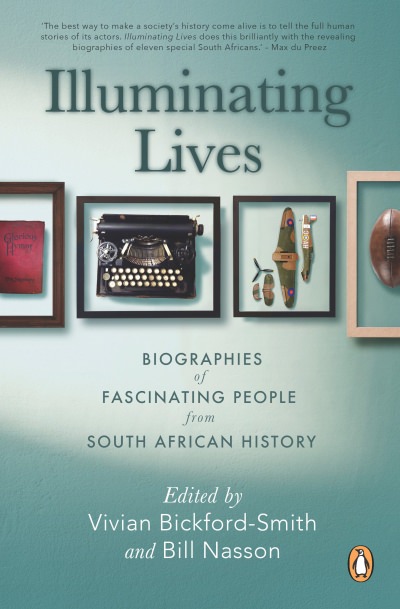 Now both ageing and growing grumpy, my fellow book editor Vivian Bickford-Smith and I had been feeling for some time that it would be a good idea to try something different in the field of South African biographical writing.

Avoiding the packed gallery of this country’s usual suspects – either worthy or dubious political figures – we decided to create a collection of fresh and attractively-written short biographies that would portray the rich and complicated South African lives of a dozen or so local men and women.

Having a go at a book which is a collection of pieces by a range of authors means that you have to start by taking a deep breath. Getting the whole thing done depends on the speed of the slowest tortoise.

Some contributors may write too much, while others may write too little. There is also the risk of writers changing their minds and handing you something you hadn’t been promised.

Pulling it all off needs a lot of planning.

We did this over numerous liquid lunches in a Cape Town bistro which has now closed down, possibly to save what was left of its wine stock.

We took our inspiration from the crusty old English historian GM Young, who suggested over 70 years ago that “the best record of a nation’s past that any civilisation can hope to produce is the biography or memoir of an individual’s life”.

In history, what mattered most is not what happened, but how people experienced it personally, and how they felt about the changing circumstances in which they found themselves.

With that settled, we had to choose whose stories we wanted to be told, and to find the right authors for interesting biographies. In the end, rather than try to act as an amateur dating agency, we decided to do it back-to-front.

We first hooked a distinguished group of writers to craft the collection of biographical essays which make up Illuminating Lives, and then asked each of them to select an individual whose story they would like to tell.

We had in mind an assortment of people as our subjects, some known, others virtually forgotten, and yet others unearthed and brought to life through brief biographies. Even the most ordinary among them would have some streak or other which was extraordinary. And in having their personal life stories illuminated, their often moving experiences would in turn illuminate the different South African worlds within which they moved.

What we wanted were memorable portraits to capture the imagination of readers, almost to visualise a vivid moment of a life captured on a potent page.

It might be the Xhosa Presbyterian missionary evangelist Tiyo Soga landing in Port Elizabeth in 1857 with his Scottish wife, Janet. Or the African landscape artist JK Mohl turning up with a painting for Princess Elizabeth during the 1947 Royal Tour. Or Jane Turner, mother of murdered anti-apartheid activist Rick Turner, running a tea garden on the Stellenbosch farm that she owned and managed in the ’50s.

As these examples show, our objective is to explore the lives of a remarkably varied set of people, coping with existence and livelihoods in both a distant and a more recent past. As we put a premium on variety, the individuals upon whom light would be thrown include a colonial administrator, a pilot, a teacher, a cricketer and a poet. Our authors also reflect variety – historians, journalists and novelists. South Africa needs the freedom of flowers. If not a thousand, may 11 bloom here as chapters of Illuminating Lives.

« Holly Ringland’s debut novel is a carefully woven coming-of-age story, writes Jennifer Platt
“Having the luxury of reading for pleasure is something we’d like everyone to have” – a Q&A with Open Book School Library Project facilitator, Frankie Murrey »