“Fame went to my balls.” Eric Idle’s ‘sortabiography’ is funny, clever and moving – but watch out for earworms, writes Michele Magwood 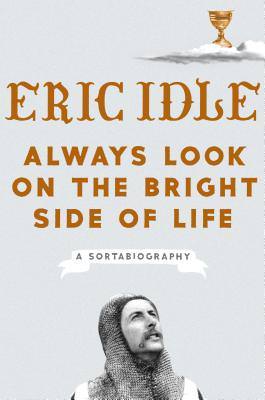 Always Look on the Bright Side of Life ****
Eric Idle, Weidenfeld & Nicolson, R330

“I honestly think there are more hours of documentary about Python than there are hours of Python,” writes Eric Idle. “So, to the mass of mangled memories do I now add my own muddled, prejudiced, and deeply cynical account of what I think might have happened? Of course.”

In what he calls a “sortabiography”, Idle looks back over his 75 years, beginning with his dreadful childhood and ending with his comfortable life in California now, with a great many mad antics in between.

The book should come with a warning sticker: beware earworms.

If one of the best ways to appreciate life is to have had an unhappy childhood, he says, then he was very fortunate.

He was just three when his father was killed. Having survived the war as a rear gunner on a bomber, Ernest Idle was killed in a road accident hitching home for Christmas after being demobbed.

Idle’s mother sank into a depression and he was looked after by his grandparents. Then, when he was seven, he was sent away to a Dickensian school for orphans.

Beaten and bullied for 12 years, he developed a sharp tongue and an ever sharper sense of the ridiculous.

“Humour is a good defence against bullying. It’s hard to hit a smaller boy when you are laughing.”

It was a scholarship to Cambridge that saved Idle’s life. It was there he started writing comedy sketches and joined the famed Footlights Club. It was a springboard to what would eventually become Monty Python’s Flying Circus.

“George Harrison once said to me, ‘If we’d known we were going to be the Beatles we would have tried harder.’ I think the same could be said of Monty Python. How on Earth could we possibly know we would become them?”

There is much about the early days of Python that will delight fans, such as the genesis of some of their best-loved sketches. Idle wrote the “Nudge nudge” routine when he was barely out of university and it is said that Elvis loved it so much he called everyone “squire”.

The character of Brian from The Life of Brian was originally going to be the 13th disciple.

“He was given the job of trying to book a table for the Last Supper: ‘No we can’t do a table for thirteen. I can give you one of six, and then another for seven over by the window.’”

The film would never have been made were it not for ex-Beatle Harrison footing the bill. Asked why he had mortgaged his baronial home to finance the film, he said: “Because I wanted to see the movie.”

Idle name-drops with a front-end loader in this memoir: partying with Paul Simon, Andy Warhol, Billy Connolly, Prince Charles, Keith Moon, but you forgive him for it because it’s always such a hoot. He had very close friendships with Harrison and Robin Williams, and his notes on their passing are deeply moving.

Idle might have scores to settle – he hints at a few of them – but he’s not doing it here. Instead this is an account of a life very well lived.

He fesses up to some pretty bad behaviour in the early years – “In my case, fame went to my balls” – and his chronic infidelity led to the collapse of his first marriage. He’s been married to his second wife, Tania, for 41 years now and is a devoted father.

What strikes the reader is how hard he has worked, and still does. Even now he is busy writing the film version of his hit musical Spamalot.

He comes across as a genial, still mischievous old cove, and this book is nothing like the “muddled, prejudiced, and deeply cynical account of what I think might have happened” he promises.

He may have written the immortal lines “Life’s a piece of shit/when you look at it”, but Eric Idle’s life has been anything but. @michelemagwood

« What keeps you awake at night? “A fear of losing our freedom” – a Q&A with Khusta Jack
Rooney captures exactly what it’s like to be young and clever and just a little bit intoxicated with yourself, writes Rosa Lyster of Normal People »