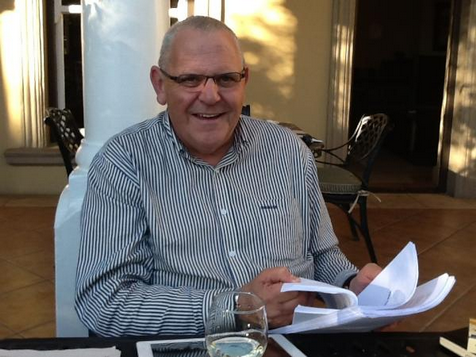 Stephen Johnson: the bon vivant bibliophile with a beautiful voice.

I was devastated to learn of the death of Stephen Johnson early in the new year.

When I was appointed Books Editor of the Sunday Times in 2000 he took me under his capacious wing. At that time he was the MD of Random House and we would meet in his office high on the Parktown Ridge, surrounded by bookshelves crammed with the greats: Brink, Van Onselen, Coetzee.

He talked me through how the book industry works – he had been MD of Exclusive books before that – and larded the information with much literary lore. And gossip, of course.

He was a bon vivant and had a beautiful voice; he loved classical music. He loved books as objects of art, not only their jacket design but their font, the weight of the paper. Most of all, he loved his authors.

He pushed and encouraged me as a book journalist, sending me to London to interview Sebastian Faulks and a hip young couple in their hip new restaurant called Moro; he knew they would make their mark and they have. Long before Ottolenghi, Sam and Sam Clarke put Mediterranean food on the British map. Years later he sent me back to London to the launch of Salman Rushdie’s memoir Joseph Anton, held in a smart nightclub and thronging with guests like Ian McEwan and Stephen Fry. When I returned he wanted to know every detail.

Over the years we shared many a meal and glasses of wine, but I saw less of him when he moved to Cape Town. I missed our discussions about who was writing what, and how well, or not.
He was a friend and a mentor and a great book man. He was a deeply cultivated man in an increasingly uncultured world. I will always be grateful to him.

When Stephen retired Antjie Krog made an outstanding speech at his farewell party in 2012. It was featured on BooksLive, and it is worth sharing it again:

It feels terrible to speak at something called a farewell function to Stephen Johnson. It immediately makes me feel like an orphan, like a minion without a Mafia Pappa, like a shareholder without her Magnate of the Published Word.

So I prefer to think about tonight not as a farewell, but as a celebration; and therefore want to present my contribution as a praisesong rather than a lament.

But first. A good praise singer goes out of her way to impress on the audience her bona fides – in other words what qualifies her to speak and how much weight her opinion should carry. I think I can say without fear of contradiction that I have published at more publishing houses than a prostitute has had clients on the R310 to Stellenbosch. So I am experienced and I can compare. I have also learnt some lessons of which I will share only one: Beware of the very thin publisher!

You know what I am talking about. Those who arrive from finance departments with the demeanour of replaceable bank managers, displaying meagre spiritual egos born of housekeeping desire and bookkeeping abstraction. Those who move swiftly, leaving bleeding gaps and who prefer doling out to giving. They are clones; one cannot befriend them.

No, let us celebrate the not-so-thin ones, because the publishers with which I have taken the biggest risks and produced the greatest success are above all lovers of life. They carry in a perfectly congruous way mentally and physically the idea of joyous largesse, a certain superfluity and the pure pleasure of riot.

These publishers, of which Stephen is one, first of all LOVE books. They touch paper in a way which convey that their somewhat plumb fingertips are beehives bursting with lustful senses, they caress book covers with their knuckles as if they touch a beloved’s face, they talk about books always with heartbreaking maternal intimacy. For them, the heart of the book and the beauty of the book are inseperable.

Yes, the true lover of books is alive to the world. These rare publishers, of which Stephen is one, have distinguished tongues and discerning palates. Therefore, every writer blessed to have been published by someone like Stephen will remember som exquisite trance-like events steamed in the pleasures of merlot, marrow and metaphor. Writers who often have to mould themselves on rigid self-denying self-discipline, find it miraculous to be with someone who, like yourself, experiences the world sensually. At last you get spoilt and you rot willingly with noble bliss.

Whether at lunch or dinner, in a hotel room or a taxi, an office or a meeting – with Stephen it is always underpinned with exquisite textures slanting from windows, gleaming from porcelain, glowing from dark wines, cusping off glass. Yes, one finds oneself with somebody who, like the philosopher Martin Versveld, believes that we make the world human through food; that the world as food is the world and the word humanised; that an eaten world is an intelligible word, a word in which body and spirit are united.

Completing the full passion spectrum of these earth epicureans, of which Stephen is one, is the love for classical music. Not the run-of-the-mill Fine Music Radio favourites, but experts on German lieder, choral works, great pianists, operatic voices. A drive with them in a car is like unexpectedly encountering a diva: the fingers playing the notes molto espressivo on the steering wheel or bellowing the highest coloratura notes in ecstatic dewlapping whispers.

The good life, the righteous life then, as a publisher like Stephen knows so well – and through him, we – is the convivial life, because our very universe is actually a convivium – a meal together.

In my books – and remember I have been plying my trade for four decades 0 Stephen Johnson is a fantastic and successful publisher. Here are the facts of my before-Stephen and after-Stephen life: since he took me out for tea at Zerbans in the Gardens Centre seventeen years ago he changed me from a middle-aged penniless radio-reporting Afrikaans poet with the name of Samuel to a freelancing non-fiction battle axe with a terrible English accent, with access to Voyager miles and a separate income tax number, and the name of Krog. I still regularly get a cheque from Shuter and Shooter for R52.13, dating from my time before Stephen, but I now no longer get money BACK from SARS.

Apart from the fact that Stephen should be professor in How to Make Beautiful Books and Sell Them Successfully, he is a writer’s dream: he is as creative as yourself, he thinks about possibilities that have never crossed your mind, he is a discerning manuscript reader and can tell very quickly whether a manuscript is working. If it “works”, he throws himself behind the coming book with the neat and thrilling energy of a DA march. Nothing will be overlooked: not the font, not the launch, not the future of the book nor a potential clash with COSATU.

Once a woman stopped me at the Cape Town International Airport and said: would you please tell the people who made Country of My Skull that it is the most beautiful book I have ever held in my hands? I give it to people not too read, but to hold.

This happened because, for my first and second book (A Change of Tongue) Stephen put together nothing less than an astonishing A-team: the meticulous dedicated Douglas van der Horst who noticed everything, knew everything and talked about shades, fonts and paper like other men talk about rugby or babes. Then there was the inimitable Abdul Amien who would take from the shelf of the National Library a book with the title Atlas Ichtyologique des Indes Orientales Neerlandaises, volume 6, by P Bleeker, published between 1866 and 1872, for Tongue‘s cover. And with unfailing vision Stephen, already in those years, identified Ivan Vladislavic as the best editor in the country.

Stephen not only became my favourite publisher with his excellent literary intuition, but with his empathy and generosity he became my friend and directed the weal and woe of my English literary career with compassion, humour and objectivity. We went through tough times him and me, but whether we were in or out of the closet, in or out of fashion, swinging swords against accusations of plagiarism, we could do it with the knowledge that the other one holds his or her integrity in high regard. Stephen Johnson is the kind of person that I like to have at my side: for his joy at life, his incomparable English – whether speaking or writing – his sensitive creativity, his eye for beauty and last but not least, his character, more often than not burdened with integrity.

Let us drink a toast to a wonderful publisher!

« Creative writing workshop with Bronwyn Law-Viljoen (25-30 January 2019)
BooksLIVE has joined the Sunday Times’ website – and can still be enjoyed for free! »