Archive for the ‘Human & Rousseau’ Category

Lowveld Book Festival 2018: Save the date! 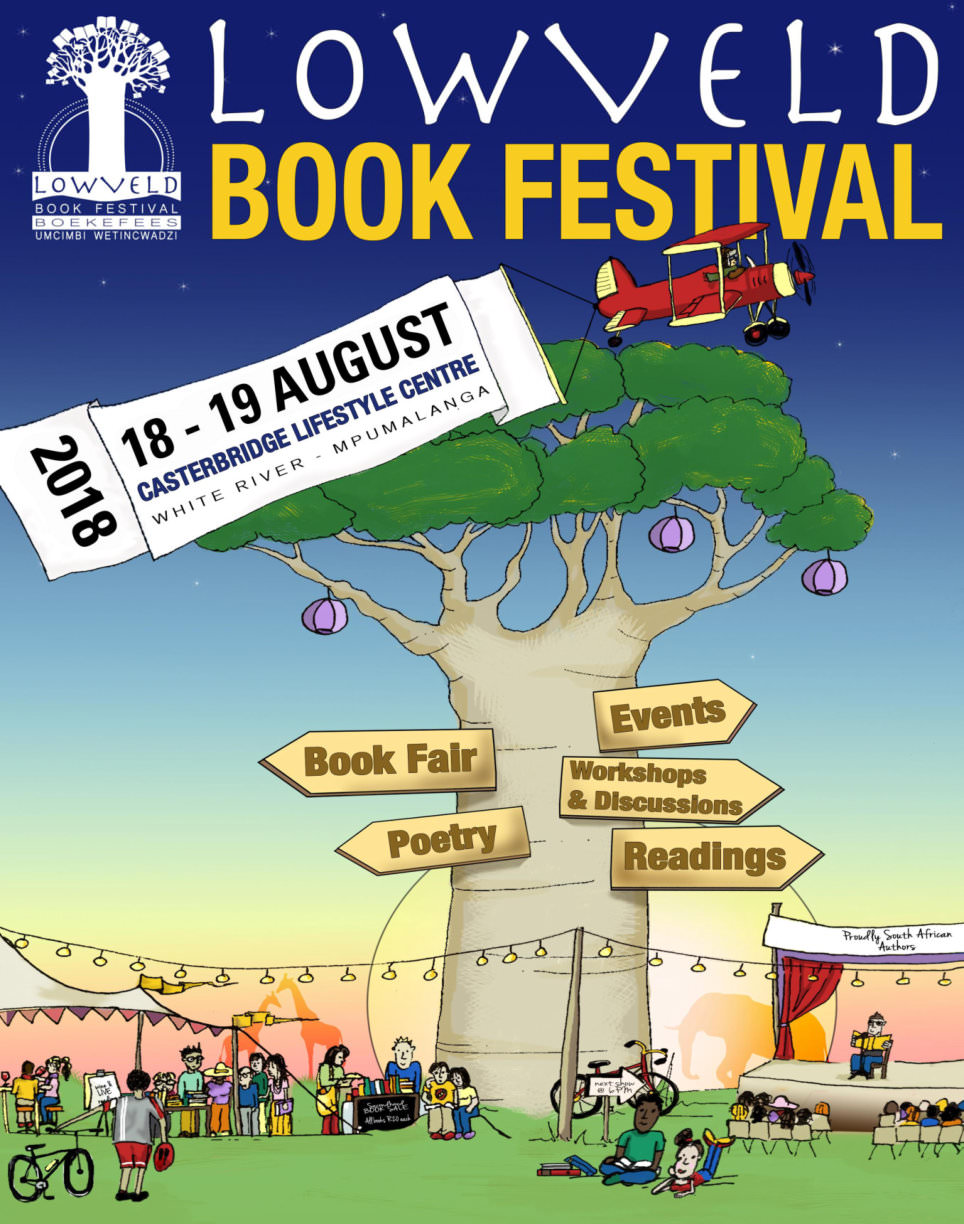 The Lowveld Book Festival is fast-becoming a not-to-be-missed event on literary calendars across South Africa!

It’s time to save the dates in your diary as this year’s festival will take place at the Casterbridge Lifestyle Centre, in White River, on 18 and 19 August 2018, whilst the business breakfast and outreach activities will take place on Friday 17 August.

Adam Cruise will also be one of the facilitators and will be joined by Lowveld Living’s Nicky Manson and renowned local author Jayne Bauling as well as Bobo Lukhele, news editor at the SABC in Mpumalanga and Alison Lowry who is the ex-CEO of Penguin Publishers and an independent editor.

A balanced programme is on the cards, including poetry, workshops, kids’ corner and story-time for youngsters, panel discussions, historical Lowveld literature, nature lovers’ presentations, interviews with authors, youth literature, a book club segment, a cooking demonstration, a locally written and produced movie as well as the South African Music Show put on by the CMDA which will include well-known songs by some of our best loved local musicians.

The Lowveld Book Festival is a multi-cultural event that encourages a love of reading and acknowledges the role played by writers and poets in society. The 2018 Lowveld Book Festival will again reach out to surrounding rural schools to expose children to the joy of stories and reading; encourage teenagers to read more, whether electronic or printed books; and to support local writers and illustrators through workshops hosted by published authors. 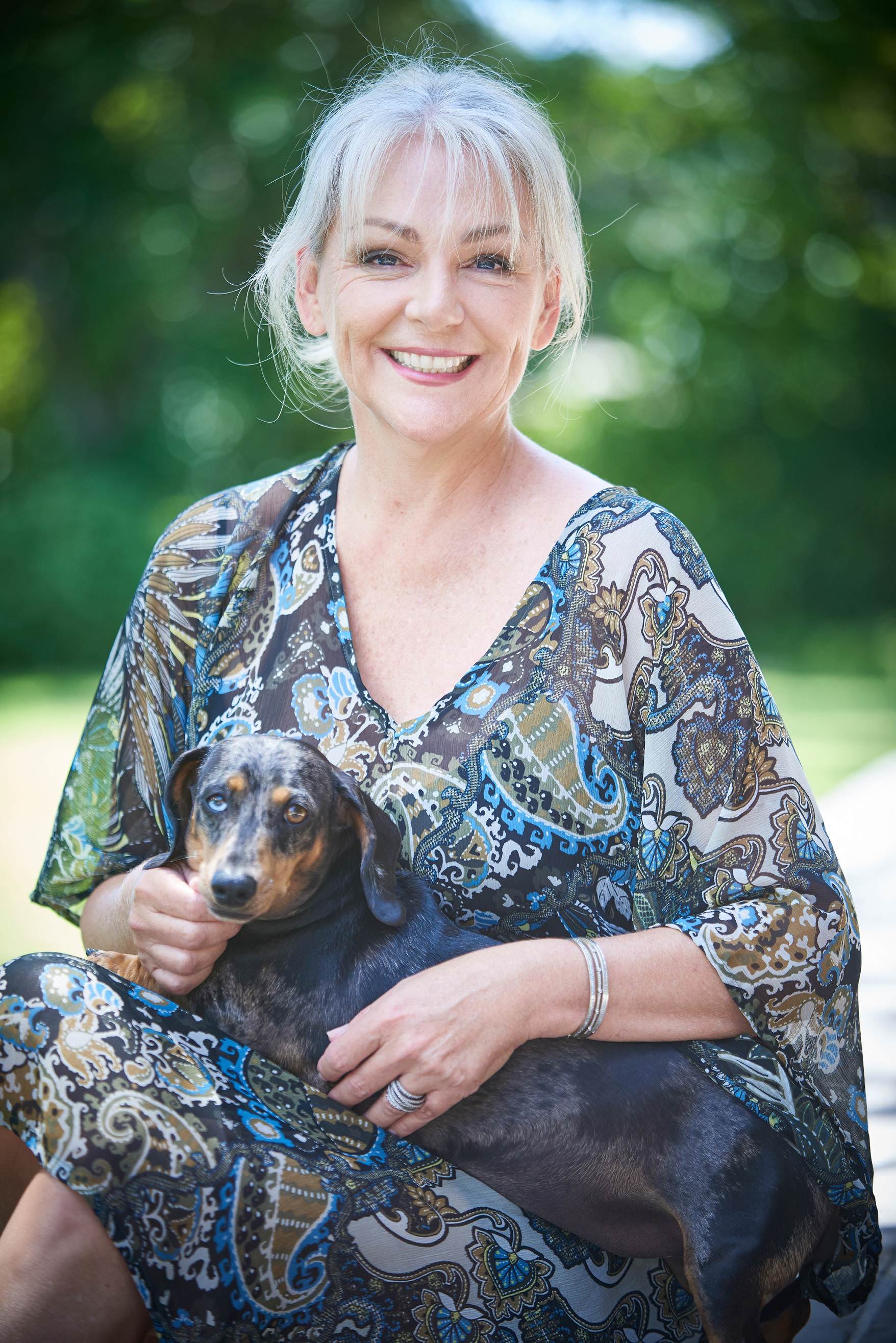 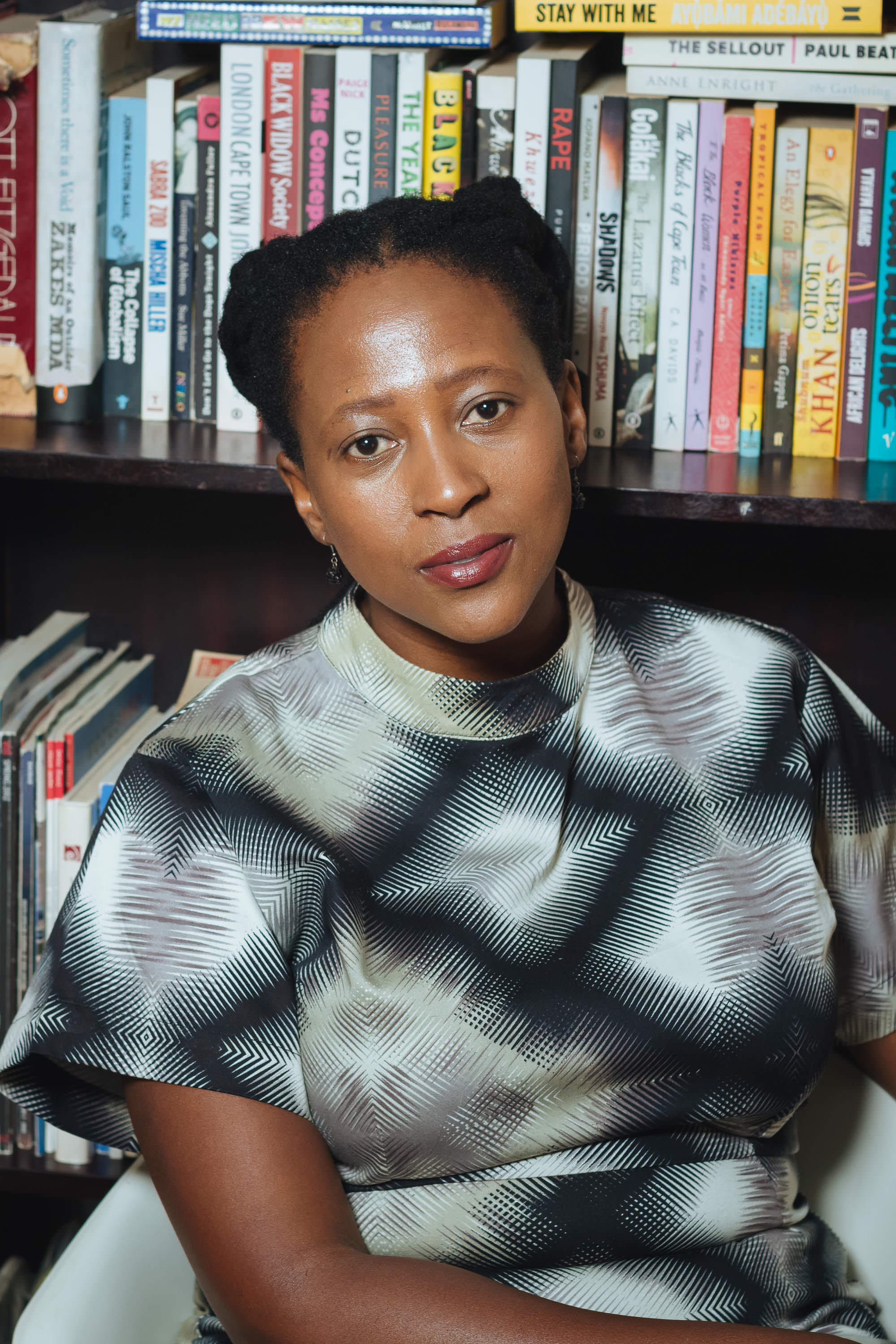 A new year, a new pile of books to read…

A new year, a new pile of books to read. Here are some highlights to look forward to in 2018, as compiled by Michele Magwood. 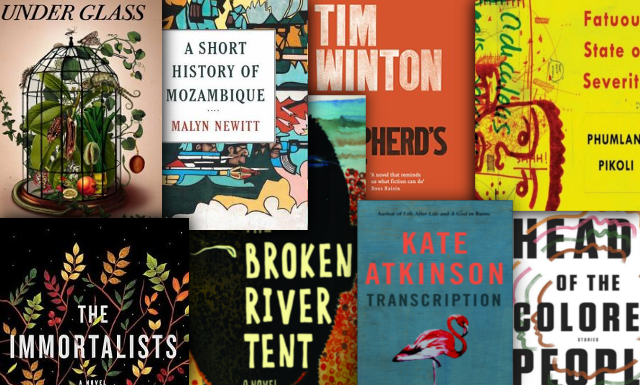 The Immortalists by Chloe Benjamin (Headline)

Four siblings are told the exact date of their death by a psychic. The novel traces their lives over four decades in a story described as “a moving meditation on fate, faith, and the family ties that alternately hurt and heal”.

Under Glass by Claire Robertson (Umuzi)

The much-anticipated third novel from the award-winning author, set on a sugar estate in 19th-century Natal and chronicling the lives of the Chetwyn family. A deeply researched historical novel and an intriguing mystery, it is described as “a high-stakes narrative of deception and disguise”.

What Are We Doing Here? by Marilynne Robinson (Little Brown)

A new essay collection from the Pulitzer Prize-winning novelist that examines the political climate and the mysteries of faith. She offers hope and a call to action.

A brilliant take on JM Coetzee’s classic that explores the weight of history and of conscience, by one of South Africa’s most compelling young authors.

Nechama Brodie is a welcome new voice on the krimi scene. This is a disturbing story set in Johannesburg that wrangles sangomas, disillusioned cops and animal poaching.

Setting aside his popular detective Harry Hole, Nesbo takes on Shakespeare’s immortal story. “It’s a thriller about the struggle for power, set both in a gloomy, stormy crime noir-like setting and in a dark, paranoid human mind,” he says.

A Spy in Time by Imraan Coovadia (Umuzi)

A new novel from the award-winning Coovadia always creates a buzz. Here he imagines a futuristic South Africa, where Johannesburg has survived the end of the world because of the mining tunnels that run beneath it.

The Winds of Winter by George R.R. Martin (HarperCollins)

Has a book ever been as eagerly awaited as this? The sixth novel in the fantasy series on which the TV show Game of Thrones is based is due for release this year. But then, it was due last year too.

Tsk-Tsk: The story of a child at large by Suzan Hackney (Jonathan Ball Publishers)

In a style reminiscent of Alexandra Fuller’s Don’t Let’s Go to the Dogs Tonight, Hackney writes of a childhood on the run, fighting to survive in a world of abandoned and abused children.

Surely one of the best titles of the year, it’s the story of a boy growing up in Hillbrow in the ’60s and his friendship with an eccentric homeless person.

The acclaimed Australian author leaves his familiar coastland settings and heads for the interior to the saltland next to the desert. A young runaway is on a desperate quest to find the only person who understands him. Described as “a rifle-shot of a novel – crisp, fast, shocking – an urgent masterpiece”.

The popular author’s new novel is based on the life of a female former Secret Service worker. Sure to be another runaway bestseller.

A comprehensive overview of 500 years of turbulent history, from its modern origins in the Indian Ocean trading system to the 15-year civil war that followed independence and its lingering after-effects.

The much-awaited English translation of Karin Brynard’s bestseller Tuisland. Captain Albertus Beeslaar is about to hand in his resignation when he is sent on one final assignment to Witdraai.

The shocking story of TV star Tracy Going’s abusive relationship that emerged when her battered face was splashed across the media in the late ’90s. She writes of her decline into depression and the healing she has finally found.

An entrancing novel that marries imagination with history, set in the time of Maqoma, the Xhosa chief at the forefront of fighting British colonialism in the Eastern Cape in the 19th century.

The Fatuous State Of Severity by Phumlani Pikoli (Pan Macmillan)

A fresh collection of short stories and illustrations that explore the experiences of a generation of young, urban South Africans coping with the tensions of social media, language and relationships of various kinds.

Born in Chains: the diary of an angry ‘born-free’ by Clinton Chauke (Jonathan Ball Publishers)

Debut author Chauke shows how his generation is still affected by apartheid policies but writes with wit and a unique sense of humour about his life. It’s a story of hope and perseverance, and of succeeding against all the odds.

The Golddiggers: A Novel by Sue Nyathi (Pan Macmillan)

The Zimbabwean author recounts the experiences of her fellow compatriots trying to make a life in Jozi. The stories of these desperate immigrants is both heart-breaking and heartwarming.

Subtitled “How to Make the Most of Uncomfortable Situations” New York Magazine’s Dahl offers a thoughtful, original take on what it really means to feel awkward, relating all sorts of mortifying moments and how to turn them to your advantage.

One of the most talked-about books coming in 2018. Described as unsettling and powerful, it is an extraordinary debut novel about a young Nigerian woman, Ada, who develops separate selves within her as a result of being born “with one foot on the other side.” Lady Anne is one of Antjie’s Krog most acclaimed poetry collections. It was released in 1989, in the last tumultuous decade of apartheid, and received the Hertzog Prize in 1990. In an attempt to make sense of her own existence, Krog juxtaposes her own life in the midst of a world of racial injustice and discrimination, against that of the life and times of Lady Anne Barnard, of Scottish descent, during her stay in the Cape Colony in the late eighteenth century. Ultimately the collection transforms into a document of multiple voices, highlighting the complexity of a colonial legacy – still relevant 26 years later.

This English edition is done in collaboration with Bucknell University Press, US.

Stephen Clingman: “There is a rugged, gripping quality to Krog’s language, digging deep into the nature of South African life and her own self-challenging life
to it.”

The Shallows: translation of Ingrid Winterbach’s Vlakwater to be released on Wednesday The English translation of Ingrid Winterbach’s Vlakwater (2015) will be released on the eighth of March.

After separating from his partner, painter Nick Steyn moves to Cape Town’s City Bowl. He soon befriends the young boarder who moves in with him. One night she doesn’t return home and his attempts to trace her prove futile. A few weeks after her disappearance, prosperous artist Buks Verhoef makes an offer on Nick’s house. Nick starts to wonder whether these events are related and, if so, could Nick’s former friend, the author of the outrageous novel The Shallows, Victor Schoeman, be involved?

In true Winterbach-style, a parallel narrative interlinks the novel’s characters and events.

An anonymous Stellenbosch woman writing a monograph on the famous Olivier brothers witnesses the murder of Buks Verhoef in a coffee shop. Soon thereafter a sinister man starts stalking her. Could this menacing stranger possibly be Victor Schoeman?

Fantastical, absurd, and haunting, The Shallows, translated by Winterbach-veteran Michiel Heyns, is a must-read for anyone who appreciates masterful storytelling.

The Cape Winelands are home to some of South Africa’s top restaurants and can be thought of as the culinary epicentre of the country. The cuisine of the area has been influenced over hundreds of years by a mixture of cultures (Dutch, French Huguenot, Cape Malay) to form the rich gastronomic heritage which is celebrated in Cape Winelands Cuisine. Written by Hetta van Deventer, the culinary manager at wine estate La Motte’s award-winning Pierneef à la Motte restaurant, the book covers traditional and contemporary recipes from the Winelands, with a focus on Cape herbs and spices and cooking with wine.

Alert! The shortlists for the 2010 M-Net Literary Awards have been announced – including the lists for second annual film awards, given for works of fiction that are, erm, eminently filmmable.

Each M-Net prize carries a purse of R30 000. Last year, Anne Landsman, Etienne van Heerden, Mathethe Molope, Tsireledzo Mushoma and Deon Meyer won the English, Afrikaans, Sepedi/Sesotho, Nguni and Film awards, respectively. The awards have traditionally been associated with the Via Afrika Awards, but this year there’s been a split (for reasons unknown), and the ceremonies where winners are announced will be held separately.

It’s great to see BOOK SA members Imraan Coovadia, Eben Venter, Jacques Pauw, Andrew Brown and Jassy Mackenzie in the 2010 mix. It bears pointing out that this is the third major shortlisting for Coovadia’s High Low In-between, which is also up for the R75 000 Sunday Times Fiction Prize, and has already won the R60 000 University of Johannesburg Prize.

We’re looking at a lot of books, so without further ado:

Good luck to everyone!

Alert! Exclusive Books launches the 2010 edition of its Homebru promotion today in Johannesburg.

As always, there’s room for debate about said list: where’s Antony Altbeker’s Fruit of a Poisoned Tree, for instance, or Lauren Beukes‘ Zoo City – ? And you’d think Fiona Snyckers would be in with a shout with Trinity on Air. (Last, how splendid would it be to see a Modjaji Books title in Homebru lights?) But that, perhaps, is a debate for a different day: today we congratulate those who’ve landed a place.

One item of interest: this year’s list includes a CD in addition to its standard fistful of reads, the Putumayo Africa and SA Legends Pack – a reminder that Exclus1ves.co.za isn’t just about books anymore.

Here is the 2010 Homebru selection: