Archive for the ‘Law’ Category

Dagga: A Short History is a literal embodiment of ‘dynamite comes in small packages’. It is incredibly comprehensive and enlightening for such a small volume, and an easy to read book at that. Crampton lays a foundation for what I hope will be a serious, far-reaching debate over the legalisation of Dagga in South Africa.

17 of the Best South African Book Covers from 2015

South African readers were spoilt with a fantastic variety of book covers this year. We’ve collected together our favourites of the English publications (Afrikaans list to come soon). Feast your eyes!

Which is your favourite cover from 2015? Let us know on Facebook, Twitter or in the comments below! Sibanda and the Death’s Head Moth by CM Elliott
Cover design: publicide
More about the book Be A Hero: Lessons For Living A Heroic Life by Alan Knott-Craig and Craig Rivett
Cover illustration: Mia du Plessis
Book homepage
More about the book What About Meera by ZP Dala
Cover design: publicide
Book homepage
More about the book To Quote Myself by Khaya Dlanga
Cover design: K4
Book homepage
More about the book Showdown at the Red Lion: The Life and Times of Jack McLoughlin, 1859–1910 by Charles van Onselen
Cover design: Michiel Botha
More about the book Crampton is best known for books that take one on near-fantastical trips into South Africa’s past, and there are a few moments of historical speculation that are presented as fact here, but it’s nevertheless compelling. It seems perfectly reasonable to accept that dagga has been used in southern Africa for more than 1 000 years, from Great Zimbabwe to the shores of the Western Cape, where Jan van Riebeeck first wrote about it in 1658. Incidentally, Crampton also writes that there’s evidence that the Israelites of the Bible smoked dagga for religious purposes.

The SALAs honour writing and writers in all official languages across 10 categories, and include the K Sello Duiker Memorial Literary Award, the First-time Published Author Award and the Nadine Gordimer Short Story Award.

The SALAs were founded in 2005 by the wRite associates and the Department of Arts and Culture.

Michele Magwood of the Sunday Times will receive the Literary Journalism Award.

The SALA ceremony will be held at the Tshwane Events Centre on November 7, 2015.

The full list of this year’s SALA nominees are:

Congratulations to all the nominees!

Celebrating 10 years of growth and exhilarating success, the South African Literary Awards (SALA) will honour over 10 South African authors at a celebratory awards ceremony to be held at Tshwane Events Centre, Tshwane, Gauteng Province on November 7, 2015.

The prestigious South African Literary Awards were founded in 2005 by the wRite associates, in partnership with the national Department of Arts and Culture, as a platform to honour authors, writers, poets and literary practitioners who made and continue to make a contribution in the literary landscape in South Africa.

The list of nominees reflects the transformative nature not only of SALA, but the country’s literary community. The potpourri nature of the country provides a canvas on which writers manage to paint beautiful pictures without needing to look over their shoulders.

SALA honours writing and writers in all official languages and writers across 10 categories. They are K Sello Duiker Memorial Literary Award, which is a celebration of one of the country’s most prolific authors of his generation, K Sello Duiker. First-time published writers are also acknowledged and honoured by the Awards. The other is the Nadine Gordimer Short Story Literary Award, honouring thespians in the genre, across all languages. In addition, there are:

The SALA has grown in leaps and bounds from when it started with only one category: the National Poet Laureate Prize and later followed by the Lifetime Achievement Literary Award, bestowed on luminaries across the land.

For enquiries and more information: The Daily Maverick has revealed some of the participants for this year’s edition of The Gathering.

The event will take place on 11 June at The Dome at Vodaworld. A ticket costs R950, VIP tickets R2 950, and group/student deals are available. Meals, refreshments and goodie bags are included.

Announcing the Shortlists for the 2015 Media24 Books Literary Awards Alert! The shortlists for the 2015 Media24 Books Literary Awards have been announced.

The Media24 Books Literary Awards are awarded to books published between 1 January and 31 December 2014 by the Media24 Books group. The winner in each category will receive R35 000. In the category Illustrated Children’s Books, the author and the illustrator will share the prize money. This adds up to a total prize money of more than R200 000 to be awarded this year.

The winners will be announced at a special event at the Hilton Hotel in Cape Town on 5 June.

Without further ado, here are the shortlisted titles:

Media24 notes in the press release that four titles are included in this year’s WA Hofmeyr Prize shortlist owing to the quality of the works.

The Jan Rabie Rapport Prize, for a debut work in Afrikaans, will be announced at the kykNET-Rapport Book Prizes later this year.

Congratulations to all the shortlisted authors!

The 10 Biggest Non-fiction Book Launches of 2014

If it is possible for South Africa to have an uneventful and restful year, 2014 was certainly not one of them.

The year started with the inevitable big, bold promises the go hand-in-hand with general elections. These were accompanied by equally bold but marginally more down-to-earth commentary about leadership. Still reeling from the loss of Nelson Mandela, the nation contemplated its position after 20 years of democracy. The Oscar Pistorius murder trial brought law to the fore, while parliament was at its most theatrical.

With the great whirl of events, chaos and information that characterise this country, great books that critique, celebrate and comment on the state of things are necessary. Books that do this warrant celebration. The good, the bad and the ugly of South Africa this year came out in the books most celebrated.

Which non-fiction book launch of 2014 stood out for you? Let us know on Facebook, Twitter or in the comments below.

Here are the 10 most popular non-fiction book bashes of 2014, according to Books LIVE web analytics: 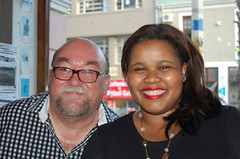 Donwald Pressly’s Owning the Future: Lindiwe Mazibuko and the Changing Face of the DA Launched at The Book Lounge

23 January: Supporters of Lindiwe Mazibuko turned out in droves to attend the launch of Donwald Pressly’s impressive biography, Owning the Future: Lindiwe Mazibuko and the Changing Face of the DA at The Book Lounge.

In response to the scores of replies to the invitation to this event, bookshop staff set up a standing room only area upstairs and provided seats and amplification for the elderly (or weary!) downstairs. The bookshop was heaving with eager readers at least an hour before the speakers arrived.

20 February: In the fractious weeks heading towards the national elections, a fascinating, feisty and fiery event took place at The Book Lounge, the launch of The Fall of the ANC: What next? by academics Prince Mashele and Mzukisi Qobo. The book is a searing critique of South Africa’s ruling political party, and the event brought together a capacity crowd. “Wherever we go, whomever we talk to, outside the ANC or inside the ANC, people agree that something is fundamentally wrong!” These opening words kicked off the event … 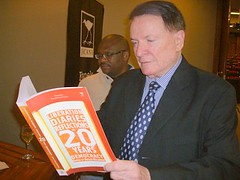 50 people contributed to the book, which was edited by Busani Ngcaweni, public servant in the Presidency and regular writer for newspapers and journals. 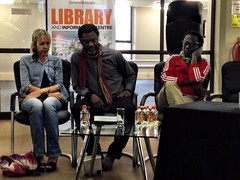 15 May: A library might seem an odd place to discuss a personality as loud as Brenda Fassie’s, but this venue choice turned out to be the right one for Bongani Madondo’s I’m Not Your Weekend Special: Portraits on the Life + Style and Politics of Brenda Fassie.

Madondo participated in a panel discussion with journalist Janet Smith of The Star and Mabusha Masekela – nephew of Bra Hugh and a professional in the entertainment industry himself.

29 May: Shani Krebs is a man with a story that will make your hair stand on end. At the Cape Town launch of his memoir, Dragons and Butterflies, held at Bargain Books in Canal Walk, he spoke of his experiences over 18 years in Thailand’s notorious Bangkwang Central Prison.

The author spoke passionately about his consciousness-raising efforts, in particular his call on the Thai government to abolish the death penalty.

19 June: Zelda la Grange’s memoir of her time as Nelson Mandela’s personal assistant, Good Morning, Mr Mandela, was launched at a glittering event at The Venue in Melrose Arch, with the who’s who of South African politics present.

In Good Morning, Mr Mandela, La Grange reveals how she grew up in an “apartheid household”, even voting “no” in the 1992 referendum, but says that when she met Madiba in 1994 her whole perspective changed.

Richard Poplak Launches Until Julius Comes: The EFF Will Change the Way Politics is Done in This Country

The launch was prescient, as the very next day Julius Malema and the Economic Freedom Fighters (EFF) disrupted parliament in spectacular fashion.

Searching for Babyshoes: Barry Bateman and Mandy Wiener’s Behind the Door Launched in Johannesburg

7 October: Barry Bateman and Mandy Wiener launched their book, Behind the Door: The Oscar Pistorius and Reeva Steenkamp Story, in the company of Carte Blanche presenter Bongani Bingwa on Tuesday, 7 October, at Primedia in Johannesburg. Congratulations to Neliswa Hlongwane, who has won five books of her choice from this year’s Exclusive Books Homebru collection.

Neliswa chose Clever Blacks, Jesus and Nkandla: The Real Jacob Zuma in His Own Words by Gareth Van Onselen, Lost and Found in Johannesburg by Mark Gevisser, Dear Bullet: Or A Letter to My Shooter by Sixolile Mbalo, Justice: A Personal Account by Edwin Cameron and Oliver Tambo Speaks edited by Adelaide Tambo.

If you missed out this time, keep an eye on Books LIVE as we have a number of competitions up our sleeve for the next few weeks.

There are 48 books on the list, including the shortlists for this year’s Sunday Times Alan Paton Award and Fiction Prize, the winners of which were announced last Saturday.

Non-fiction fans are also spoilt for choice, with titles including Lost and Found in Johannesburg by Mark Gevisser, Gareth van Onselen’s Clever Blacks, Jesus and Nkandla: The Real Jacob Zuma in His Own Words, Tony Leon’s Opposite Mandela, Justice: A Personal Account by Edwin Cameron and Zelda la Grange’s explosive memoir Good Morning, Mr Mandela, which is already taking the country by storm.